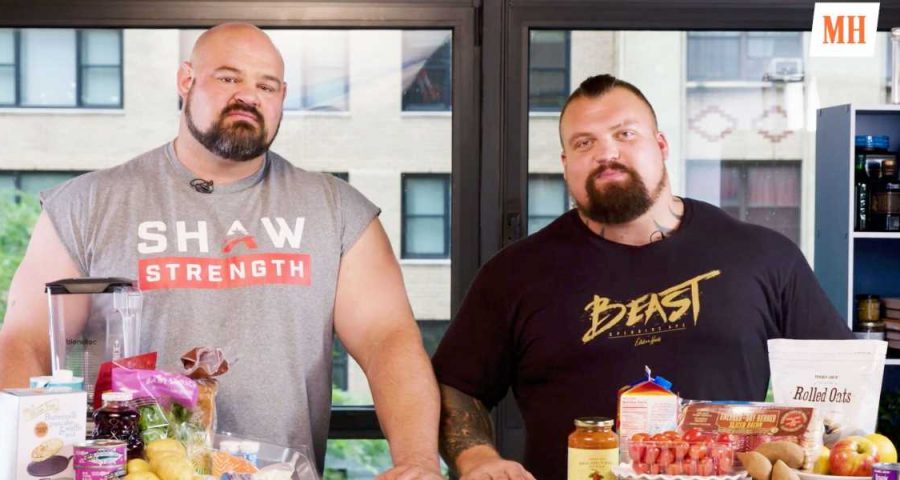 The giants turn heads as they enter the Men’s Health offices (walking through the door one at a time, of course): Brian Shaw, 6’8” and weighing in somewhere between 400 and 440 pounds, and Eddie Hall, 6’3” and a svelte 300 to 360 pounds himself. (Both men have recently begun slimming down, even if it didn’t seem like it when they had to share a plane row.)

The two strongmen, who boast five World’s Strongest Man titles between them (four to Shaw, one to Hall) can be seen on the History Channel’s Strongest Man in History show, in which they take on some of the most legendary feats of strength ever recorded. But their own diets are remarkable in and of themselves. The two men consume close to 10,000 calories a day. Each. (Before you get concerned, know that both Hall and Shaw—as well as many strongman—work closely with dietitians.)

Shaw and Hall also each work out for close to three hours each day. Being big and strong is their 9 to 5. “It’s literally like doing an eating challenge every single day,” says Shaw.

Damn. Here’s how they do it.

“First thing in the morning, it’s very important to eat quickly,” says Shaw. “So I’m reaching for eggs.” That’s six to eight whole eggs. Scrambled. The eggs are served with two to three cups of cooked rice and orange juice with blended spinach.

From there, his meals get progressively less fancy. The second meal has Shaw consuming a 12 oz. ribeye and two to three more cups of cooked white rice. Third meal: 12 oz of ribeye, rice, and a sweet potato—like a big sweet potato. Fourth meal: ribeye steak, two to three cups of white rice and carrots.

After his son gets home from school, Shaw and son share a meal, “monster mash,” which includes ground up ribeye with rice. The strongman then gets to be a dad for a few hours before heading to his three-hour afternoon training session. During the session, Shaw mixes carbohydrate and amino acid powder into a shake, which he sips throughout the workout. When he’s done, he’s on to another protein shake.

Shaw’s final meal (would you call it dinner?) consists of another ribeye, more rice, and another massive sweet potato. And maybe a piece of cheesecake—he says it depends on the day.

Hall starts his morning morning with a liter of water. “Just to wash everything out and get the organs going,” he says. Then he has “first breakfast”: four eggs, five to six pieces of bacon, four to five pieces of sausage, toast, beans, and tomatoes. Then a liter of cranberry juice. Again, to help flush the system.

Hall then heads to the gym, earlier in the day then Shaw. He cranks out a two-and-a-half hour workout with more cranberry juice for carbs and beef jerky snacks for amino acids and proteins. When the workout ends, Shaw drinks a liter of protein shake with milk.

Hall’s fourth meal begins around 3 p.m. and includes burger patties, apples, and bananas. He picks his kids up from school soon after, when he might “indulge” in a chicken nugget. But then it’s back to more steak, more pasta, more rice, and more fruit.

Dinner time is prime time: two pounds of meat, two pounds of carbs … and then the other half of the cheesecake. Again, that’s a family size cheese cake.

He downs a protein shake and a protein bar before bed—then it’s up early with another liter of water to start the process over.