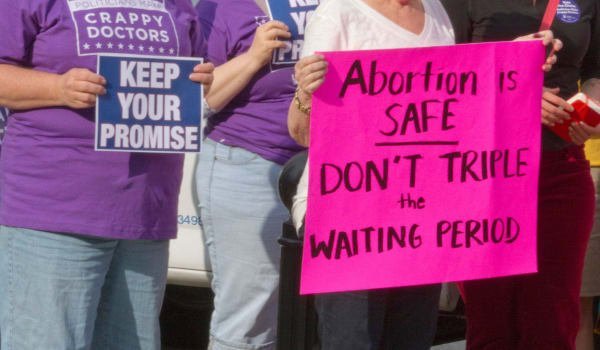 Let’s get something straight right now: You are allowed to feel however you want about your abortion. You can be relieved, happy, sad or guilty. You can not know how you feel until much later or ever. You can regret it. You can feel none of these things or all of them — at once or at some point. Your abortion is your own experience, and no one gets to tell you how to feel.

There’s a difference between having complicated and/or sad feelings about your abortion and abortion resulting in mental harm. Postabortion syndrome (also known as postabortion stress syndrome) is a “disorder” touted by the anti-abortion community in which they claim abortion results in irreparable damage to one’s mental health, resulting in depression, suicide and the desire to avoid children and pregnant people after having an abortion.

In 2017, Advancing New Standards in Reproductive Health released the Turnaway Study, a direct response to a 1988 call by former U.S. Surgeon General C. Everett Koop for a long-term study on abortion and mental health. The study concluded that abortion did not adversely affect people’s mental health, either at the time of the procedure or five years later. Being denied an abortion, however, did impact one’s mental health, resulting in low self-esteem, dissatisfaction with life in general and anxiety. In other words, there’s definitely a relationship between being unable to access abortion care and a lower quality of mental health.

“Evidence-based medicine has consistently shown that the No. 1 emotion women experience after an abortion is relief,” Dr. Carly Snyder, a perinatal and reproductive psychiatrist, says. “There is no credible data indicating any increase in mood disorders following voluntary termination.”

You might experience sadness, especially in a situation where you wanted to be pregnant but ultimately decided to have an abortion after finding out about a birth defect or other fetal anomaly, but Snyder stresses that these feelings aren’t induced by the abortion procedure itself.

Carrie* was 20 and studying abroad in Europe when she got pregnant and knew immediately that she’d be getting an abortion. It was physically painful, she says, and she had anxiety about going to the gynecologist afterward, but “I don’t even remember feeling especially sad. I always emotionally approached my abortion with a sense of contemplation — even now, I sometimes marvel at the ‘wow, I could have an 11 year old kid today!’ thing, but it never felt traumatic.”

What did cause anxiety, she says, was the fear that she wouldn’t be able to actually connect with an abortion provider and the experiences she had being judged by the doctors she met.

Abortion stigma, a set of ideas perpetuated about abortion being dirty, dangerous and immoral, among other things, impacts the way we feel about our abortions. It can be hard to separate the messages we’ve received about how we should feel when accessing abortion care (sad, traumatized, guilty) versus how we actually feel. The feeling of relief that many experience postabortion is seen as incompatible with the idea that people with vaginas should always welcome and anticipate pregnancy regardless of circumstances or whether or not they actually want to become parents.

“A lot of times, the sadness around abortion isn’t about the abortion itself, as [postabortion syndrome] suggests,” says Steph Herold, a public health researcher who focuses on abortion. “It can be about the context of the abortion, what’s surrounding it, like a terrible ex or realizing you’re not ready for parenthood.”

According to Herold, Charlotte Taft, (former executive director of the Abortion Care Network) used to say that “pregnancy shines a light on a person’s life and makes you examine everything that’s going on to see if you want to or are able to bring life into the world. And for some, that evaluation leads to sadness even if the abortion is the right decision.”

“I definitely had mental health effects after my abortion,” Jane* says. “It scared me as I thought to myself, ‘This confirms my feeling that I will be prone to postpartum depression.’ But it had nothing to do with feeling sad about having the abortion. I wasn’t sad about it as in losing the kid. I’m prone to anxiety and depression anyway.”

Here’s the bottom line — mental health is complicated, and there are many things in our lives that dictate how we’re experiencing the world and our own emotional landscapes at any given moment. Abortion is a medical procedure that everyone is entitled to be able to access safely and with dignity.

*Names have been changed.