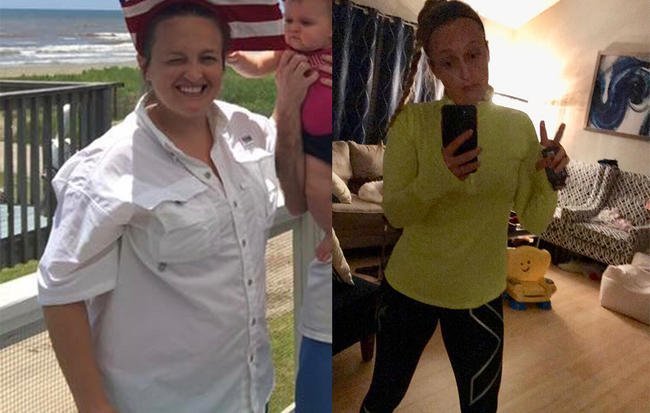 I first started running in January 2014, and in February 2015 I found out I was 10 weeks pregnant. Then, in April 2015, I was training for a half marathon when I found out I had cervical issues and had to stop running.

I was lost — so unbelievably lost. My daughter was born in October 2015, and we ended up in the hospital for a week with her when she was only 21 days old. That’s what started a myriad of health issues for her and a downward spiral into a deep postpartum depression for myself. She had two surgeries in 2016, and I fell deeper into a depression as she continued to be frequently sick. December 2016, I finally hit rock bottom and told my husband I needed help.

I needed to start running again because I needed something to help me feel better. I didn’t want to be medicated. I resumed running in January 2017, and I signed up for a half marathon, but kept thinking “what will I do once that’s over?” I checked the Houston Marathon website and signed up. I ran my first marathon in January 2018. As with most running journeys, there was sure to be some weight loss. I weighed 77 kilograms in January 2017 and in December 2017, I was down to 63 kilograms.

The marathon was kind of me coming out to my family about my depression, because no one other than my husband knew how much I truly struggled. I encourage any mums out there suffering to get help. Do not stay silent. It is normal, and you have done nothing wrong. Do not try to fight postpartum alone. You are loved and you’re doing an awesome job at being a mother.

I joined one of the best running clubs ever — the Cypress Running Club — and have met some of the greatest, most encouraging people I have ever encountered. I currently run four to five days a week. Mondays I strength-train and usually do a step aerobics class. Tuesday, I do tempo runs between six and eight miles. Wednesday I strength-train and do an easy 9.5 km recovery run. Thursdays I do a 10 to 15 interval training run. Fridays I do runners yoga and stretching. Saturday I go do my easy long run with the Cypress Running Club. Sundays are runners yoga and stretching and lots of foam rolling as well.

But the best part part of my journey has been running out of postpartum depression. I didn’t handle my depression in the best way to begin with. I should have asked for help or told someone I was struggling as bad as I was sooner. Running has allowed me to not take medications for the postpartum depression, but also be a better mother to my daughter and wife to my husband. Running has allowed me to find myself again, and to appreciate the fact that I’m alive and loved tremendously by the people in my life.

If you are worried about yourself or someone in your care, the best thing you can do is talk to someone. Please contact: