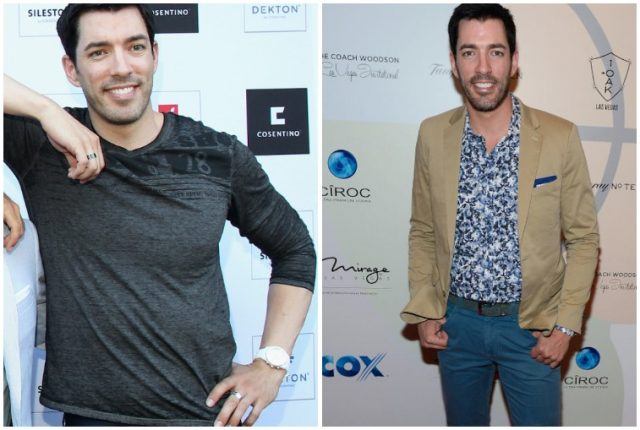 There’s no doubt about it — weight loss is tough. And while your busy schedule might not allow for the perfect diet and exercise routine, it seems celebrities have it easy. With their personal trainers and private chefs, it’s no wonder they all have picture-perfect bodies — right?

Here’s the thing: Even celebs struggle with their weight — and it’s only after countless hours of moving and grooving that they were able to shed stubborn fat. Here are the stars that lost serious pounds on Dancing with the Stars.

Let’s start with this season’s Property Brothers contestant. Us Weekly reports Drew Scott lost an impressive 30 pounds in just the first five weeks of the competition. As he told the publication, “I’m seeing my abs like I’ve never seen them before. I’m eating a lot more now, just because I need to keep that weight on.” Since starting Dancing with the Stars, Drew says he’s also dropped a pants size thanks to the cardio dancing provides.

Next: This actress lost over 30 pounds thanks to the rigorous routines.

Marie Osmond’s Season 5 run on DWTS took her right up to third place — and her effort really showed. Though we can’t forget the moment she collapsed on stage, we also can’t forget her significant weight loss. Today reports she lost at least 31 pounds, 5 inches off her waist, and 5 inches off her hips just from the show. And according to People, she lost even more weight after the finale thanks to a careful diet with Nutrisystem. It seems the diet and exercise combination really worked for her.

Next: We never knew this rockstar’s daughter could look this fit.

We remember Kelly from her appearances on her family’s show, The Osbournes. But through her years of yo-yo dieting, emotional eating, and addiction, her weight fluctuated greatly. Thanks to DWTS, Kelly Osbourne was able to put her health first — and she achieved incredible results. E! News reports she lost 42 pounds while on the show.

Next: This comedian never worked out before DWTS.

While plenty of celebs already have a diet and fitness routine in place, this was not the case for comedian Margaret Cho. At 41 years old, she told People the show was the first time she was really involved in fitness. Since she’s participated in DWTS, she says, “Now that I’ve been moving, I realize how good it feels.” Though she doesn’t track her weight loss with a scale, she says she noticed a dramatic difference in her face and whole body — and we certainly see it, too.

Next: This contestant said weight just “fell off” during the competition.

She may not have won her season, but this famous legal commentator certainly gave her all. Daily Mail Online reports in just eight weeks of competing on the show, she lost a whopping 25 pounds. And since Nancy is in her 50s, we know that’s no easy tasks.

So, how did she do it? She says she didn’t even have to try, as dancing for eight hours a day made her too exhausted to eat.

Next: This inventor looked better than ever after he competed on the show.

No one expected Steve Wozniak, inventor and computer programmer for Apple, to look as good as he did post-DWTS. Though he didn’t win Season 8 back in 2009, he lost a significant amount of weight in just the four weeks he competed. CBS News tells us he didn’t divulge just how much he lost, but even without the numbers, he looked better than ever.

Next: This famous actress and model was one of the first to garner attention for her weight loss.

You know this star from General Hospital, but after Season 2 of DWTS, we knew her as the contestant who attained the most svelte figure. Tia competed on the show just a few months after giving birth, so she had some leftover baby weight she wanted to lose. And once her time ended on the show, she had heads turning with her significant weight loss.

Tia says her weight melted off from the intensity of her training regimen. She also says every dance she did worked different muscles, so changing up her workout helped her body get into even better shape, People reports.

Next: This actress was already thin — and after DWTS, she looked even smaller.

This famous actress is well-known for her role as the psychic in 1973’s Live and Let Die, and though she’s now well into her 60s, she still looks fantastic. And her stint on DWTS back in 2007 certainly helped keep her figure lean and muscular. TV Guide says Jane lost a total of 20 pounds while on the show. “I was 128 before I started, which was heavy for me,” she said. “That’s a good seven or eight pounds heavier than I ever like to be. Now I’m 108.”

Next: She’s known for her soul music — and also for her extreme weight loss success.

You know her for “Midnight Train to Georgia” and her signature soulful voice. But now you may know her for losing a ton of weight during her season of DWTS. Us Weekly reports Gladys credits her pro partner and countless hours spent rehearsing for her 60-pound weight loss. She also used the Freshology meal delivery service and chose healthy, protein-packed snacks to help keep her on track.

Gladys didn’t win, but she vowed to keep her healthy lifestyle and continue dancing after the show.

Next: This Nutrisystem advocate and famous actress shed 100 pounds on the show.

This Cheers star has been known for her fluctuating weight for as long as we can remember. But back in 2011, Kirstie Alley turned heads with her incredible 100-pound weight loss on the show, NY Daily News reports. Since she made it all the way to second place on DWTS, she certainly had more time than other stars to whittle away her waistline. And Kirstie’s also a huge proponent for different diets, so healthy eating certainly helped.

Next: The 90210 actress lost several inches in just a few short weeks.

This 45-year-old actress and mom of three already looked great before hitting the dance floor — but the show toned her body even more. Jennie Garth appeared on Season 5 of DWTS and made it all the way to fourth place. PopSugar reports she lost at least 10 pounds and went from 29-inch jeans to 27s. She also said she was doing Pilates and cardio several times a week before the show began, but once she started dancing, it was the push her body needed to get into the best shape ever.

Next: This rapper looked amazing after her incredible weight loss.

Though we like to remember Lil’ Kim for her catchy rap tunes, a little bit of weight loss is always worth noting. CBS News reports she lost 20 pounds while on the show, bringing her down to a light 109 pounds. For someone only 4-foot-11, that amount of weight loss is significant.

Next: We never expected this talk show host to look this good.

Ricki did extremely well on Season 13 of DWTS, as she and her pro partner came in third place. And that’s not all she won from the show. Access Hollywood reports she also shed over 20 pounds and went from a size 8 to a size 4. She lost 15 inches overall. As she told the publication, “You sweat so quickly when you do this. I could run three miles on the treadmill and not really sweat but yeah, we do [in rehearsals].”

Next: This curvy model got her old figure back thanks to DWTS.

This model (and perhaps more famously, Kanye West’s ex-girlfriend) lost weight extremely quickly while on Season 23. Though she was eliminated fifth, Amber said she lost up to 10 pounds just within the first few weeks of performing on the show, Mirror Online says. As she said on her podcast, “I feel like I’m getting super toned.” Since she reportedly practices with her partner up to five hours a day, we certainly can see why.

Next: This Disney Channel star lost weight very quickly on the show.

This 19-year-old Disney Channel star said it best when he told People, “It’s crazy to think you’re going to come into a competition like this and not lose weight with the hours you’re going to have to put in.” And Kyle Massey was right. When he competed on Season 11, he lost at least 8 inches off his waistline and nearly 20 pounds. His diet left something to be desired, though, as he allegedly still indulged in unhealthy portions of pizza.