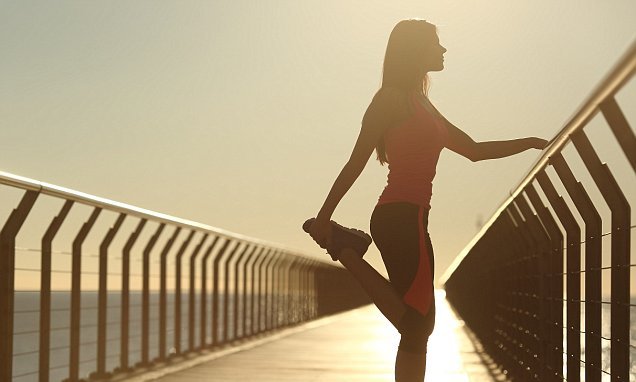 Exercise may be just as crucial to the well-being of people with depression as finding effective medication, suggests new research.

A new study involving more than 17,000 participants found that those with high fitness in middle age were significantly less likely to die from heart disease in later life – even if they were diagnosed with depression.

The research highlights several ways in which depression may ultimately impact health and mortality.

Heart health and depression often go hand-in-hand and depression has been linked to higher probabilities that someone will develop heart disease and chest pain.

The University of Texas scientists suggest that starting to exercise early in life and continuing to do it often could protect both the mental and physical health of patients battling depression and facing heart disease risks. 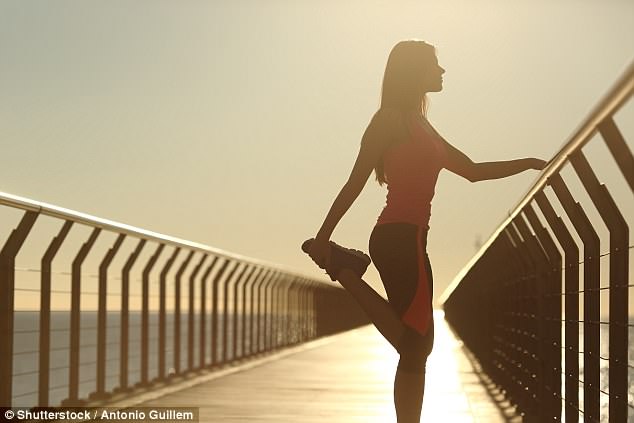 Taking up a daily run could lower heart disease risks by as much as 56 percent, according to new research, and working out could be particularly good medicine for those with depression

It also highlights the importance of overcoming a common dilemma among patients: how to cope with hopelessness and still find motivation to exercise.

Study co-author Dr Madhukar Trivedi, of the University of Texas, Southwestern, said: ‘Maintaining a healthy dose of exercise is difficult, but it can be done.

He said previous research shows that depressed patients can often perform about three-quarters of the exercise they’re asked to do.

He recommends patients take several steps to boost their chances of success, including setting aside a consistent time to exercise every day, but do not get discouraged by stretches of inactivity.

The study, published in the Journal of the American Medical Association Psychiatry, used a database of participants who had their cardio-respiratory fitness measured at an average age of 50.

Researchers used Medicare administrative data to establish correlations between the participants’ fitness at midlife to rates of depression and heart disease in older age.

Dr Trivedi says the findings are just as relevant to younger age groups, in particular university-age young adults who are just entering the workforce.

He said: ‘This is the age where we typically see physical activity drop off because they’re not involved in school activities and sports.

‘The earlier you maintain fitness, the better chance of preventing depression, which in the long run will help lower the risk of heart disease.’

Depression has been linked to several other chronic medical conditions including diabetes, obesity, and chronic kidney disease, which studies show can affect whether antidepressants are likely to help.

MINIMUM PHYSICAL ACTIVITY RECOMMENDATIONS IN THE US

Published in 2008, the US government’s Physical Activity Guidelines provide a baseline for how often, how long, and how hard people of various ages should work out.

Children and adolescents between six and 17 need an hour a day of activity.

For adults over 18, any activity is better than no activity.

‘Moderate-intensity’ workouts are less taxing, but take longer, and ‘vigorous’ ones are quick, but challenging.

For patients with these conditions, Dr Trivedi said the more appropriate treatment may be exercise.

He says the reasons behind this may partly be connected to the general health effects of physical activity, including the fact that exercise decreases inflammation that may cause depression.

By reducing inflammation, he said the risk for depression and heart disease are lowered.

Heart disease remains the leading cause of death in the US, and some 525,000 people have a first heart attack each year.

Even among those with heart disease, people who are inactive are more likely to die early, while exercising a few times a week may help to lower blood pressure and cholesterol levels.

In some cases, exercising regularly could even get some patients around starting a prescription.

Dr Trivedi said: ‘There is value to not starting a medication if it’s not needed.

‘Being active and getting psychotherapy are sometimes the best prescription, especially in younger patients who don’t have severe depression.’

He has organized large studies to further solidify the cause and effect relationships among fitness, depression, and heart disease.

One example is RAD, Resilience in Adolescent Development, a 10-year study that will enroll 1,500 participants who are at risk to develop depression but have not done so.

The study’s primary aim is to examine whether personal factors such as lifestyle and biology influence a teenager’s ability to resist mood disorders.

But researchers will also document fitness levels and track whether depression and heart issues arise in later years.

Dr Trivedi added: ‘There is enough evidence to show that the effect of low fitness on depression and heart disease is real.

‘But further study is needed to establish the mechanism by which this effect happens.’

Study lead author Dr Benjamin Willis, of The Cooper Institute, said: ‘These new insights demonstrate the ongoing importance of fitness throughout the lifespan.

‘Now we know that the long-term benefits, and the connection between mind-body wellness, are more significant than we thought.’

He added: ‘We hope our study will highlight the role of fitness and physical activity in early prevention efforts by physicians in promoting healthy ageing.’