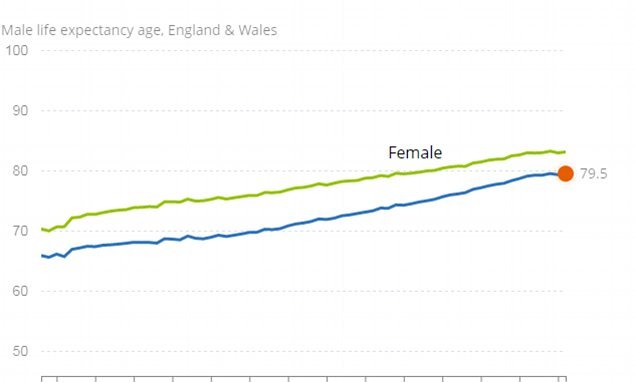 How much longer will babies born today live compared to 70 years ago? Official data reveals the huge shift in life expectancy and infant deaths since the NHS was launched

It’s set to celebrate its 70th birthday on Thursday.

But a lot has changed in the NHS in those seven decades, including monumental improvements in life expectancy and infant deaths.

Considered Britain’s most-loved institution, it has also been credited with keeping people alive for longer.

However, just how much improvement has there been since then Health Minister Aneurin Bevan created the NHS in 1948?

The Office for National Statistics yesterday released four graphs that show just how much has changed for different criteria, including life expectancy.

Users can also estimate the trend across the past 70 years for each set of data, by holding and dragging a line across the graph.

Since the NHS was created in 1948, there has been a stark improvement in the life expectancies of both men and women.

Boys born in 2016, the last year that data is available for, can expect to live until they are 79, while girls can expect to reach 83.

This has improved since the turn of the millennium, when life expectancies for baby boys and girls were 75 and 79 respectively.

Back then, boys would die before their 66th birthday on average, while girls would expect to be able to celebrate their 70th.

HOW MANY BABIES ARE BORN EACH YEAR?

According to the ONS, more than 48 million babies have been born in England and Wales since 1948.

On average, that equates to around 695,000 each year – but the overall trend hasn’t remained consistent over the past 70 years.

And during the time between, there has been a number of jumps and drops in the overall number of babies born.

For example, there is a huge drop in the number of live births after 1968, when the Abortion Act came into place.

The trend continued to sharply decline during the early 1970s, when contraception became free on the NHS to all women. It was first made available to married women in 1961.

However, it rose again towards the end of the decade and kept gradually increasing during the 1980s, before decreasing again in the 1990s.

HOW MUCH HAVE INFANT MORTALITY RATES CHANGED?

ONS figures show infant mortality rates reached a record low in 2016, with just 2,711 dying before they turned one.

In contrast, such rates were nearly 10 times higher in 1948, when 26,766 infants died across England and Wales before their first birthday.

The rates have been on a gradual decline across the 70 years, with vaccinations for measles and polio considered instrumental in helping.

HOW MUCH HAS THE POPULATION AGED 65 AND OVER CHANGED?

An ageing population has repeatedly been blamed by experts for a surge in demand on the over-stretched NHS.

And the boss of the health service, Simon Stevens, said just days ago the growing elderly population was among one of its biggest challenges in history.

Figures show there were around 11.5 million adults over the age of 65 living in Britain in 2016 – around 18 per cent of the population.

In contrast, there was roughly six million back in 1948 – the equivalent of 11 per cent of the total population.

The rate has steadily increased since the first year of the NHS, but has shot up since 2010, according to the ONS data.