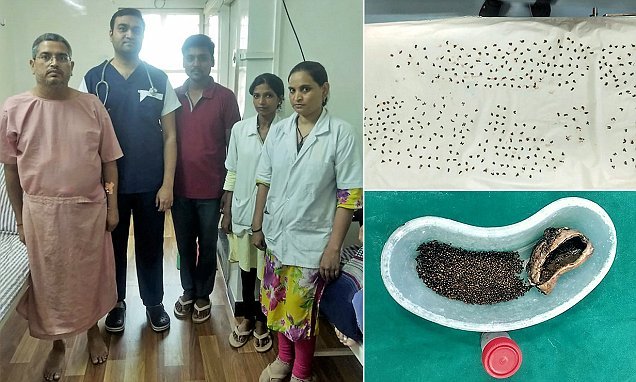 Man with 4,100 gallstones suffered agonising abdominal pain for years until surgeons removed them

A man who suffered from agonising abdominal pain for years was cured after surgeons removed a staggering 4,100 gallstones from his body.

The stones, which measured between 2mm and 4mm, took two-and-a-half hours for surgeons to remove from Yogesh Yeole’s gallbladder.

Dr Amit Sharad Kele, who carried out the procedure at Krishna Hospital in Nashik, India, on Saturday, said: ‘Usually we get to see two-to-20 stones, but here there were so many and when we counted them, it was a whopping 4,100.’

Mr Yeole, who is thought to have had his gallbladder taken out, is believed to have made a full recovery.

It is unclear what led to Mr Yeole’s gallstones, however, they are usually caused by an imbalance in the production of bile, which is produced by the liver to aid digestion. Despite expecting just 20, surgeons counted out a ‘whooping’ 4,100 gallstones

Dr Sharad Kele added: ‘Yeole, the owner of a hardware shop, had no significant previous medical history [and] came to me with severe abdominal pain on May 25.

‘We carried out [a] sonography, CT scan, liver function test and a test to find out whether there was any inflammation of the pancreas.

‘The sonography showed that a single mass was occupying the entire gallbladder, as in sonography it is difficult to distinguish between the small stones.

‘Whereas the CT scan report showed cholecystitis, which is inflammation of the gallbladder.

He said: ‘However, the CT scan did not show any gallstones because they are radiolucent which means they are entirely transparent to radiation and almost entirely invisible in X-ray photographs.

‘We went ahead and did an emergency surgery on May 26 and were surprised to find multiple stones.’ It is unclear what led to Mr Yeole’s gallstones, but they are usually related to bile production

Gallstones are lumps of sold material that form in the gallbladder.

In the UK, up to one in 10 adults have the condition. It affects around 15 per cent of people in the US.

Gallstones can resemble grains of sand or large pebbles.

They are formed from chemicals in bile and can consist of just cholesterol, a mixture of calcium and a pigment from red blood cells, or a combination of the two.

Gallstones have been linked to high-cholesterol diets, as well as liver damage and fasting.

Most people are unaware they have gallstones.

The most common symptom is abdominal pain, which can last up to eight hours and be severe.

This may be mistaken for a heart attack.

Pain occurs due to the gallbladder trying to expel the stones.

If gallstones have been discovered via a scan for something else and are not causing symptoms, they are often left without treatment.

Gallbladder inflammation may require antibiotics to be administered in hospital.

Severe symptoms may lead to people having the organ removed.

The gallbladder, which is involved in digestion, is not essential for life.