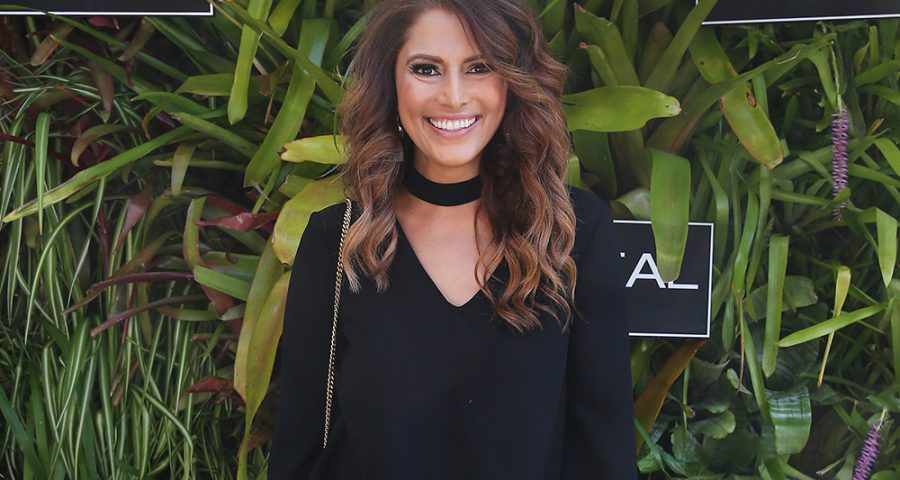 TV personality Sally Obermeder and her husband Marcus Obermeder’s lives were changed forever when they heard the news that Sally had breast cancer. She was diagnosed 41 weeks into her pregnancy.

Honestly I think he takes great pleasure in ruining my selfies ??????? possibly my punishment for taking 400 "options" ??

Sally has spoken openly in the past about her breast cancer journey, however Marcus has remained private about it, as he does with most of their private life.

He recently shared his experience of supporting Sally through her breast cancer diagnosis and journey to recovery in an interview with Mamamia, which was as part of the National Breast Cancer Foundation’s Real Men Wear Pink campaign.

The campaign is aiming to create awareness of the impact that breast cancer diagnosis can have on men who know the patients, and also to make men aware that they can be diagnosed with breast cancer too. However, the cases are heavily skewed towards women – according to Cancer Australia, in 2017 there will be an estimated 17,568 female cases of breast cancer in Australia, compared to 144 male cases.

Marcus described that first moment of knowing the doctors had found evidence of breast cancer as shattering.

“My heart sank but at the same time adrenaline kicked in as I knew our lives had just changed forever and that would need to be there for Sally and our unborn baby,” he said.

“The future looked very uncertain and this really shook me to the core but I had to stay strong and step up.”

well this just about sums up our romantic anniversary weekend ?? and there's no other way we'd have it ❤️❤️happy 16 years babe ❤️❤️

Sally had to go through chemotherapy just ten days after she left the hospital to give birth to their first child, Annabelle. Marcus said that he and Sally had emotionally prepared themselves for the worst case scenario.

“Realistically, we both thought Sally was going to die and prepared for the worst. This is something very difficult to deal with both at a practical and emotional level,” Marcus said.

“But it brought us closer to our true selves and each other. Death is like a mirror that reflects back to you the truth about who you really are. A friend told me to get my financial affairs in order which I thought was good advice as it meant that we could then just focus on each other.”

He said that when she was going through chemotherapy, it brought the them closer together as they had to talk about thoughts and emotions that were deeper than ever before. They spent a lot of time together and worked as a team to make sure that Annabelle was getting the love and attention that she needed too.

the way social media can connect us never fails to amaze me. i was up doing a middle of the night feed and as i often do to help me stay awake, i was scrolling through instagram. minutes later i got an email from the amazing Anne Geddes who was in NY and who i haven’t seen in a few years. It was so good to immediately pick up where we left off – Anne: ”how’s Annabelle” … “what’s she like” …”how’s she finding school” Me: how’s New York” … ”I’m sooo jealous” hahaha i was lucky enough to have Anne take a picture of Annabelle and I, when Annabelle was about 3 months old. I was so sick and struggling under the trauma of chemo but Anne and her team made us feel totally enveloped in love and for a brief moment i forgot i was sick. Anne wrapped Annabelle and i up in this really fine gold thread and i held Annabelle really close and she captured the love, but also the sadness in my eyes. For a long time i only saw the sadness, but a few months ago when we moved and i packed it up i looked at it somehow with fresh eyes and all i could see was us in a tight bond inside the web that life had spun for us. So as i sit here, feeding and reminiscing, I look back with gratitude for the experience and for putting someone as kind, compassionate and as incredible as Anne in my path. If you can be an Anne to someone who needs it, do it. The world needs more Anne’s. ❤️❤️To my love, Sarah who arranged for this Anne gift, i have never forgotten.

Finally, after chemotherapy, two mastectomies and reconstructive surgery, Sally was found free of cancer in 2012. Now they have two children – Annabelle who is now five years old, and Elyssa, who they recently welcomed through surrogacy.

“Through Sally’s journey we learnt that life is short at best so you really want to be sure about how to spend the limited time you have and with whom. To us family is most important and we really appreciated the quality time we were able to spend together during this ordeal,” Marcus said.

“It also made us realise the simple things in life matter most. We picture a future where we are old, strolling happily down the street holding hands, whilst enjoying an ice cream together.

“We reflect on life, family, kids and grandkids and appreciate the chance we had to know love in its many forms. And we are filled with a universal gratitude that leaves us deeply and eternally satisfied.”

This article originally appeared on InStyle.