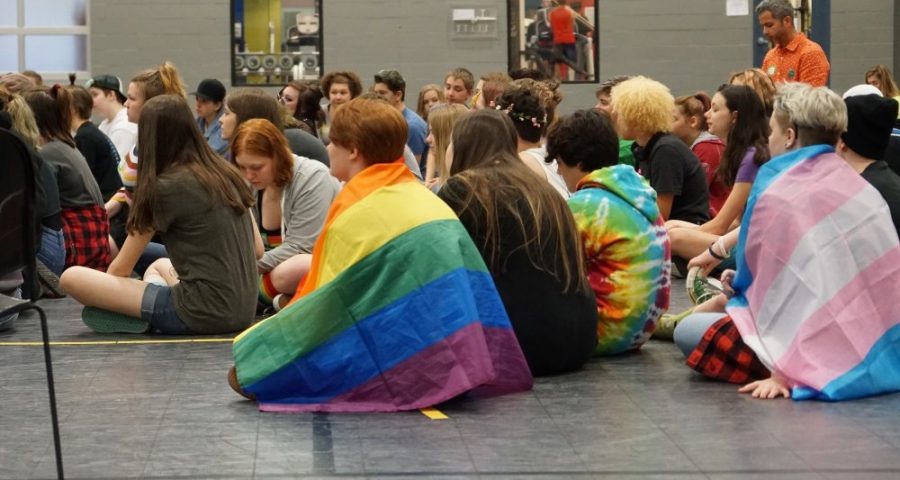 A new report from University of Oregon researchers shows bias-based bullying and violence is on the rise in Oregon schools, especially aimed at LGBT students, who experience twice as much verbal, physical, psychological and sexual violence as their peers.

The “State of Safe Schools Report,” a collaboration between UO researchers and the Oregon Safe Schools and Communities Coalition, analyzed survey results from 600 schools and 27,000 students to assess school safety and student well-being in Oregon. The report indicates that LGBT youths face unsafe conditions at school due to high rates of bullying, violence, sexual assault and suicide ideation. Those students also report higher rates of fear-based absences from school and mental health risks.

“In 2017, bias-based bullying, violent harassment, sexual assault and fear-based absences were at alarming rates among our LGBT youth,” said Julie Heffernan, graduate director of teaching and licensure at UO’s College of Education and co-chair of the Oregon Safe Schools and Communities Coalition. “We’ve known these are issues for a long time, but this is the first time we’ve had Oregon data that highlights just how bad conditions can be in our schools.”

The primary reason the data has not existed until now is because most surveys don’t include enough questions to capture a complete picture of student gender identity and sexual orientation. To address that deficiency, Heffernan and colleagues from across the state crafted new language for the Oregon Health Authority to use in its biannual Oregon Healthy Teens Survey.

That change allows the agency to collect deeper demographic data and gain a better understanding of students’ learning environments and communities. The 2017 survey was the first time the new language was utilized.

“This survey gave us rich information about school climates,” Heffernan said. “We’re now compiling some of the best data in the country for school safety related to gender identity and sexual orientation. And that data confirms that there is an immediate imperative to address school climate for LGBT youth in Oregon.”

One of the data points Heffernan points to as among the most urgent and troubling is the number of youths who were threatened with a weapon at school, which was 1 in 5 among transgender youth and 1 in 10 LGBT students. Another is the rise in suicide ideation and suicide attempts among all youth, with one-fifth of Oregon youth considering suicide in 2017, including close to half of Oregon youths identifying as transgender and just under half of LGBT students.

Some relevant data was getting captured prior to the new survey results, but Heffernan said it was primarily on the crisis end of the issues. She hopes the recent survey results will help localize the problems and spur policymakers and school administrators to implement new practices and support services that will help address underlying issues and improve the learning environment and safety for all students.

“The focus on the well-being of LGBT youth has impacts for all young people,” Heffernan said. “The treatment of LGBT youth in schools is one clear hot spot impacting the overall climate in our schools, but past research has shown that when Oregon schools and communities are inclusive of LGBT diversity, there are mental health improvements for all students as well as a decline in school bullying and violence directed at all students.”

The report includes a number of policy recommendations to improve school climates and adolescent well-being. These recommendations include administrative oversight for anti-bullying policies, inclusive curriculum, trauma-informed classrooms, educator training and student support through groups like gay-straight alliances, which help underrepresented students connect with others from their communities.

One of Heffernan’s top recommendations for educators is to focus on community-based outreach to raise awareness and address bias-based bullying. Locally, the College of Education is implementing those practices in Lane County through a number of different events and programs.

They include an LGBT inclusive Pink Prom, which was attended by 200 students from 12 regional high schools this spring, and an annual TeachOUT youth leadership summit that hosts hundreds of students from 29 different schools to promote confidence and expression in education.

“We need to create inclusive spaces for these students that build community and provide positive narratives for LGBT youth,” Heffernan said.

A Duckfunder crowdsourcing campaign is underway to help support the youth leadership summits for regional LGBT middle and high school students and their allies. The campaign hopes to raise $8,000 to help pay expenses.

Heffernan and other UO faculty and students are also involved in advocating for inclusive literature in the Oregon Battle of the Books, which has faced pressure in some schools to ban or drop a book about a transgender child from its 2018-19 reading list.

“Unfortunately, this kind of silencing of a minority group is not unusual in our country right now, which may be associated with a rise in bias-based bullying and unsafe conditions for our LGBT youth,” said Heffernan. “The findings and recommendations included in this report are urgent, given our current political climate where we’re seeing many public challenges to civil rights and troubling examples of bullying and violence aimed at marginalized communities.”

Some key findings from the State of Safe Schools Report are: