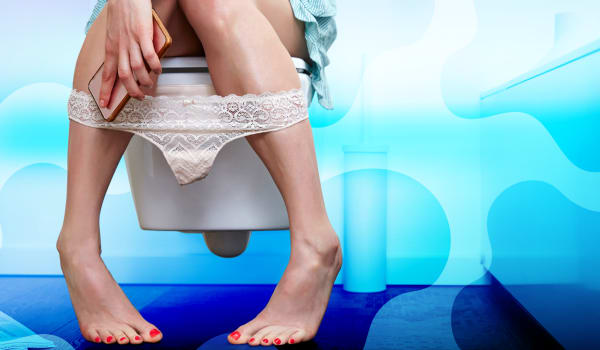 During pregnancy, women often have mild urinary incontinence. In fact, more than one-third of women experience temporary stress incontinence during their first pregnancy. But what about after giving birth? We chatted with nine moms about their experiences with bladder leaks post-childbirth. Here’s what they had to say.

“The first thing I think about with bladder leakage after childbirth is like having to cross your legs every time you sneeze and cough, and totally forget about ever doing a jumping jack in your life.” —Anne Carter

“Anything to do with jumping. And you have to wear a panty liner — forget jumping on a trampoline ever!” —Vickie West

“Even if I don’t have to pee I still cross my legs if I cough or sneeze. It’s a habit.” —Ashlee Baxtor

“For a time after I had the baby and even still occasionally when I look at a toilet, I have an overwhelming urge to pee and sometimes can barely contain myself.” —Katie Liewehr

“I never experienced bladder leakage after birth and my kids were huge, about 10 pounds.” —Mathilda Pienton

“After giving birth it felt like I had no control over my bladder for the first few weeks. I would pee a little when I laughed, when I sneezed, when I sat down, when I stood up, when I breathed. It was the worst. Super thankful everything is back to normal now!” —Tess Guanzon

“I never had any bladder leakage, but I did have increased urgency.” —Cynthia Grazian

“So obviously, I had times where I leaked toward the end of pregnancy, but now it’s anytime I sneeze or laugh too hard, a little bit sneaks out. It’s annoying, but I know I should do more kegels.” —Tricia Conohan

“I actually had my son at 28 weeks, and while pregnant with him, I only had issues once. But after him, every time I sneeze a little comes out. If I have to go, I can’t wait or I end up peeing my pants because my muscles are so weak. I’ve tried kegels, but they never work. And I’m also 5 months pregnant now, so that isn’t helping either! I actually wet myself at work yesterday after sneezing.” —Sheyanne Vasquez