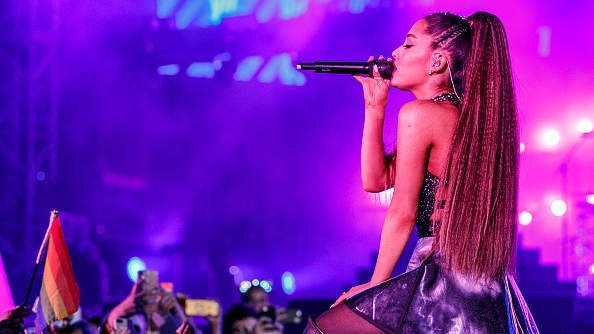 A year after a suicide bombing killed 22 people at an Ariana Grande concert in Manchester, England, the singer says she’s still suffering from post-traumatic stress disorder (PTSD). Grande recently discussed her experiences with stress and anxiety in British Vogue, saying that “time is the biggest thing.”

On May 22, the one-year anniversary of the bombing, Grande tweeted a message of love to her fans “on this challenging day.”

The pop star also told British Vogue that her own feelings are hard to talk about, because so many others lost loved ones or suffered severe injuries in the attack. “I feel like I shouldn’t even be talking about my own experience,” she said, “like I shouldn’t even say anything.”

“But yeah, it’s a real thing,” she added. “I know those families and my fans, and everyone there experienced a tremendous amount of it as well. … I don’t think I’ll ever know how to talk about it and not cry.”

Grande’s admission touches on an important point about mental health: Just because a person don’t have lasting physical damage from a traumatic experience—and just because he or she didn’t suffer as much as someone else may have—doesn’t mean that its emotional toll should be any less real. Here’s what we know about PTSD, and how to help someone who’s struggling.

Symptoms of PTSD used to be described as “shell shock” or “battle fatigue” in veterans coming home from wars. Now, the American Psychiatric Association says that about 1 in 11 people will experience PTSD in their lifetime, which can be triggered by any type of physically or emotionally traumatic event.

Not everyone who experiences trauma will develop PTSD, and it’s not always clear why some people are affected more deeply than others. Soldiers at war are still frequent victims of PTSD, but the disorder can also happen to survivors of sexual assault, natural disasters, motor vehicle accidents, and, yes, terrorist attacks. For some people, even just learning about violence or tragedy that happened to someone else can trigger PTSD symptoms.

Anxiety—which Grande told British Vogue she’s always struggled with—is a big part of PTSD. “My anxiety has anxiety,” she told the magazine. “When I got home from tour [in September] it was the most severe I think it’s ever been,” she added.

But PTSD can also involve depression, negative thoughts, and changes in behavior. When these symptoms last only a few weeks after a traumatic experience, it’s known as acute stress disorder. Symptoms lasting longer than a month, however, are generally considered PTSD and should be evaluated by a mental health professional.

What are the symptoms of PTSD?

People with PTSD often experience flashbacks and vivid, intrusive memories of the traumatic event they suffered through. These flashbacks are often triggered by sights, smells, or sounds (like a car backfiring)—or by the mention of a similar event happening elsewhere—but they can also come out of nowhere.

“Those [triggers] go to the deep part of your brain,” Elspeth Cameron Ritchie, MD, a retired military psychiatrist, previously told Health. “Your instincts take over.”

PTSD can also prompt panic attacks, and victims may startle easily because their body’s fight-or-flight response is constantly working in overdrive. They can also experience nightmares and trouble sleeping, and frequently suffer from depression, irritability, and feelings of guilt or shame.

“Because of what they saw or what they did, or [because] they couldn’t save the day, they feel a lot of guilt,” Sonya Norman, PhD, psychiatry professor at the University of California San Diego, previously told Health. “It’s very common to overestimate how much control they had and blame themselves.”

How is PTSD treated—and when does it go away?

People with PTSD should never be criticized for being too sensitive or for not being able to “get over it” in a timely manner. “People seem to think that there’s a timeline and there isn’t,” says Lea Grover, a rape survivor who was interviewed by Health last year. “There is no universal timeline for when triggers get easier to deal with.”

Once a person is diagnosed with PTSD, a mental health professional can help design a treatment plan that may include antidepressants, anti-anxiety medication, counseling, and/or behavioral therapy. One of the most common treatments, known as cognitive processing therapy (CPT), focuses on helping patients recognize and stop upsetting thoughts as they happen.

It’s important that people with PTSD don’t suffer in silence, says Ian Kerner, PhD, a psychotherapist in New York City, since treatment can greatly increase their chances of recovering and moving past their trauma.

“These therapies can be incredibly healing, and they’re not necessarily long-term psychoanalytic treatment, either,” he told Health last year. “It can often be short- to medium-term processing just to help you work through it all.”