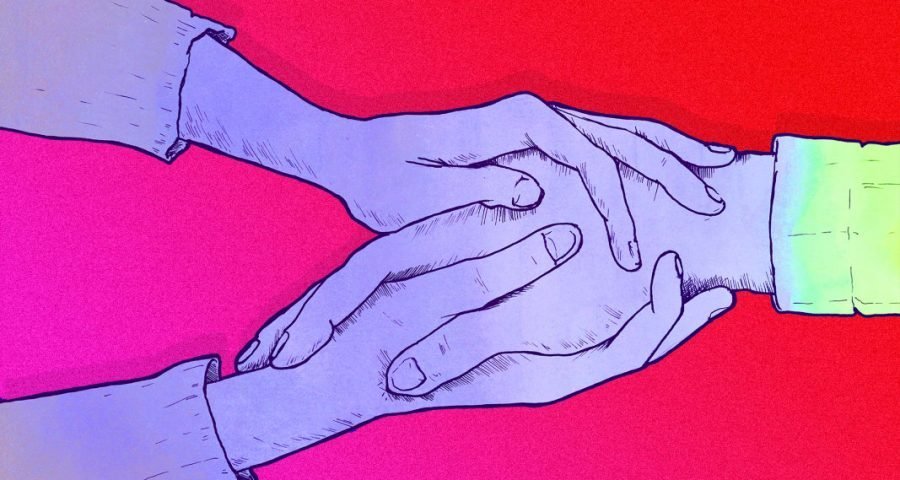 I still remember when my Dad and I spoke about my eating disorder recovery together in public for the first time: 4:30 p.m. on a muggy Fort Worth, Texas, afternoon. My parents and I were piling into what used to be the family car — the comfortable, familiar scent of Mom’s perfume lingering on the leather seats.

Once we were on the road, past the neighborhood streets and jerky exits of the forever-in-construction Texas highways — I piped up.

His eyebrow slightly rose. “Um, me?”

“You mean when you asked if I might speak two months ago and then never brought it up again?”

He glared through the rearview. “You’re joking, right?”

On this particular evening, we were on our way to my former treatment center so I could speak at their monthly alums event. The director of the treatment center had asked if my dad and I would be interested in speaking together. We had talked about it a bit — but much to both our surprise, it seems we’d never made an actual decision.

“What am I supposed to talk about, precious daughter?”

He reached back with his “parent arm” as I call it.

He was right. It was an asshole thing to do.

We spent the next 30 minutes of the drive discussing “eating disorder parent topics” to make sure he was prepared with some material before the event.

He was nervous, I noted, which surprised me because my father has never been of anxious character.

An hour later, we sat together in a room full of people: Dad up front in a chair beside me in the Renfrew treatment center cafeteria. Parents and patients staring in our direction — all of us hoping for something — some momentary shift in reality — that would alter the pain that either their spouse or child felt.

I told my story, my dad and I knee to knee — and when the time came, I handed the mic over to him and watched as he opened up to a roomful of strangers about his child’s anorexia. And how he didn’t see it.

His eloquence off-the-cuff was something I’d never seen before.

“We didn’t know,” he said. “And if I could give any advice to any parent, it’d be to please watch your kids. Their actions. Don’t assume that you know them as well as you think you do.”

I looked at him beside me.

“There’s been a lot of guilt my wife and I have felt over Lindsey,” he admitted, which I’d never heard before either. “And I know, of course, that we’re not maybe supposed to feel — or say — that, but we’re human. And for years, she was hurting, and we didn’t see.”

“It’s painful, really, to talk about it now to a roomful of strangers. I wonder, naturally, what you all think of us as parents. If you think we could’ve been better. If we had our heads up our butts.”

A parent in the back spoke up. “I feel the same. You’re not alone.”

He smiled, a bit sad. A bit hopeful. “We’re up here tonight — my wife and I — to show and remind other parents that we’re all only human. And as much as we love our kids, at the end of the day, all we can do is support them when they hurt. I sit with Lindsey now, as she makes her speeches and writes her blog — I’ll support her through it all so she never has to feel like she doesn’t have us to lean on when she needs that hand.”

He knocked his knee against mine. “She drives me crazy, but I love her. Unconditionally. And the woman she is becoming and has always been.”

That night, we both sat there — forever altered. Isn’t it funny when you think you’re the one who is to do the “changing” for people? That night, I’m not sure who I helped — or if I did.

But, I did know — as my dad folded his hands into his lap — that we helped each other.

Two months later, a documentary was filmed about my eating disorder.

My parents were none too comfortable with a camera crew in their house. Private by nature, it was a tense day of filming — intruding on their lives and mine.

They still did it.

They still chose to do it.

My dad and mom with microphones on — sitting in their living room, answering questions about me. Answering how they missed it, how they caught it and how it has forever altered their lives in both positive and maybe not-so-positive fashions.

Neither of them had to help me or even support my blog. Both of them have.

My dad and I, these days, we’re a team, and we now speak together frequently. I talk to the young men and women. He speaks to the parents. If he has a friend who has a kid with a suspected eating disorder, he sends that dad to me to talk. Dad asks me questions now about anorexia. We communicate directly about the sickness instead of sidestepping.

My dad — my parents both — are in the audience for speeches as I’m standing there telling hundreds of people about the time I threw up cereal or got arrested on an empty stomach for drinking and driving.

They support. They love in the way only they know how. And on this Father’s Day, I can never thank my dad enough for his beautiful, unconditional support — as we continue to talk to others and learn what it means to be transparent and free.