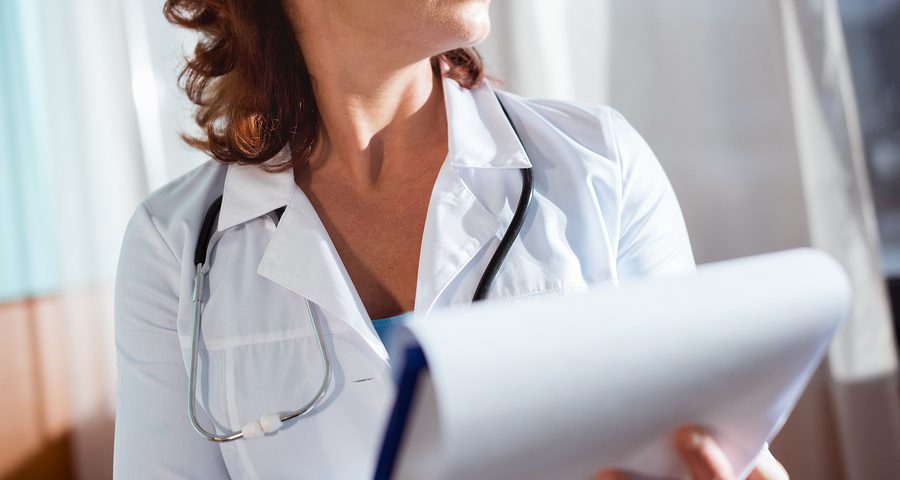 The anecdotes are legion. One time when Abby Carter (not her real name) had to get her gallbladder out, her doctor told her that he made her surgeon wait an extra day even though she hadn’t eaten anything that day. The doctor wanted her to know what it felt like to be hungry and said her gallbladder had to be removed because of her weight.

When Carter spoke with her surgeon, she was upset and defensive and said, “I know I did this to myself because I am fat.” The surgeon told her that in fact the size of the stone indicated that since she was born, her gallbladder had never worked properly. She was 18.“disrespectful treatment and medical fat shaming, in an attempt to motivate people to change their behavior, is stressful and can cause patients to delay health care seeking or avoid interacting with providers.” – Joan Chrisler, Ph.D and Angela Barney

Carter dreads going to the doctor because of these negative experiences. She once went two years without seeing a doctor, and the last time she went, her mom offered to come because she was so terrified.

Unfortunately, Carter’s experience isn’t unusual. Fat shaming at the doctor’s office is a thing, and it’s not okay. Joan Chrisler, Ph.D., professor of psychology at Connecticut College, found that sizeism and stereotypes of fat people can have a negative impact on their physical health and well-being. In an article entitled “Sizeism is a health hazard,” that she co-wrote with Angela Barney and presented at a recent convention of the American Psychological Association, Chrisler says that “disrespectful treatment and medical fat shaming, in an attempt to motivate people to change their behavior, is stressful and can cause patients to delay health care seeking or avoid interacting with providers.”

Sizeism can have an effect on how healthcare providers medically treat patients, according to Chrisler, as overweight people are often excluded from medical research based on assumptions about their health status. The standard dosage for drugs may not be appropriate for larger body sizes, for example, and recent studies have shown frequent under-dosing of overweight patients who were prescribed antibiotics and chemotherapy.In one study of over 300 autopsy reports, obese patients were 1.65 times more likely than others to have significant undiagnosed medical conditions, indicating misdiagnosis or inadequate access to health care.

In one study of over 300 autopsy reports, obese patients were 1.65 times more likely than others to have significant undiagnosed medical conditions, indicating misdiagnosis or inadequate access to health care.

It makes sense, then, that a provider’s negative attitude can cause psychological stress in patients. “Implicit attitudes might be experienced by patients as microaggressions – for example, a provider’s apparent reluctance to touch a fat patient, or a headshake, wince, or ‘tsk’ while noting the patient’s weight in the chart,” says Chrisler. Over time, this only gets more stressful and adds to the fat stigma.

“No research has been able to show how much weight is too much,” says Chrisler. Other predictors of illness also play a role, yet it’s assumed that someone is unhealthy if they’re fat. Additionally, fat shaming on social media has become all too common, and weight is the most common reason children are bullied in school. The number of surveyed adolescents who saw overweight classmates get teased in gym class is a shocking 85 percent.

Stories from all ages

Gabby Stone (not her real name) says she used to avoid going to the doctor because weight was always the first thing mentioned. Since it’s always been a challenge for her, she’s hypersensitive to it. Because she’s ashamed of her weight, these appointments always made her feel even worse. Over ten years ago, she went to a female doctor who always focused on her weight despite her terrible back pain. Even though Gabby knew that losing weight would probably help her back, the doctor never looked beyond that. “I thought going to a woman would give me someone more understanding, but I was wrong,” she says.

Turns out, Stone has a legitimate back problem with a broken spot in her lower back and two discs rubbing together. Any doctor she’s tried to talk to about this just focuses on the weight.

Katie Roemele remembers when she was under 10 years old, her female pediatrician consistently fat shamed her. “She would tell me that I already weighed more than her adult male children and that I was more or less failing at life,” Roemele remembers. “She then went on to misdiagnose spinal meningitis when I was in second grade, and severe pneumonia when I was a preteen, both instances of which landed me in the hospital in a much worse condition than I would have been if she’d taken care of the issue when I was initially examined by her.”

The point of Chrisler’s article, she says, is that patients of all body sizes and shapes should be treated respectfully. “They should be educated about healthy behavior, not shamed for their weight – also doctors should not assume that fat patients have a poor diet and are sedentary,” she adds. It’s much easier to gain weight than to lose it, she points out.“Essentially, treat me like a human and do your job the way you would expect someone to do it to you, your parents, or your child.” – Carter

“Fat shaming and discriminatory treatment is unethical,” says Chrisler, who recommends that doctors and patients familiarize themselves with the Health at Every Size model, which places the focus on behavior, not weight. We could all have a more nutritious diet and be more active, and benefit from those, whatever our weight.

“One thing doctors can do is to ask questions rather than make assumptions,” Chrisler says. “Patients can change doctors if they experience shaming; that is obviously better than avoiding needed health care and screenings.”

Healthcare providers clearly need better education – both in medical school and in continuing education programs. They can take the Implicit Association Test (weight version) to find out if they have an unconscious bias. “The first step in changing one’s attitudes is knowing what they are,” says Chrisler.

Stone recommends advocating for yourself, and for providers to listen to their patients. Carter is fine if a doctor wants to address her weight, as it’s high and a valid health concern, but says the provider needs to be professional and treat people with dignity and respect. “Essentially, treat me like a human and do your job the way you would expect someone to do it to you, your parents, or your child.”