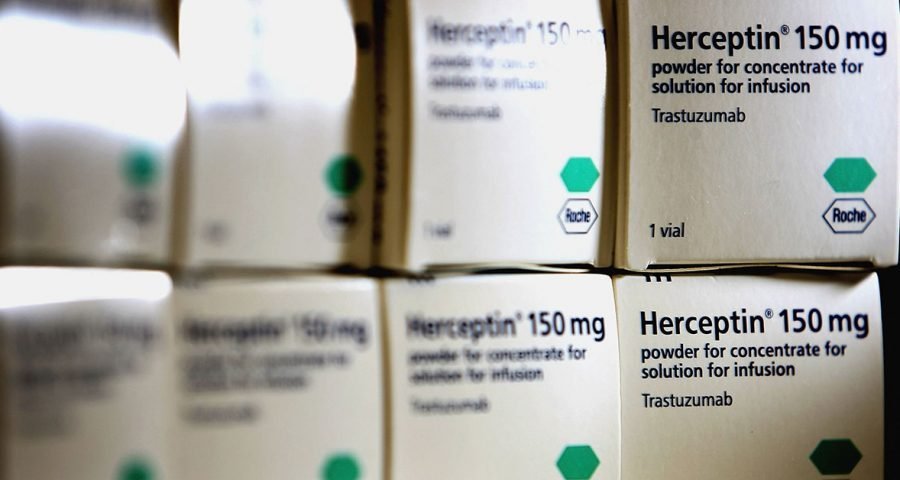 Researchers say six months of Herceptin treatment for early stage breast cancer may be as effective as taking the drug for an entire year. 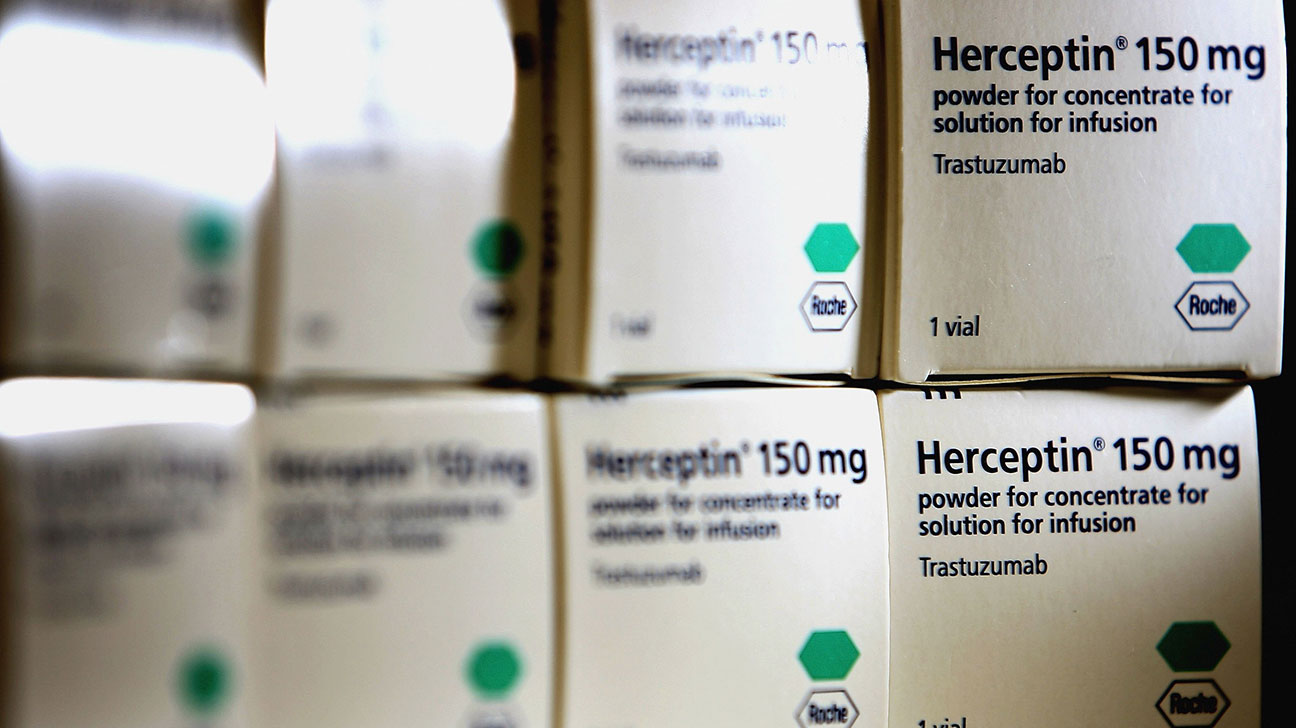 Some women with breast cancer may be able to cut Herceptin treatment in half.

Researchers overseeing a phase III randomized clinical trial have concluded that six months of treatment is “non-inferior” to the standard 12 months of Herceptin use.

Herceptin, the brand name for trastuzumab, is used to treat all stages of HER2-positive breast cancer. But this trial focused on early stage disease.

The women also received chemotherapy during the trial.

Half the study participants took Herceptin for six months.

For this group, the disease-free survival rate at four years was 89 percent. Four percent stopped taking the drug early due to heart problems.

Half the women received Herceptin therapy for 12 months.

Disease-free survival in this group was also 89 percent at four years. Eight percent had to stop early.

Led by the University of Cambridge in the United Kingdom, this trial was the largest yet to study the impact of shorter treatment with Herceptin.

The researchers are still analyzing the results.

They want to learn more about how shorter treatment could impact quality of life. They’re also working on a cost-effectiveness analysis.

The study, named Persephone, isn’t yet published in a peer-review journal.

Findings will be presented Monday at the 2018 American Society of Clinical Oncology Annual Conference in Chicago.

How Herceptin is used

Herceptin is what’s known as a targeted therapy.

The drug attaches to the receptors and stops cancer cells from growing and dividing.

About 25 percent of breast cancers are HER2-positive.

Dr. Dennis Citrin is a medical oncologist at Cancer Treatment Centers of America (CTCA) in Chicago.

According to Citrin, most patients with HER2-positive breast cancer are good candidates for this treatment.

The only exceptions are those who have severe heart disease or are allergic to the drug.

“The drug has to be given intravenously for a whole year. The first infusion we give slowly over 90 minutes. If there’s no allergic reaction, then subsequent infusions are given over 30 minutes, commonly every three weeks,” Citrin said.

He notes that Herceptin is used as adjuvant therapy. In early stage breast cancer, it’s normally given for 12 months following surgery.

“Of course, this most recent study is bringing that into question,” he said.

Other cancer treatments, such as chemotherapy and hormone therapy, cause side effects that can sometimes become intolerable.

Herceptin also has some potential side effects, such as headache and nausea.

But Citrin, who sees breast cancer patients exclusively, finds that most women tolerate the drug well.

“There’s a risk of heart muscle damage. But unlike chemotherapies like Adriamycin, the damage can be reversed in almost all cases. We monitor, and if there’s a drop in heart function, we stop the medication,” he explained.

“As a foreign protein, it can cause an allergic reaction. But we pretreat with antihistamine to reduce that possibility. Because it’s a biological agent, patients may have fever post-infusion. We give a small dose of Tylenol to prevent that,” Citrin said.

“Other than that, there aren’t any major side effects like there are with chemotherapy,” he said.

Dr. Kimberly Allison is a fellow at the College of American Pathologists in California. She received a diagnosis of stage 3 locally advanced breast cancer in 2008.

She told Healthline that she completed 11 months of Herceptin treatments. She described it as easy to take and had no troubling side effects.

But her last treatment was canceled when cardiac evaluation indicated an arrhythmia.

The impact of shorter treatment time

Because earlier trials involved 12 months of therapy, that’s been the standard of treatment.

Dr. Mariana Chavez-MacGregor is an associate professor in the department of breast medical oncology and department of health services research at the University of Texas MD Anderson Cancer Center.

She told Healthline that cutting treatment by half would make a big difference to patients.

“It’s six months less of not coming in to get regular infusions and heart tests. In addition to the cost of the drug, you have the costs of the infusion, the facility, the nurses, taking a half day off work, etc. All that can be overwhelming,” she said.

Allison addressed the emotional aspects of treatment as well.

“When you finish chemo, you’re sent out into the world again and expected to continue on. Mentally, in some ways, it was nice to continue treatment with Herceptin. As a patient, I felt like I was still doing something, still actively fighting. It was a nice way to taper off,” she said.

“But six months would have been long enough. It interferes with getting back to life. By that time, your hair has grown back [from chemotherapy] and you’re feeling healthier again. It ends up feeling discordant as you sit next to people on chemo. You feel a little more like you don’t belong there,” she continued.

In her case, health insurance covered the cost of treatment.

Citrin and Chavez-MacGregor look forward to seeing a subset analysis of the study.

The Persephone researchers do plan to analyze blood and tissue samples from the trial. They’ll be looking for biomarkers to identify various risk groups.

“Similar studies in the past have tried to answer this question,” Chavez-MacGregor said.

“What’s really important about this study is it’s the largest we’ve had and probably ever will have. The details will be key, as will full peer review and publication, so we’ll get details of subgroups. Reporting of additional studies and longer follow-up on previous studies will also be important,” she said.

“I don’t want to minimize this study, but we need more information before we dramatically change what we’ve been doing. At some point, it could help us select patients who might not benefit from longer treatment,” Chavez-MacGregor said.

Allison wants other patients with HER2-positive breast cancer to know that the targeted therapy has limited side effects and big benefits.

“It was something I was incredibly happy to be a candidate for. Don’t be afraid of it. It’s a long haul, but it’s worth it for sure,” she said.

Ten years after her diagnosis, Allison is still cancer-free.

In stage 4, breast cancer has spread to distant organs.

“For metastatic breast cancer treatment, Herceptin is given until there’s evidence it’s not beneficial,” Citrin said.

Women with advanced HER2-positive breast cancer aren’t being left out of research.

CTCA in Chicago and other sites across the United States are currently enrolling people with HER2-positive breast cancer in a randomized clinical study.

The drug is to be used in combination with approved therapies for locally advanced or metastatic HER2-positive breast cancer.

People with and without brain metastasis will be included.

“Herceptin is probably the biggest advantage we’ve seen in breast cancer medicine in the last 20 years. Now we have five very effective drugs that target the HER2 protein. It started a whole new way of looking at HER2-positive breast cancer,” Citrin said.