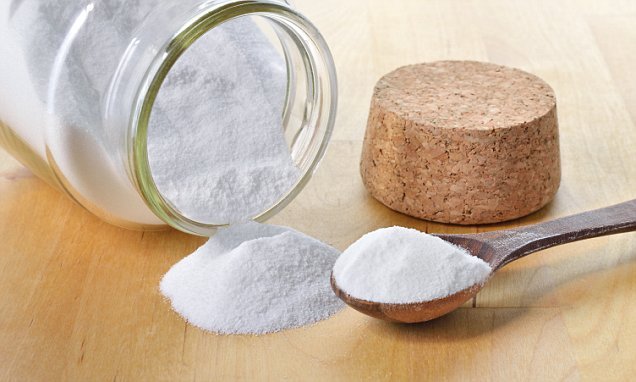 Baking soda could help fight cancer by making cells easier to target, a study has found.

Drinking the powder dissolved in water could make cells inside a tumour more active and easier for chemotherapy drugs to kill, according to researchers.

As a tumour grows bigger it cuts off the blood supply of cells inside it, causing them to effectively shut down and hide away.

Baking soda, however, could trick them into acting normally and becoming an easier target for chemotherapy drugs, which target active cells.

US scientists at the Ludwig Institute for Cancer Research hope their findings could pave the way for a cheap but effective boost for cancer treatment. 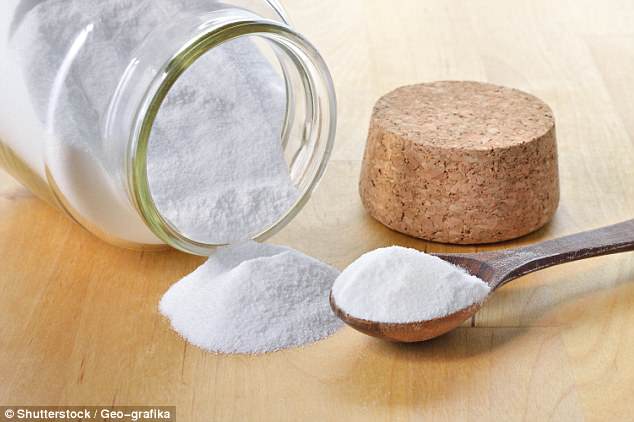 Baking soda, also known as bicarbonate of soda, is widely used in baking but some people use it outside the kitchen as mouthwash or to exfoliate their skin

The study looked at breast and colon cancer tumours in mice, and showed drinking water with baking soda boosted cell activity in tumours where there had been less activity before.

Because the cells are more active when baking soda – also known as bicarbonate of soda – is consumed, in theory they are more susceptible to cancer therapies.

Chemotherapy and immunotherapy may therefore be able to target more of the tumour, including dormant cells which cause the disease to come back.

The ability of baking soda to neutralise acids is key to the success of Dr Van Dang’s research.

In solid tumours large numbers of cells have their oxygen supplies cut off – a condition called hypoxia – which causes their pH level to drop and they become acidic.

When this happens the cells stop working properly – they stop producing proteins and their metabolism and body clock is disrupted, so they become inactive, or dormant.

‘Cells don’t want to make proteins or other biomolecules when they’re under stress,’ says Dang. ‘They want to slow things down and only awaken when things return to normal.’

If these dormant cells are cancerous and are not reached by treatment, they may reactivate after the original tumour is removed and make the cancer grow again.

However, baking soda is good at neutralising acid so drinking it could reduce the acidity of a tumour and bring the dormant cells back to life, the study suggests.

The findings – published today in the science journal Cell – are important because dormant cells cannot typically be killed by chemotherapy.

The team also found that activation of T cells – a type of white blood cell – which is essential to most immunotherapies, is also reduced by acidity.

‘But if you add baking soda to the drinking water given to those mice, the entire tumor lights up with activity.

The kitchen staple can be used for:

‘The prediction would be that by reawakening these cells, you could make the tumor far more sensitive to therapy.’

Baking soda has previously been reported to enhance cancer immunotherapy – in which the body’s own immune system attacks the tumour.

One of the co-authors of the new study, Robert Gillies of the H. Lee Moffitt Cancer Center, was involved in that research, but the mechanism behind the effect was unclear.

Baking soda is claimed to have other medicinal benefits such as relief for arthritis, avoiding births by Caesarean section, keeping organs healthy, freshening breath, and exfoliating skin.

After two weeks of drinking water with baking soda, people produced fewer immune cells that drive inflammation and more that dampen it down, according to research by the Medical College of Georgia.