Your entire workout is too slow. Really. You’ve probably been told to do controlled reps of most exercises, mastering your form and focusing on the burn in each muscle. But for all the endless hours you spend perfecting your technique, you still struggle to bound up a flight of steps and it’s wooooooork to chase your kids around the house.

The reason: Most weight-training workouts are designed to help you pack on muscle, burn fat, or add strength—not build power. And power is different from strength. Strength is your ability to lift a load, as you do when you raise your torso during a pushup. Speed is the rate at which you can activate muscle and spur movement. “Power is the marriage of strength and velocity,” says Ramsey Nijem, D.Sc., men’s basketball director of performance at the University of Kansas. “In a healthy kind of average-Joe population, training for power is actually underutilized.”

For years, top sports-team trainers like Nijem have pushed athletes to develop power. Power is what helps LeBron James explode for a dunk and Tyreek Hill go from standing to sprinting in a flash. Power happens in a millisecond, and for years it was hard to replicate that with classic tools like barbells and dumbbells. But as medicine balls and kettlebells have grown more popular, everyday trainers like Reinhard Nel, a coach at Onnit Gym in Austin, have started integrating speed and power movements into their clients’ workouts. Both kettlebells and med balls are good for acceleration-based moves (swinging and throwing), making you transfer energy quickly and forging power.

That means fast, fun workouts, and they’ll help your day-to-day life more than you think. Sure, squats give you the raw strength to pick up a big box from the floor. But when you want to heave that box onto a high shelf, you’re using power. Power helps you keep up with everyone on the basketball court or in a game of tag. You’re combining gym-built strength with acceleration. That’s the core of power, and you need to amass a reservoir of it now.

A little power training can also help you live longer—and better. Research shows that as you age, power declines earlier and more rapidly than strength, caused by multiple changes at the cellular level that diminish muscle’s ability to produce it. Your daily life offers few chances to train power, another reason why it erodes so quickly. As it erodes, it slows your reflexes, hurts your balance, and reduces tendon strength—three things that can lead to movement issues as you get older. “How do you stop yourself from falling?” asks Nijem.“You probably would whip that leg out as fast as you can to catch yourself. That [requires] power.”

The good news: It’s easy (and a blast!) to power up your workouts. Follow these rules and you’ll get springy in a hurry.

5 Rules to Power Up Your Training

If you resistance-train with heavyweights regularly, you’ve taught your body to create force. But when you’re lifting something truly challenging, you’re only going to be able to lift that weight slowly. “If you’re doing a one-rep max of a lift,”says Nijem, “you’re not moving fast enough to optimize power.”

The fix: Choose a weight you can lift, say, ten to 12 times before fatiguing. Yes, it’ll feel light. It’ll also let you focus on moving quickly and explosively with good form. And yes, form is still crucial. The faster you move, the more likely you are to get injured, unless you’re maintaining your form.

The best part about training with lighter weights: You can do it even without gym access. Working to move with as much speed as possible is an easy way to level up any go-anywhere bodyweight exercise. 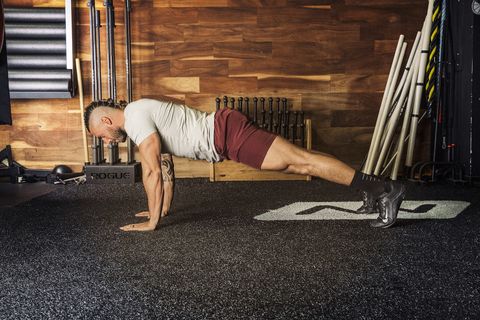 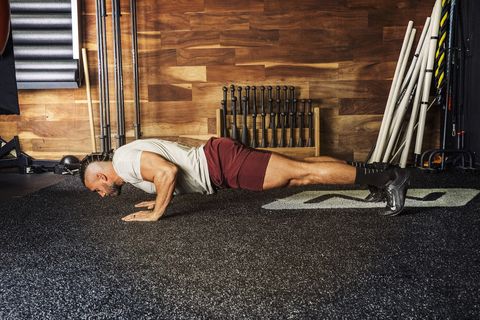 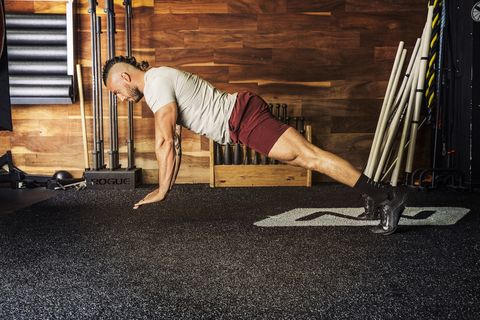 Start in pushup position. Bend at the elbows and shoulders, lowering your chest to within an inch of the floor. Press back up forcefully, driving your torso upward so your hands jump off the floor. Land with your elbows slightly flexed. Go into your next rep. Do 3 to 5 reps. Do 3 sets.

If you want to train power, the resistance band is your most underrated tool. “Bands teach you to accelerate through the sticking point,” says Nel.

Bands—especially heavy ones—naturally challenge your power: As you pull a band farther, it gets harder to pull. The best way to beat that: Pull the band faster when it’s at its loosest, so you have enough energy to survive the band’s resistance as it increases. This often works best for back exercises. (Think rows, Nel says.) 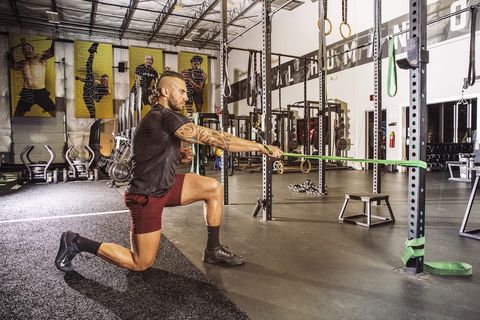 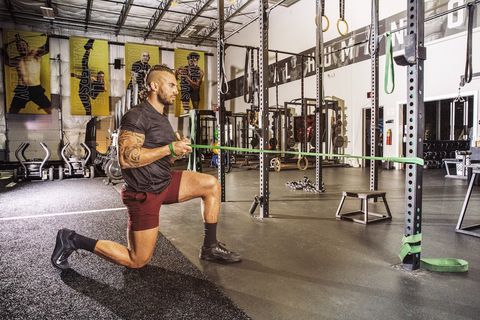 Grasp a hip-height band and assume a half-kneeling stance 3 feet from it. Keeping your hips and shoulders square to the band, pull back as fast as possible. Pause for 1 second, then release. That’s 1 rep. Do 3 sets of 6 to 8 per arm.

Standard gym practice dictates that you push every set nearly to failure. Not so when training power. “You don’t want to actually get close to failure,” Nijem says. The muscle fibers that produce power (fast-twitch fibers) aren’t meant to produce it for a long period of time. So do three sets of five reps, with a minute of rest between sets, when doing power moves. And concentrate on moving as fast as possible.

“Intent is key,” Nel says. “You have to focus on acceleration with precision throughout the movement.” 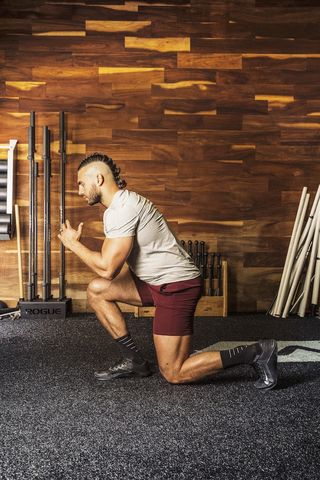 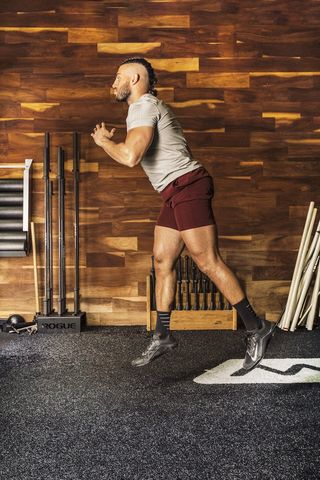 Do power exercises shortly after warming up. Power training relies on your “high-threshold motor units,” bundles of fast-twitch muscle fibers and the nerves that control them. Like Special Forces soldiers, they stay on the sidelines till the stakes are highest (when you’re lifting a heavy weight, working to failure, or moving a light weight fast). Burn them out on curls and they can’t drive power movements. 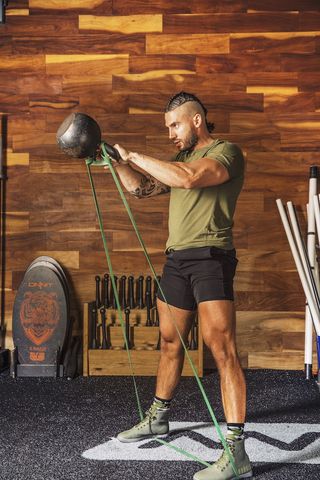 Start with your knees bent, a kettlebell in front of you, a band around your feet and the bell. Grasp the bell and pull it between your legs. Stand and squeeze your glutes, driving the bell up. Do 6 to 8 reps. Do 3sets. (Bonus: Follow immediately with a set of barbell deadlifts and expect to feel more explosive.)

The goal of power training is to push your body to move lighter loads fast. Adding rotational movements can do that, says Nel. “Rotation is the best way to develop more speed, more explosiveness, and more power,” he says.

Watch Aaron Rodgers uncork a deep ball. He plants his feet, rotates clockwise through his hips, then rotates forward and releases.

“Combine [rotational] force with your straight-ahead force,” says Nijem, “and you become the complete package.” 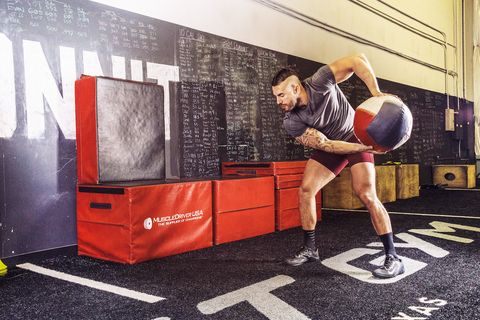 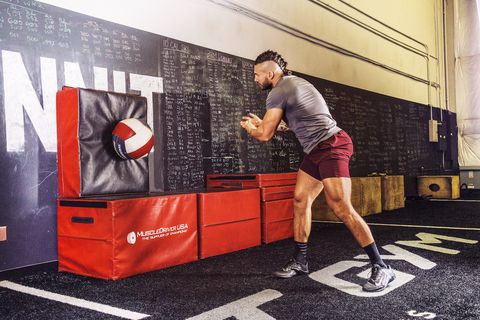 Stand about 6 feet away from a wall, your right shoulder facing the wall, a light med ball near your left hip. Twist to the left, then throw to the right. Catch the ball when it rebounds off the wall. That’s 1 rep. Do 3 sets of 5 per side.

This story originally appears in the April 2021 issue of Men’s Health.