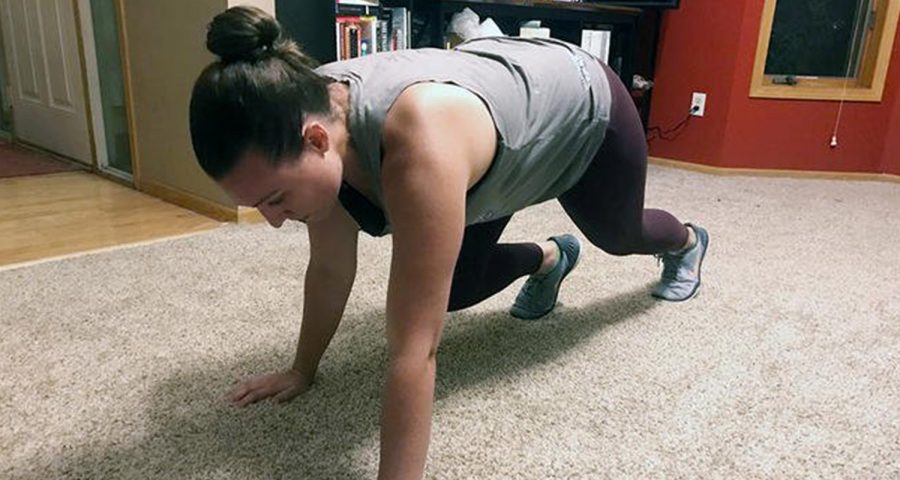 When we were babies, we crawled around until we were strong enough to stand on two feet. Once we graduated to walking—and eventually running—we never really looked back. But it turns out that spending time on the floor as an adult can make you stronger overall.

According to corrective exercise specialist Dani Almeyda, M.S., C.E.S., co-owner of Original Strength in North Carolina, the latest trend of crawling for fitness gives runners a little bit of everything they need: full-body strength, endurance, focus, and improved posture.

Not to mention, crawling is very low-impact, which can offer a nice break from all the pounding your joints take from activities like running. “Crawling can be a really good opportunity to develop strength without risk of injury and overtraining,” Almeyda says.

Intrigued by what I had been hearing, I decided to give this somewhat odd workout a try for two weeks. Almeyda prescribes crawls for many of her clients—whether they’re new to exercise or professional athletes—and sent over a seven-day routine (more on this later) that had me testing a few different basic crawls: baby, leopard, and axis leopard. This meant every day for two weeks I was crawling around on all fours for five total minutes.

RELATED: Kayla Itsines Fights Back Against Body Shamers Calling Her “Too Skinny”

The idea of crawling around on the floor might sound childish—even laughable—but trust me, just five minutes of exploring the carpet will challenge you.

WHAT YOU NEED TO KNOW

When you crawl, walk or run, the stabiliser muscles in your spine and pelvis light up to keep your torso from rotating. According to Almeyda, crawling strengthens these stabilisers, not to mention the prime movers that get you from one point to another, while safely lubricating joints like those in the hip that take on a lot of repetitive stress in running. The result is a stronger, more efficient running pattern.

RELATED: Jesinta Franklin Reveals Exactly How She Got Those Killer Abs

Almeyda had me start with the baby crawl, which is exactly what it sounds like. It’s the easiest crawling variation you can do, but you’ll still feel your shoulders and core working hard. Once you move into leopard and axis leopard crawling, your knees come off the floor, and your heart rate goes up.

Baby Crawl: Begin on the floor on your hands and knees. Keeping your back flat, initiate the movement by stepping your opposite hand and knee forward. Continue alternating sides, making sure to look straight ahead the entire time.

Leopard Crawl: Begin on the floor on your hands and knees. Keeping your back flat and your butt down, lift your knees off the ground a few inches. Initiate the movement by stepping your opposite hand and foot forward. Continue alternating sides, making sure to look straight ahead the entire time. (You might also know this as a Bear Crawl.)

Axis Leopard Crawl: Begin on the floor on your hands and knees. Keeping your back flat and your butt down, lift your knees off the ground a few inches. Imagine there’s a pole from your belly button to the floor; rotate around that pole by stepping your opposite hand and foot to move continuously in one direction. If you need to rest, drop to your knees and baby crawl. Switch directions midway through your time segment.

THE CHALLENGES ARE MORE THAN PHYSICAL

As I settled in for my very first day of crawling, I couldn’t help but feel a little silly. Here I was, a grown woman, crawling like a baby in her own home. And yet, it only took a couple of minutes for me to realize: crawling isn’t child’s play.

I could definitely feel my muscles working as I crawled from one end of my living room to the other. As I moved on throughout the week, it seemed as though my brain was working harder than my body. If I was feeling especially stressed or tired, it took grit and mental tenacity to keep myself moving along. There were times when all I wanted to do was drop and cancel the timer halfway through. But using a positive mindset and refocusing my attention on simply stepping one limb in front of the other helped me get through it.

Crawling offers another mental challenge: coordination. When we walk or run, our bodies create an X-shape, where the opposite foot and hand swing forward simultaneously. We don’t even think about it when running. But when we move to the ground, most of us have to relearn that movement pattern. Many people make the mistake of stepping their right hand and right leg forward, left hand and left leg, until they’re able to correct their pattern to keep the opposite hand and leg moving together. In fact, I had to make a conscious effort to coordinate my hands and feet every session.

The axis leopard crawl was especially challenging. No sooner had I gotten used to coordinating my limbs while moving forward and backward than I had to try and move laterally without tripping over myself. I have to admit I dropped to my knees more than once during my first attempt.

Thankfully, I started getting the hang of things after the first week. The movements started feeling more fluid, and I stumbled a little less every session. Five minutes still felt like enough of a challenge by the end, but I could definitely tell I was getting stronger.

IT CAN TAKE SOME ADJUSTMENT

After just a few days, I started noticing a little wrist ache midway through my crawl session. According to Almeyda, this achyness is common if you’re not used to being on the floor. She compares it to the process of transitioning from standard to minimalist running shoes. “Just ease into it,” Almeyda says. Stop to stretch out your wrists if you need to or cut your session short if the pain gets worse.

As I baby crawled my way down the span of my living room, it also occurred to me that my knees were essentially taking the place of my feet, which may cause issues for people with past or existing knee injuries. If the pressure of crawling on carpet is causing you discomfort, Almeyda suggests trying knee pads to create a softer surface. “If it’s really bothersome, then maybe that way of crawling isn’t for you,” she says. In those cases, it may be best to stick with crawling variations that have you using your feet instead of your knees.

HOW TO INCORPORATE CRAWLING

By the end of the two weeks, crawling had become a regular—even pleasant—part of my evening routine. Although crawling nonstop for five minutes wasn’t easy, I found that I felt more refreshed than exhausted when the timer went off. And once the movements became more fluid, I was able to focus less attention on coordinating my hands and feet and more on engaging my core, shoulders, and quads.

If you want to try crawling yourself, there are plenty of ways to add it into your routine. You can use crawling to warmup your joints before your run or to smoke your body at the end of your workout.

If you need a routine to get you started, you can follow the same schedule I did. With it, you’ll do five minutes total of one or more crawling variations six days a week. Use a stopwatch to track your time. If you need to rest, pause your timer so you ultimately complete five minutes of crawling. After you reach the end of week one, restart the routine for another full week.