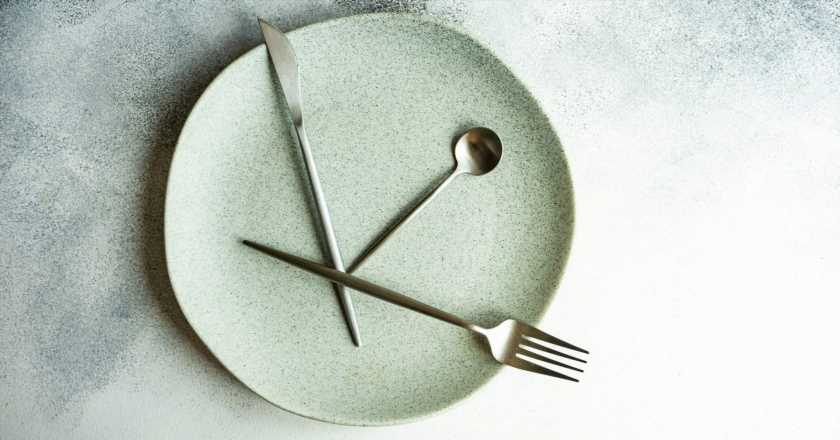 A certified breakfast fan, Strong Women editor Miranda Larbi gave intermittent fasting a go for a month to see if it could boost energy, reduce acid reflux and make it easier to eat healthier.

Breakfast is delicious. Hot buttered toast, honey-drizzled pancakes, smoothies, croissants… breakfast food is God-tier delicious. Most us will have been brought up to believe that breakfast is also the most important meal of the day and that getting that first meal right is the key to a productive day.

So why then are more and more of us skipping breakfast and waiting until lunchtime to eat?

Sugar detox: “Why giving up refined sugar for two weeks was the best thing I could have done for my health“

As a morning runner, I’ve been brought up thinking that an early bowl of oats or pots of chia pudding are the way to gain speed, strength and health. But there are plenty of other runners, weight lifters, CrossFitters and athletes who swear by fasting for energy, concentration and metabolic health boosts. While many intermittent fasting advocates enthuse about its ability to reverse type 2 diabetes, obesity and some symptoms of polycystic ovarian syndrome, is there anything to be gained from skipping breakfast if you’re not at risk from a metabolic disorder?

What is intermittent fasting?

There are loads of different types of fasting, from 48-hour water fasts to OMAD (One Meal A Day) and the better-known 5:2. The less extreme yet equally beneficial fast that more people might be familiar with is the 16:8 fast, in which you eat during an eight-hour window and fast for the other 16. It might sound daunting but all it really means is skipping breakfast and finishing your dinner by 8pm.

As with any kind of fasting, the idea is to give your system a total break from digestion. It takes around 12 hours for your system to digest all the grub you consume, which means that if you’re grazing all day, your body is constantly working to process that energy. By giving yourself a 16-hour food-free period, you’re allowing the body to relax after finishing that cycle – reducing inflammation and stress. For people like me who suffer from acid reflux and bloating, fasting can be a way to grant us a reprieve and reduce our symptoms, which can wreak havoc on our workouts.

A review of past animal and human studies in The New England Journal of Medicine suggests that intermittent fasting can reduce blood pressure, aid in weight loss and improve longevity. While many studies have concentrated on the benefits that fasting can have for diabetic people in stabilising blood sugar and losing weight, a 2016 study found that eight weeks of 16:8 fasting helped a group of men retain muscle while strength training – meaning that contrary to what some might believe, muscle fibres can grow or stabilise if you train without the omnipresence of protein shakes and meals. However, there are downsides to fasting. Disordered eating habits aside, almost 40% of people who were assigned to a fasting diet dropped out of a 2017 JAMA study – suggesting that the majority of people find it really hard to stick with.

So, I decided to give it a go for four weeks to see just how easy it was to follow and whether it was worth the faff. Here’s how it impacted my health and fitness:

The 16:8 is simple – all you really have to do is skip breakfast and then eat “normally” for the rest of the day

Starting the day off with a bang

In normal times, I’m a morning exerciser but during lockdown, I’ve taken to working out at lunchtime. There’s something totally luxurious about taking 45 minutes to run in the sun – knowing that your shower and kitchen is a 20-second walk from your desk when you get home. But deciding to skip breakfast meant reverting back to morning workouts as I wasn’t sure how much energy I’d have by 1pm. However lovely it is to move at lunchtime, I remembered how accomplished and switched on I felt from sweating first thing.

Normally after a morning run, I’d refuel with breakfast so that took a bit of time to get used to. By 9am, I’d be sitting at my desk with a mug of black coffee and my vitamins and know that I’d have to wait another four hours before eating something solid – not the most comfortable of feelings. But, I couldn’t deny that I felt totally switched on and alert, thanks to my morning workout.

11am tends to be the first dip of the day but because I’ve not been having a sugar dip, there’s been no crashing. I only really became aware of the difference in energy and concentration in week three, when I had breakfast in anticipation of going on a long run one lunchtime. To prepare, I had a good, carb-heavy breakfast of muesli, yogurt and a piece of toast and then set to work for a few hours. For the first time in weeks, my mind was everywhere but my work – something that only got worse when my plans changed and I could no longer go on my run. Had I really been this all over the place before, when I used to eat this sort of breakfast as standard? I put it down to having an intense sugar surge and dip which is fine when you’re working hard but rubbish for rest days.

You’d think that fasting would mean feeling more hungry, but actually, the reverse is true. Sometimes I’ve woken up feeling super hungry (the morning after a half marathon, for example), but the moment I start to move, the feeling goes away. I’m rarely hungry before lunch and if I am, I fill up on herbal teas or a warm turmeric milk (which isn’t strictly in the fasting rules but is a tasty anti-inflammatory). The one thing I have noticed is that having breakfast at the weekends has become a lot harder. I often have to eat my porridge around 7am if I want to be out on the road by 9am and it’s in recent weeks, I’ve really had to force myself to eat at that time.

Thinking of taking a ‘pre-workout‘ supplement? Here’s what you need to know

It’s obvious but one notable difference has been the time saved in the morning. It takes two minutes to make a coffee but about 15 minutes to make breakfast – which I used to eat while going through my emails. Now, I can just take a tray of drinks to my desk and take a proper food break at lunchtime where I eat my lunch away from my laptop. More quality time to enjoy meals, less time spent fiddling around in the morning.

Harder to eat breakfast when necessary

If I’m strength training, it’s usually for 40-50 minutes in the morning. Mid-week runs tend to be between 6-8km but on a Saturday, I run anywhere between 10 and 24km. It’s totally normal for me to workout and run in a fasted state for short periods of time but you need proper fuel to run a half marathon or over and so, I always try to have a bowl of oats at 7am – two hours ahead of setting out on the road.

That long-run breakfast tradition always served me well until I started intermittent fasting. These days, it feels so much harder to force down food that early in the day and I feel like it takes longer to digest properly. Perhaps it’s psychological but early breakfasts aren’t nearly as enjoyable as they used to be.

Only good change in regards to training

Despite the timing change, I’ve not noticed any negative difference in my strength or speed. In fact, I ran my fastest 5km for about three years during this challenge. For the past few months, I’ve been following a running programme on Garmin Connect which finished with a virtual 5km race. I’d tested myself a few weeks before (while eating breakfast) so that I could see how much I’d improved and knocked off over a minute, finishing in 23:29 minutes. I felt so good – which no doubt was down to the programme and training, but also the fact that I’d had a good pasta meal the night before and felt light on my toes that morning.

So, will I stick with it?

I’m sharper, faster and more concentrated during the day – and I’ve managed to cut back to one cup of coffee a day as a result. I’m less hungry if anything, and now enjoy my morning smoothie as a post-lunch dessert.  As for my training, I find that working out in the morning is such a great habit because it sets my mind up for the day. I’ve only noticed good differences in how I perform over shorter distances, and I’m certainly no less strong for waiting a few hours to refuel.

Monday-Friday, 16:8 really suits me and the way I work out. Perhaps it also largely depends on what you eat, rather than the timings. I’m sure, for example, if you eat a protein-rich breakfast that is very low in sugar, you won’t experience huge hikes and hips in concentration but many of us do enjoy carb-heavy meals. But life is for the living and sometimes, there’s nothing like breakfast in bed on a Sunday morning. For me, it’s made me appreciate the power and enjoyment of food much more – particularly how it can transform my running potential.

The point here is that this doesn’t have to be restrictive. I may have stopped having breakfast but I’m eating the same number of calories a day and eating exactly the same kind of good – just in a different order. This isn’t a diet or a weight loss programme (necessarily) but in my case at least, is just a more functional way of eating to keep my energy high and mind focussed throughout the week.

Interested in picking up some simple and nutritious recipes? Make sure you check out the rest of our meal ideas in the SWTC library.