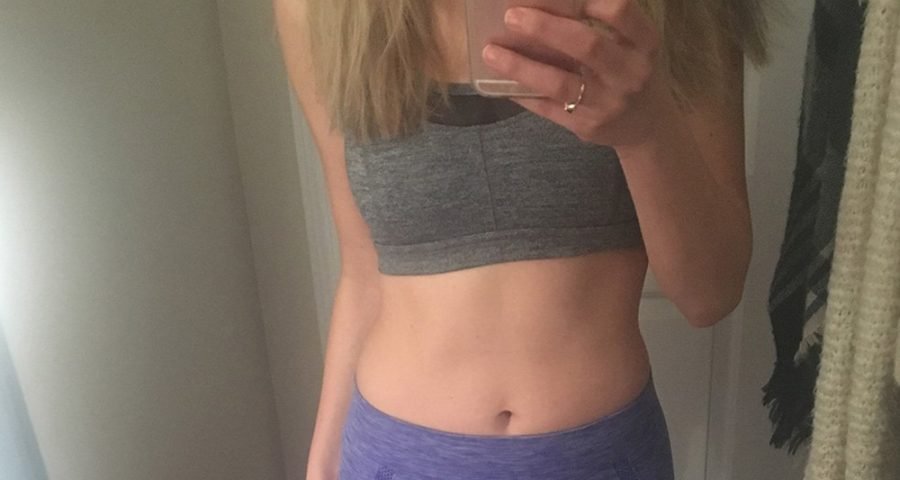 Fifty crunches a day—sounds like no biggie, right? I thought so too, at first. Normally, the only things I like to commit myself to are my husband, my extensive (and obsessive) skincare routine, and a well-deserved glass of cabernet (or three) after a long, hard day. But I was actually super psyched to take on this challenge I deemed a simple feat.

For most of my life I’ve worked out fairly consistently, running outside, going to the gym, or taking fitness classes at least three or four times a week. But something happened this past year that caused me to hop off the workout bandwagon, so to speak.

I recently got married. In other words, I spent the 365 days prior to my wedding date on a strict diet and fitness plan (of sorts). I made sure to carefully watch everything I ate and tried my best not to skip any workout classes. But by the time I walked down the aisle in October, I was more than ready to add back all of the cheese, carbs, booze, and more cheese back into my daily diet. I indulged during my three-week long honeymoon in Paris and Greece—and upon returning, I kept right on indulging through the holiday season.

So, as you can imagine, taking on this 30-day abs challenge was very welcomed at first. My only to-do before crunching on the daily was to reach out to fitness gurus to figure out what I might achieve by locking in my 50 a day.

“You can expect to see more changes mentally than physically,” Ben Boudro, C.S.C.S., warned me. “To be honest, there are way better exercises for your core than just plain old crunches, but that’s really not the point of doing a challenge.” Then what was the point of a challenge like this, I asked him? “Challenges have end dates so there’s always a light at the end of the tunnel, which helps people following through with said challenge,” he told me. “I don’t care if you just jumped over a stick, did pushups, squatted or only did planks—the bottom line is you exercised in a certain way for 30 days straight, which is a great accomplishment.” I liked his enthusiasm and belief in my commitment level.

“If you only do 50 crunches a day for a month, you will probably have a serious case of rug burn with a little extra strength in your upper abs, and maybe a little more definition,” Chris Ryan, C.S.C.S., a physical trainer and founder of Chris Ryan Fitness, told me, which sounded a little less exciting, but also realistic.

So I took the plunge and did 50 crunches every day for a damn month straight. Here’s what I learned.

Most of my friends are a four-hour drive away from where I live. Seeing them often isn’t always realistic, and connecting with them from afar isn’t always easy. So I figured, since I can’t recruit them for a boozy brunch on a random Saturday, but why not recruit them to do this challenge with me? A few buddies stepped up to the plate and signed on. We set reminders on our calendars and bugged each other incessantly when the clock neared midnight and we had yet to do our set. On some occasions we even FaceTimed while doing them.

Chris was not lying when he warned me about rug burn. The first location I chose for performing my daily crunches was, indeed, my rug. After all, what options did I have in my 500-square-foot New York City apartment? But after just two days of this, the rug burn was real. I then decided to move to my hardwood floor—big mistake. Those red marks turned to straight-up bruises I could feel every day at work as my lower back rested on my computer chair. That’s when I decided to use my yoga mat, which I should’ve been doing from the start. The rest was pretty much smooth sailing, in the injury department at least.

Though I committed to doing 50 crunches a day for a month, I didn’t commit to any kind of diet or additional exercise plan. I tried my best to make my three classes a week (and failed miserably at that), but I did keep up with my 50 crunches a day.

Since I wasn’t sticking to a diet, that also meant on Mondays, especially after a boozy weekend starring late-night pizza, the last thing my lethargic body wanted to do was lie back in the foetal position and go head-to-knees. I managed to do it, still, every day, but noticed a stark difference in my enthusiasm level on the days when I felt gross and bloated than the days when I had been eating decently.

Fifty crunches a day really is nothing in the scheme of things. Each day I spent no more than a solid minute in the crunch position and never even had trouble finishing all 50 at once. But still, getting myself to squeeze in that time was tough. I found every excuse in the book to push off my set of 50 until later and later and later in the day. My list of excuses included (but was not limited to): “I skied all day, I deserve a break,” or “I woke up too early this morning and I’m tired,” or “But it’s the weekend!”

I’m thankful that my husband gave me his infamous: “Are you effing serious?” look each of those times.

All in all, I’m glad I took on this challenge and, for once, committed to some form of a daily fitness routine. But I don’t think this is something I’d recommend to anyone gunning for a six-pack. If the goal was commitment, I won the gold medal. And while I definitely felt definition in my upper abdomen, I saw little improvement in my physicality (take a look at the before-and-after photos above).