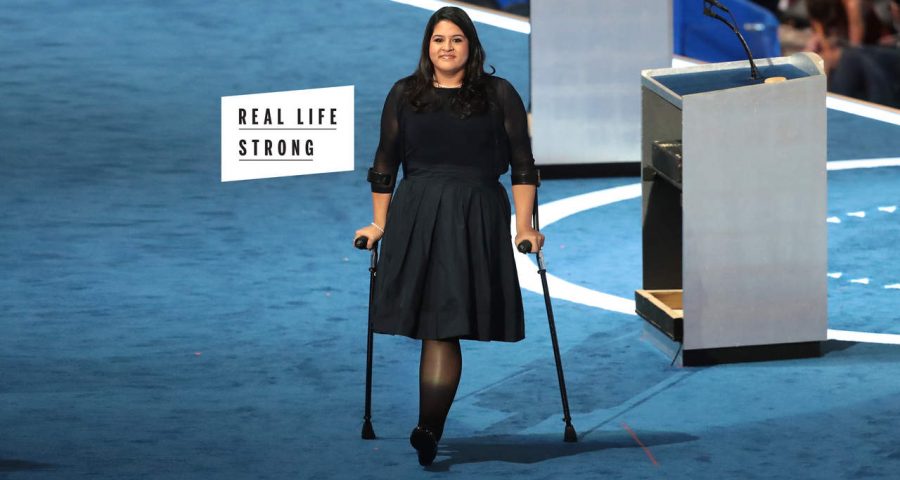 This story is part of Health’s #RealLifeStrong series, where we are celebrating women who represent strength, resilience, and grace.

When I was 2, I was hit by a car near my home in Ica, Peru, and pinned against a wall. I don’t have any real memory of that moment, but it resulted in the amputation of my right leg.

My parents sought specialized treatment for me in the U.S. I spent a lot my youth in Tampa, Florida, getting fitted with a prosthetic leg and learning to walk with it. But traveling from Peru to America multiple times each year was a strain for my parents. By the time I was 10, my mother made the decision to move to the U.S. She, my younger sister and I moved near family in New Milford, Connecticut.

Because she was undocumented, my mother couldn’t sign a lease on an apartment, couldn’t apply for most jobs, and couldn’t buy a car, much less get it insured. A psychologist in Peru, she earned money babysitting and housekeeping. She walked to her jobs, sometimes hours each way, even during Connecticut’s brutal winters. Still, she never complained.

I didn’t know my mom’s status. It wasn’t until I began applying for colleges and asked for my social security number that my mom told me, “No tenemos papeles.” We don’t have papers. As I began internalizing what that meant, I felt powerless, but going to college was a top priority to me. I didn’t give up. I continued filling out one application after another, although I didn’t check off the U.S. citizen box and ignored the line for a social security number. I ended up getting a full scholarship to Quinnipac University, my dream school.

Still, I was ashamed of my status. At college, when other students asked, “Where are you from?” I was internally conflicted about how to answer. Did I say I was Peruvian? Or from Connecticut? I grew up in the U.S. so it was home, but what rights did I have to claim? Did I have to pick one identity over another?

A few things happened over the following years to help me answer those questions. The first came in 2009, when my car was rear-ended. The title was in a good friend’s name; he’d bought and insured it for me while I made the payments. Paperwork from the accident led me to realize that my friend was taking advantage of me. The $400 I paid each month covered my friend’s two, or even three, other cars as well. I was humiliated.

Soon after, I was having pizza with my housemate, Tim, who’s now my partner. When he noted that I seemed off, I broke down and told him the truth: “I don’t have papers.” I had spent so much time in my head feeling embarrassed about my status that I expected Tim to feel the same.

Instead, his response was loving and caring—essentially, “So what?” What he meant was, “You’re still you. Nothing about you changes because you’re undocumented.”

I came out to a few people after that—another friend, a college professor. Then, in 2011, right before I graduated with a degree in sociology and political science, I heard the Senate was going to vote on the DREAM act [bipartisan legislation to provide a pathway to citizenship for young people with undocumented parents]. I called an organized with United Action of Connecticut and asked, “Can you connect me with someone? I want to share my story.”

Speaking at a Connecticut Democrats press conference was liberating. I found I could live my life, not live with lies. From there, my activism took off.

I became director of advocacy and policy for United We Dream, the largest immigrant youth-led organization in the U.S. Along with so many others, I helped championed the creation of DACA [Deferred Action for Childhood Arrivals], as well as DAPA [Deferred Action for Parents of Americans and Lawful Permanent Citizens].

Along the way, Tim and I married in 2012 and in 2015, I was sworn in as an American citizen. President Obama oversaw the ceremony at the National Archives. It was a powerful, emotional day.

When you become a citizen, you recognize the responsibility to do good and uphold American values. I felt not just the weight of that, but its privilege. I went home that night and filled out paperwork to help my mom get her green card.

I worked as the national Latino vote director for Hillary Clinton’s presidential campaign, believing she would bring about powerful immigration reforms. The night of the election, I was with Hillary’s campaign at the Javits Center in New York when we learned that she’d lost.

Like so many others, I was truly scared for what would happen. Before Hillary had even given her concession speech, I was on the phone with other immigration advocates. The landscape was going to shift quickly, and we needed to prepare.

Today, I work as deputy national policy director and the director of immigration policy and campaigns for the American Civil Liberties Union. My job: defending the rights of immigrants and refugees. No day is ever the same. The Trump administration’s strategy is attrition through enforcement.

This isn’t a job for the hopeless. A lot of times, it feels like trying to stop an avalanche by grabbing dirt in your hands. But we have to believe that we can stop it—and turn our country in a different direction. Look at the asylum seekers who’ve had their children taken from them. They’re still fighting. We have no right to complain.

After I lost my leg as a child, my parents discouraged people from rushing to help me. There were times I fell down and instead of picking me back up, my father coached me through the process of standing on my own.

The message I got from that? You’re going to have many falls, but you’ll always have the opportunity to get back up. That philosophy continues to inform my life.

We want to hear more amazing stories about #RealLifeStrong women. Nominate yourself—or a friend or family member—here. We’ll be sharing the most inspiring stories we receive in the months ahead.