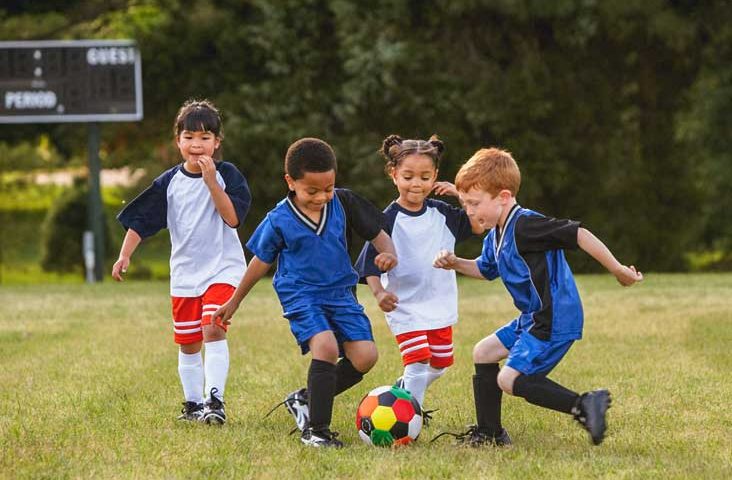 Gender stereotypes can discourage girls from sports and other healthy activities, but a new fitness program for preschoolers hopes to even the playing field.

When Leah Robinson was a child, she remembers having a great love of being active. But she felt discouraged from some forms of recreation due to a factor that was out of her control.

“I used to always love rough and tumble activities as a young kid, but [I would] always get pushed to the side because I was a girl,” Robinson recounted in a recent interview with Healthline.

Robinson’s experience is no fluke.

Overall, girls receive less encouragement from family members and teachers to be physically active and participate in sports. As a result, girls ages 8 to 12 are 19 percent less active than boys, according to a 2016 study.

Researchers also found that girls take almost 2,000 fewer steps a day on average than their male counterparts, and this disparity does have health consequences.

These findings led researchers to conclude that the physical education of girls was detrimentally impacted “by socioecological factors at the individual, family, school, and environmental levels.”

However, they also offered a ray of hope, proposing, “These factors are potentially modifiable, suggesting the gap in [physical activity] between boys and girls can be reduced.”

Robinson, an associate professor of movement science at the University of Michigan School of Kinesiology, is seeking to reduce this “potentially modifiable” gap.

As a researcher, she and her colleagues have developed a curriculum called CHAMP —Children’s Health Activity Motor Program — in order to jumpstart motor skills and physical activity in preschoolers ages 3 to 5.

The goal of the curriculum is to engender a lifetime of healthy living for both genders.

A recent study that tracked the success of the program is promising.

It followed preschoolers as they engaged in half-hour movement sessions twice a week over the course of nine weeks. Unlike traditional programs, CHAMP allows children to choose the skills they’d like to focus on (throwing, kicking, etc.) as well as the level of difficulty (low, medium, or hard) and the length of participation.

Yet, the study found there was still a gender gap. CHAMP boys participated in two more minutes of physical activity than girls and two less minutes of standing around.

“We do see that girls are engaged in the program,” said Robinson. “Unfortunately, we… have not been able to eliminate that sex difference between boys and girls. But they are… seeing better increases compared to girls who are not receiving the intervention.”

By teaching girls these skills early in life, Robinson hopes to help even the playing field between boys and girls as they grow older.

Additionally, physical education isn’t a requirement in many preschool programs, even though the recommended amount of exercise for this age group is three hours per day. At present, only half of this group gets this amount — and most of them are boys.

It may take a lot more than CHAMP to bridge this gender gap in physical activity.

Political philosopher Iris Marion Young wrote in her 1980 feminist essay, “Throwing Like a Girl,” that “it is in the process of growing up as a girl that the modalities of feminine bodily comportment, motility, and spatiality make their appearance.”

Women are “conditioned by their sexist oppression in contemporary society” to not engage with physical activity as much as men from an early age, she concluded.

According to Young, the physical activity of girls is limited not by any physical differences between men and women, but by oppressive patriarchal forces that constrict their movements.

This constriction can be seen in more than acts like throwing — which from hunting to baseball, is already perceived as a more “masculine” act in society’s eyes. Any rider on the subway can see how an act like “manspreading,” in which a man will extend the limbs of his body to take up maximum physical real estate, contrasts with how many women will shrink themselves to take up as little space as possible.

Overcoming the hurdles between girls and physical activity is daunting, because it effectively means fighting against a sexist society and its norms.

Conditioning starts as early as the playground, when common taunts like “You throw like a girl” dissuade young people from being physically active and tapping into their bodies’ full potential.

Robinson acknowledged the challenges. “There are various social [and] cultural factors that influence girls’ participation in sports,” she noted, adding the key is to be conscious of these factors.

Robinson recommended that adults, parents, and teachers “be very cautious of and try to be aware of what we say to individuals.” They must also be willing to “try to correct those behaviors and those actions [that might discourage girls from pursuing fitness]” — or any other pursuits, for that matter.

And when it comes to dismantling stereotypes, both conversation and education are key.

“I think the best way is communicating and talking about [societal challenges] and bringing them to light,” Robinson said, adding, “these are issues that we still face today… [not just] 10, 20, 30 years ago or more… Hopefully, one day people will say, OK, it’s time to really move forward and move past it.”

Working to build a better bridge

Implementing programs like CHAMP, which foster motor skills and a pro-fitness social environment from an early age, is an important step toward bridging the gender gap.

At present, Robinson and her colleagues are seeking funding in order to train others to help bring the curriculum to more schools.

Robinson’s ultimate goal is to persuade policy makers to institute CHAMP in pre-K to third grade classrooms across the country. She hopes to accomplish this “so I can say that every child hopefully is getting a solid foundation for movement that can get them on a healthy trajectory for activity across their lifespan.”

As for now, the National Institutes of Health is funding a five-year study that will examine the impact of CHAMP for 300 Michigan preschoolers in motor skills as well as other developmental health outcomes in areas like attention and memory.

Another study showed promising gains in these latter areas among CHAMP kids, although more research is required.

Eventually, Robinson hopes to track long-term gains across diverse populations, including LGBT young people, who face unique hurdles to physical education such as stigma related to sexuality or gender identity.

Robinson says she’d like to see an expansion of CHAMP to “see what may happen” when young people up to high school from various backgrounds are raised with a fresh approach to physical education and thinking about gender roles in fitness.

Fresh thinking about gender roles may be required from adults as well — particularly for those with the resources to help improve physical education in American schools.

What would Robinson say to a person who told her that boys are just naturally better than girls at sports?

“I would say put your money where your mouth is and let’s see if that’s really true,” she concluded.