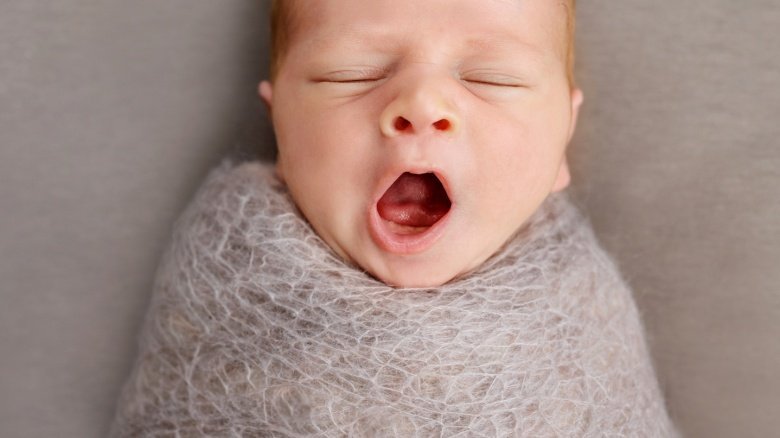 The world is full of wonderful, revelatory, and inevitably harrowing firsthand accounts of what the experience of birth is like for a woman. But what about the emerging infant’s POV? Though it’s obviously not possible to ask a baby what she or he feels (or remembers) about being brought into the world, there are some things about our first moments that are known, and/or can be reasonably speculated upon.

Who knew, however, that a sophisticated culinary palate can be developed while still in utero? Or that babies (of either gender) can grow mustaches before they can even grow hair? Or that a newborn’s first pee can resemble red, yellow, or green Pixy-Stix dust?

The wonders of creation may never cease, but they’re also a lot stranger than you might ever have imagined. Read on to find out why birth might just be the ultimate trip, just as the poster for 2001: A Space Odyssey suggested.

Pixie Dust pee? No, it’s not the magical tinkle of a fairy child — it’s the very un-magical (but still fascinatingly bizarre) powder that’s urinated out by some newborns. Believe it or not, “brick-dust” pee (yes, that’s an actual term) is a fairly common post-birth medical phenomenon.

But that’s not even the end of said painterly journey: Certain dye-saturated foods (like beets) and supplements you consume while breastfeeding can turn your baby’s pee into Technicolor greens and fuchsias, too. So if you prefer your milk cream-colored and your child’s pee clear, you might want to lay off the kelp, the carrots, the pomegranates, and the Skittles for a while. Or something like that.

You see everything through the lens of a smeary camera

Birth has long been an enduring theme in arthouse cinema: Filmmakers from Stan Brakhage on out have tried to capture the visual experience of being born. But as it turns out, the process of emerging into the world might not be all that different from a psychedelic film, after all.

According to experts at the American Optometric Association, a newborn’s vision is “abuzz with all kinds of visual stimulation.”  A baby can’t really tell the difference between one object and another: Even “highly contrasted” images appear mostly as one entity, as infants haven’t yet developed depth perception.

You may have a (temporarily) misshaped head

As most of us know, the skull plates of a newborn baby aren’t fully developed: It would be impractical for the bones to be fully formed or hardened at birth, considering that they have to fit through an opening that may or may not be large enough to accommodate them. That’s why some babies might appear to have whimsically (or alarmingly, depending on how you choose to see it) “misshapen” heads.

Not to worry, though. According to experts at the Mayo Clinic, such things are both normal and common (usually); and because a newborn’s skull remains “malleable” for some time after birth, said lopsidedness, or un-evenness, can sometimes take time to resolve itself.

It’s not every day that an adorable baby can get away with (also) looking like an adorable cartoon. Just think of your little one as a little Stretch Armstrong of sorts.

You may grow a mustache, and eat it

This is a bizarre one. And though it may sound like an old wives’ tale, professionals like anthropologist Stephen Juan, Ph.D., of the University of Sydney swear that it’s true. At about four months gestation, some fetuses grow mustaches. In fact, to hear Dr. Juan tell it, it sounds like they pretty much look exactly like Cousin Itt for a while there.

As Juan explained it for The Register, developing fetuses form a “soft, hairy coat” called lanugo, which is Latin for “woolly down”; as the hair naturally sheds, the fetus swallows it. Eventually, said hairs fuse into mucus and bile, and eventually reappear, after birth, in the form of the baby’s first bowel movement.

If you still have doubts, the experts at Healthline confirm: Lanugo is a real thing, and some babies are even born furry (after a fashion).

You'll be "shellacked" in a waxy white substance

Most people don’t think of babies as being encased in wax, like dolls, but the truth is that we’re all more or less born that way — if you want to “wax” poetic about it, that is. As Healthline explains it, the vernix caseosa — a protective, whitish layer on your baby’s skin — forms in the womb as a kind of water-barrier; it keeps the skin shellacked, so to speak, and therefore prevents it from wrinkling or pruning.

Because this “shellac” has antimicrobial benefits, de-waxing is often not recommended right after birth; the coating also acts as a moisturizer, and it’s sometimes left in place for 48 or so hours so it can continue to provide laminated comfort.

As a bonus, this coating also works to mama’s benefit: It makes for a much smoother labor experience (pun intended), as it is far easier to give birth to a smoothly coated baby than an rough uncoated one. So there’s a lubricant aspect to the whole thing, as well.

You may have already developed sophisticated culinary tastes

Some foodies will insist that a sophisticated palate is something that can only be developed through exposure to exotic and varied cuisines. However, interesting research suggests that even the most avid of wine and cheese snobs have nothing on certain babies, many of whom have acquired exotic tastes well before that first spoonful of pureed vegetables or fruits ever touched their lips.

Bio-psychologist Julie Mennella of the Monell Chemical Senses Center in Philadelphia told Psychology Today that such a theory makes perfect sense. After all, fetuses are said to swallow “up to a liter” of amniotic fluid a day during their last trimester. And, considering that amniotic fluid carries the flavors of the foods that the mother consumes (such as “curry, cumin, garlic, onion and other essences”) it does seem to be possible that great palates are born, not made.

You'll be kept warm by layers of something called "brown fat"

When you’re in the womb, you’re kicking, tumbling, and cavorting in something like perpetual summer — a single season with a temperature of 98.6, to be exact. Which means that being born inevitably equates to being instantly exposed to cold weather, even if the average delivery room (at about 70 degrees) is far from Arctic. So how do newborns adjust to such jarring temperature changes?

By way of something called “brown fat,” according to Dr. Richard Auerbach, a neonatologist at the Joe DiMaggio Children’s Hospital in Florida. Brown fat and soaring thyroid levels, that is.

“At birth, a baby’s thyroid level is sky-high,” Dr. Auerbach told Parents magazine. All it takes is the adrenaline of birth coupled with exposure to room temperature to activate the heating system that this very special layer of otter-like insulation provides. In other words, nature, like your mom, would never dream of letting you go out in such nippy weather without a coat.

You might not see much until later, but you'll hear everything

We’ve all heard of the benefits of singing, talking, and playing Mozart or Beethoven to your baby in utero. And these are all great ideas, because according to the experts at Healthline, by about four months gestation, your baby’s hearing is really starting to shape up.

In fact, if you’re a fetus, your hearing might even be better than your mother’s, largely because of your proximity to the inner sanctum of bodily sound itself. You might be able to hear the air moving in and out of your mother’s lungs, or hear her growling stomach from up close, or hear the blood rushing through your own umbilical cord.

Who can say? You might even be able to psychically hear your mother’s thoughts. It’s not that outlandish of an idea (or is it?) considering the mysteries of the parent-child bond.

You might feel pain as you're being born, but no one really knows how much

I think we can all agree: Pain is no fun for anybody. By almost all accounts, the discomfort-aspect of childbirth is as harrowing as it gets, but research suggests that it’s not exactly a first-class ride into comfort for the baby, either.

According to Time magazine, which chronicled a 2015 study carried out by researchers at Oxford University, newborns do indeed feel pain, and respond to it largely as adults do — though, the extent to which they feel it is still debatable. Still, it’s no stretch to imagine that a potentially hours-long passage into the world, complete with violent temperature changes and the potential folding-in of one’s own skull to accommodate one’s own passage is no picnic.

The good news is this, though: if it does hurt to be born, you won’t remember it. So happy trails, and happy birthday.