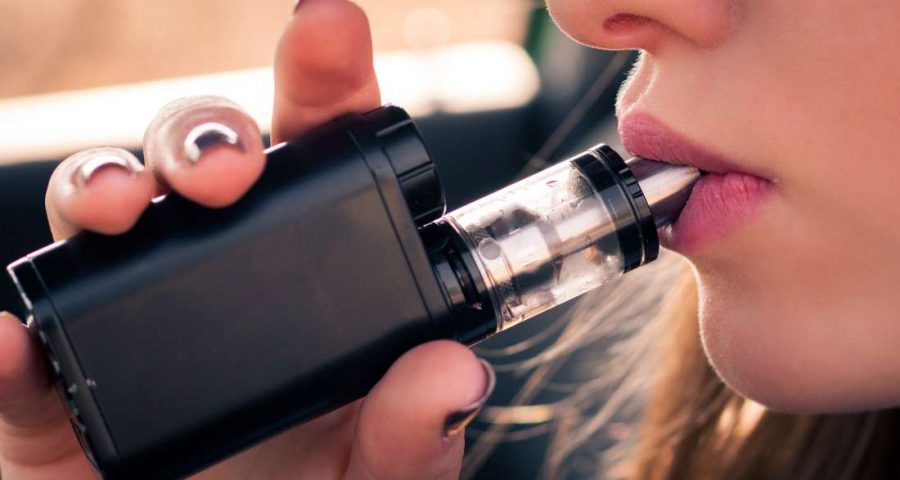 Read on to learn more about vaping and COPD, and discover how to quit smoking without using e-cigarettes.

Does vaping cause COPD?

E-cigarettes are relatively new and the research on their effects, especially the potential long-term effects, is limited.

Vaping products usually contain nicotine, a highly addictive drug, although they do not involve tobacco smoke inhalation. Some vaping products may also contain:

The U.S. Food and Drug Administration (FDA) require warnings on vaping products that contain nicotine and tobacco from 2018 onward.

The Centers for Disease Control and Prevention (CDC) suggest that vaping is less harmful than smoking conventional cigarettes. But the CDC advise against e-cigarette use by young people, those who are pregnant, or adults who do not currently use tobacco.

The research on vaping and COPD

There is only limited research that has looked at vaping and COPD.

A small study published in 2016, reports that nicotine-containing vaping products trigger lung inflammation and lung tissue damage. COPD development is associated with these effects. Both cultured human lung cells and mice used in the study showed dependency on nicotine over the course of the research.

Researchers discovered proteins in the airways of e-cigarette smokers that are known to contribute to COPD. All smokers in the study showed markers of oxidative stress associated with lung disease.

Research published in January 2018 found that mice exposed to e-cigarette vapor displayed DNA damage in the lungs, bladder, and heart. This damage may increase their risk of cancer, heart disease, and lung problems.

The researchers added that it was possible that e-cigarette smoke may contribute to similar damage in humans.

More research is needed on the health risks of vaping, especially in relation to COPD and other lung diseases.

It may be best to adhere to the advice of the Lung Institute until then, which does not recommend vaping for anyone, especially for people with COPD or other lung diseases.

The institute say that once a person develops a lung disease, such as COPD, emphysema, or interstitial lung disease, they should not inhale anything other than clean air.

COPD symptoms may not appear until the lungs have experienced significant damage.

Symptoms typically get worse over time, especially if people continue to smoke.

Symptoms in later stages include:

Breathing problems eventually make everyday tasks more difficult. They can be disabling in some cases.

Smokers should quit using tobacco products to reduce their risk of COPD development and many other health risks.

Those already diagnosed with COPD can reduce their symptoms and prevent further lung damage if they quit smoking.

Nicotine and smoking are addictive and quitting can be challenging. Only 4 to 7 percent of smokers successfully quit “cold turkey.” Other people need to plan how they will quit.

The National Institute on Drug Abuse advise that vaping has not been sufficiently evaluated as a tool to help people quit smoking.

The following tips may, therefore, be a safer alternative for those who wish to give up cigarettes for good:

Smoking cigarettes is the leading cause of COPD. There is not enough research to definitively say if vaping products also contribute to COPD development as they are relatively new.

Initial research, however, suggests a link between vaping and COPD and the Lung Institute recommend that people with COPD avoid vaping.

Individuals who are concerned about smoking or COPD should see their doctor for advice and a medical assessment. There are many support organizations available to those who wish to quit smoking.