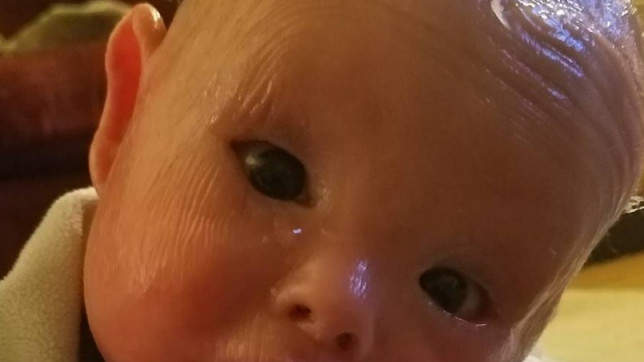 A mother from Washington State has raised more than $14,000 for her son’s medical care after he was born with a rare disease that causes severe facial abnormalities and thick, scaly skin on his entire body. The 1-year-old’s condition is so severe that he requires hour-long bleach baths to protect his skin from dangerous infections, and needs to have Aquaphor applied head-to-toe every two hours.

In May, 2017, Jamison Spam was born with harlequin icthyosis (HI)—a rare genetic condition that affects about one in 500,000 people, according to the National Organization for Rare Disorders, or about seven births annually in the U.S. To develop HI, babies must inherit two copies of an abnormal gene, one from each parent. Because the disease is recessive, parents can be carriers of this gene without exhibiting the disease themselves.

Even before he was born, his mother, Alicia Kay, and her doctors knew Jamison was sick. “I had surgery during my pregnancy, mid and pic lines, over 150 IVs, and was told 7 months into my already high-risk, traumatic pregnancy that he would not make it,” Kay wrote on GoFundMe. But despite doctors’ warnings that Jamison would be stillborn, she continued, “he came out crying and I knew he was going to fight.”

Jamison was, however, born with serious health issues. HI causes excess skin to grow in thick, scaly plates that can crack and split apart. This can affect joints and cause mobility issues and often affects the shape of the eyes, ears, nose, and mouth. Skin is pulled tightly around the eyes and the mouth, for example, forcing the eyelids and lips to turn inside out and appear bright red.

Because Jamison’s skin can’t shed harmful bacteria the way healthy skin can, USA Today reports, even a tiny cut could cause a life-threatening infection. Everything he touches has to be disinfected regularly, and he gets bleach baths twice a week—a process that’s so painful, his mother gives him morphine beforehand. Jamison’s parents also have to scrub off his excess skin with an exfoliating mitt.

In addition to his extensive skincare regimen, Jamison also has his temperature checked every two hours to make sure he’s not overheating. He also receives eye care, respiratory care, physical therapy, occupational therapy, and speech therapy.

“Because ichthyosis is a life-long condition, and because there is no cure, the goal of treatment is to alleviate symptoms and relieve pain/discomfort,” Jamison’s mother wrote on her GoFundMe page. She created the page to raise money for the family to travel to a conference in Nashville that will connect them with doctors, researchers, and other families dealing with the same condition.

About a month ago, the fundraiser reached its $6,000 goal, paving the way for the family to travel to Nashville. Kay continues to raise money for Jamison’s care, having now raised enough for a medical device called a nano-bubbler, which the family’s insurance company had twice denied. According to USA Today, the nano-bubbler provides a safer way to bathe Jamison, by exfoliating the skin with oxygen-filled bubbles.

“No more bleach baths once we have the Nano Bubbler equipment!” Kay wrote yesterday in an update on her GoFundMe page. “Thank you for making Jamison’s life more comfortable, coming from my heart I am so emotional.”

According to a 2017 case report in the Proceedings in Obstetrics and Gynecology, HI is often fatal in the neonatal period, before a fetus develops to full term. In the womb, babies with HI are at high risk for hypo- or hyperthermia, dehydration, respiratory distress, malnutrition, seizure, and other life-threatening complications.

If babies with the disease are born alive, they may survive “for several months or years in very rare cases,” the report states. The authors describe one baby born with HI at their hospital, who was “doing well” until her sixth day of life when she developed a skin infection. Despite treatment with antibiotics, she died at 11 days old.

But there are also are some inspiring stories of babies defying the odds. In 2013, the Foundation for Icthyosis and Related Skin Types (FIRST) published the story of a now 25-year-old woman named Stephanie who was born with HI. Stephanie’s parents were able to take her home after a month in the hospital, and, like Jamison’s parents, were tasked with caring for her skin, eyes, and other disease complications on a daily basis.

Things got better for Stephanie: “With the exception of a few hospital trips due to skin infections, I was just like any other child starting kindergarten at 5 years old,” she wrote. “I did have to rest a little more than the other kids and I had to stay in the classroom and play inside when it was too hot outside.”

According to FIRST, Stephanie is the second-oldest known person living in the United States with harlequin ichthyosis. In 2013, she and her husband also welcomed a baby boy—becoming the first known woman with the disease to give birth.

As for Jamison, his parents were happy to celebrate his first birthday last month, a milestone doctors thought he wouldn’t live to see. “Jamison is the strongest, bravest, little boy I have ever met,” his mother wrote on GoFundMe. “He overcame many challenges, and continues to do so.”