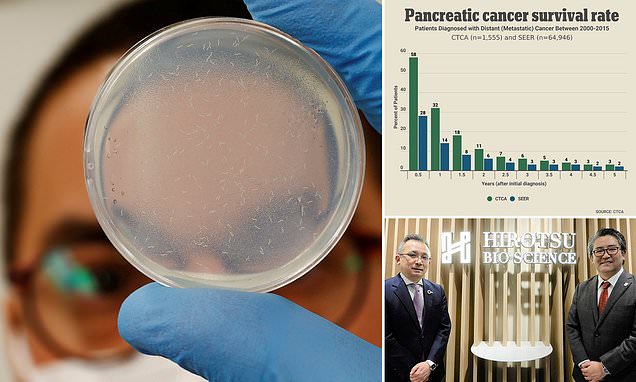 Scientists have developed the world’s first early screening test for pancreatic cancer — which uses worms to sniff out tumors.

The test — rolled out this month in Japan — is 88 per cent accurate and can spot the cancer at its earliest stage.

Toyko-based biotech company Hirotsu Bio Science hopes to bring the test to the US by next year.

Users send a urine sample to a lab in the mail, which is added to a petri dish full of dozens of worms called nematodes, which are about one-millimeter long.

They are known for their very strong sense of smell, which in the wild they use to seek out their prey.

The scientists genetically modified the worms so that they will swim away from traces of pancreatic cancer.

Studies of the tests showed it was more effective at detecting urine cancer tumors than other widely used methods of detection, such as using patients’ blood.

Pancreatic cancer is one of the most deadly types because it is hard to catch early due to a lack of symptoms, and by the time it is caught it’s usually too late.

Roughly 50,000 Americans die of pancreatic cancer every year, and the five-year survival rate is 11 per cent.

Because of the way it is sold straight to patients, the test wouldn’t need FDA approval to be made available in the US.

Company founder and chief executive Takaaki Hirotsu said: ‘What’s very important with early detection of cancer and these kinds of diseases is being able to sense very trace amounts.

‘And when it comes to that, I think that machines don’t stand a chance against the capabilities that living organisms have.’ 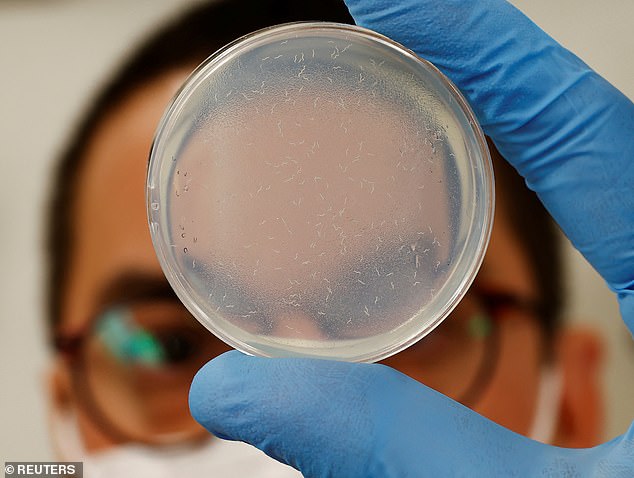 A urine sample is added to a petri dish with dozens of tiny worms, which have been genetically modified to swim away from traces of pancreatic cancer 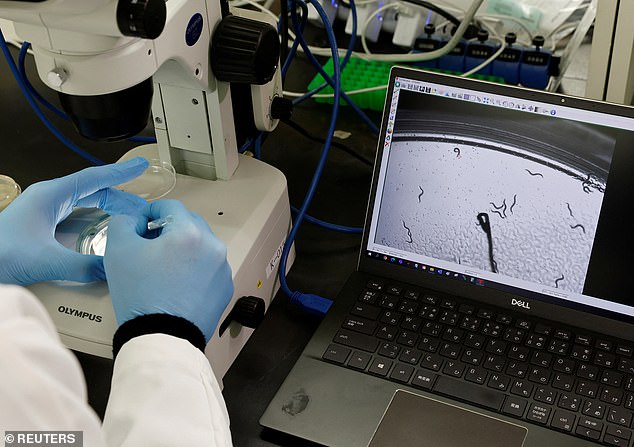 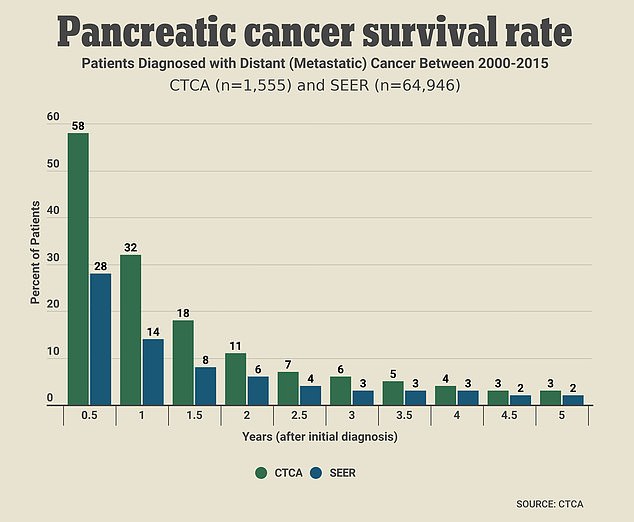 The pancreatic cancer survival rate rapidly decreases as time passes from initial diagnosis. The general five-year survival rate in America is 11 per cent, according to Cancer.net

Hirotsu Bio launched its first N-NOSE test in January 2020, which claimed to tell if users were at a high risk of cancer.

Around a quarter of a million people have taken the test, with 5 to 6 per cent receiving high-risk readings.

The pancreas test kits are sold directly to consumers, rather than a healthcare professional referring patients for the test, and cost $505.

Hirotsu focused on pancreatic cancer first because it is hard to diagnose and progresses very quickly.

There is also no single diagnostic test which can determine if a person has pancreatic cancer.

The company plans to roll out similar test for liver, cervical and breast cancer in the next few years.

But some doctors are skeptical of the results and consumer-based approach.

Hirotsu argued that the accuracy of the test is competitive with other diagnostic tools and is intended as an early checking method so patients can access further testing and treatment without delay.

TV ads using caricatures of the worms and the pancreas are being used in Japan to flog the tests, and will help the company build its brand, Mr Hirotsu said.

If the company can scale up, the test’s hefty price tag may reduce over time, he added.

Asked if he particularly likes worms, Mr Hirotsu said: ‘I feel like I have to give the answer that I love nematodes and I find them cute, but that’s not the case at all.

‘Really, I just think of them as research materials and nothing more.’

WHAT IS PANCREATIC CANCER?

Pancreatic cancer is one of the most lethal forms of the disease. Around 95 percent of people who contract it die from it.

It is the fourth-leading cancer killer in the United States. Around 10,000 people are diagnosed with pancreatic cancer each year in the UK, and 50,000 in the US.

WHAT IS THE CAUSE?

It is caused by the abnormal and uncontrolled growth of cells in the pancreas – a large gland in the digestive system.

WHO HAS THE HIGHEST RISK?

Most cases (90 percent) are in people over the age of 55. Around half of all new cases occur in people aged 75 or older. One in 10 cases are attributed to genetics.

Other causes include age, smoking and other health conditions, including diabetes. About 80 percent of pancreatic cancer patients have some form of diabetes.

WHY IS IT SO LETHAL?

Pancreatic cancer typically does not show symptoms in the early stages, when it would be more manageable.

Sufferers tend to start developing the tell-tale signs – jaundice and abdominal pain – around stage 3 or 4, when it has likely already spread to other organs.

WHAT ARE THE SURVIVAL RATES?

For all stages of pancreatic cancer combined, the one-year survival rate is 20 percent. At five years, that rate falls to just nine percent.

If the cancer is caught in stage 1A, the five year survival rates is about 14 percent and 12 percent for 1B.

At stage 2, those rates are seven and five percent, respectively. For a pancreatic cancer in its third stage, only three percent of people will survive another five years.

By stage IV, the five-year survival rate falls to just one percent.

WHAT ARE THE TREATMENT OPTIONS?

The only effective treatment is removal of the pancreas. This proves largely ineffective for those whose cancer has spread to other organs. In those cases, palliative care is advised to ease their pain at the end of their life.