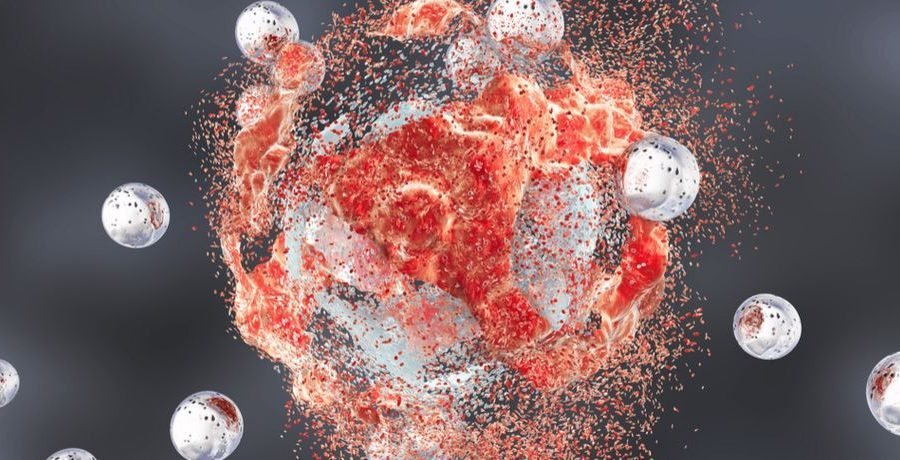 These hidden assassins are cloaked in a material extracted from the tumor itself and pass unseen through the bloodstream, delivering a killer protein to the cancerous cells.

Meet the ninjas of cancer treatment — a new class of biomimetic nanoparticles that carry a lethal load of a specific protein and, just like in a covert mission, transport it undetected through the bloodstream and deliver it to the targeted cancer cells.

The ingenious idea comes from researchers at Pennsylvania State University, who detailed their novel method of drug delivery in a study published in the Journal of the American Chemical Society.

As the Inquisitr previously reported, one of the hurdles in getting a cancer treatment to work is figuring out a way in which the body’s immune system will not attack the drug molecules sent it to reach cancer cells and destroy them.

According to Penn State, the body’s own cells have a way of signaling the immune system to leave them alone, something that cancer cells also do.

“Cells, including cancer cells, release small particles called extracellular vesicles that communicate with other cells in the body and send a ‘don’t eat me’ signal to the immune system,” explains a news release from the university.

And so, the research team had the brilliant idea of hijacking this comm system and use it to send in “camouflaged” nanoparticles that could pass unharmed through the body and attack the cancer cells.

These hidden assassins are cloaked in a material extracted from the tumor itself and pass unseen through the bloodstream, delivering a killer protein to the cancerous cells. Pretty neat, huh?

The newly developed system mimics the behavior of regular body cells and uses their own devices to bypass the immune system’s security.

“We designed a strategy to take advantage of the extracellular vesicles derived from tumor cells,” says Siyang Zheng, study senior author and an associate professor of biomedical and electrical engineering at Penn State.

His steam harvested extracellular vesicles of cancer cells and drained them of 99 percent of their contents, until they were left with a perfectly functional membrane that would be easily recognizable by the immune cells.

Inside this membrane the scientists stuffed a metal-organic framework (MOF) of their own making, built out of nanoparticles.

“Our metal-organic framework has very high loading capacity, so we don’t need to use a lot of the particles and that keeps the general toxicity low,” Zheng pointed out.

The nanoparticle framework carries a specific protein toxin derived from a plant indigenous to the Himalayan mountains. Known as gelonin, this protein “significantly inhibits the tumor growth in vivo and increased 14-fold the therapeutic efficacy,” the authors wrote in their paper.

Coated in the cell membrane that has “tumor” written all over it (or “regular cell,” as perceived by the immune system), the MOF travels through the body and seeks out other cancerous cells of the same type as the ones that produced the membrane.

“If we can get our extracellular vesicles from the patient, through biopsy or surgery, then the nanoparticles will seek out the tumor through a process called homotypic targeting,” Zheng pointed out.

The stealth coating offers the needed protection to carry the lethal protein to the desired location, untroubled by the vigilant watch guard of the immune system.

“Our biomimetic strategy makes the synthetic nanoparticles look like extracellular vesicles, but they have the desired cargo inside,” says Gong Cheng, study lead author and a former post-doctoral scholar in Zheng’s group, now at Harvard University in Cambridge, Massachusetts.

Penn State is looking to patent the procedure and notes that the system — which has been studied in a small animal model to weigh out its efficacy and toxicity — could be used to ferry other proteins as well, transporting them incognito through the bloodstream and administering them directly to the desired target.