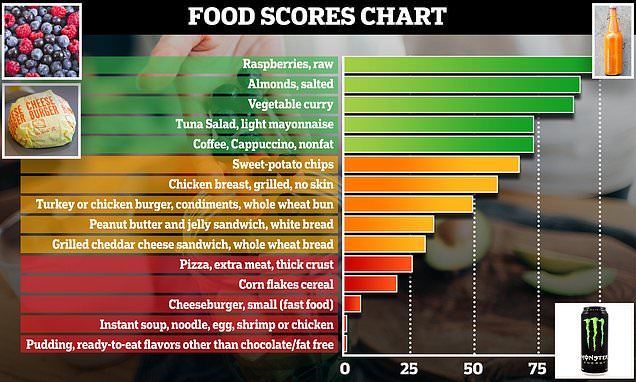 Raspberries and almonds are the best foods for your health but instant noodles and chocolate puddings are the worst, according to scientists who’ve ranked 8,000 snacks and drinks

Deciding what food and drinks are healthy has become more and more difficult due to a sea of conflicting claims on the internet.

But scientists say they have now developed a new ‘food compass’ that solves this problem for you.

Invented by experts from Tufts University, the chart include more than 8,000 food, drinks, and combined meals such as pizza.

The Food Compass Nutrient Profiling System scores foods based on their total health benefits and drawbacks out of possible 100 points.

Under the system, raw fruit like raspberries top the chart due their nutritional content, while instant noodles, famed for being extremely high in sodium, score a measly one point.

Surprisingly it says white rice with a soy sauce and an ice cream sundae are on par in terms of health, both scoring bad on the nutritional scale.

This is likely due to the white rice being a fast acting carb, similar to the sugars in ice cream, and with fewer nutrients and less fibre than brown rice, which scores higher on the scale.

Another surprise is that pasta scores only one point higher than a cheeseburger.

Similar to the rice, this is likely due to plain pasta containing few vitamins, minerals and fibre compared to the wholewheat version. 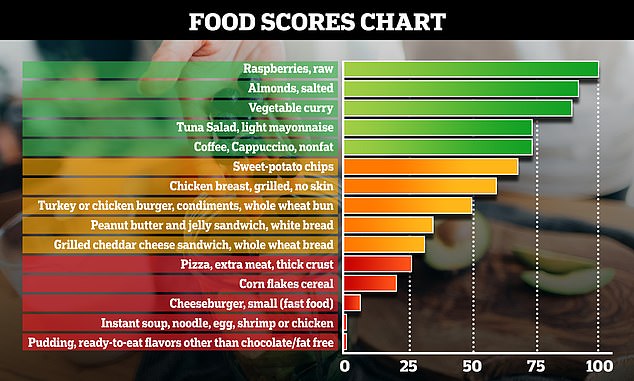 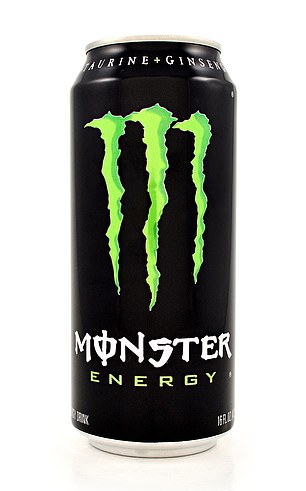 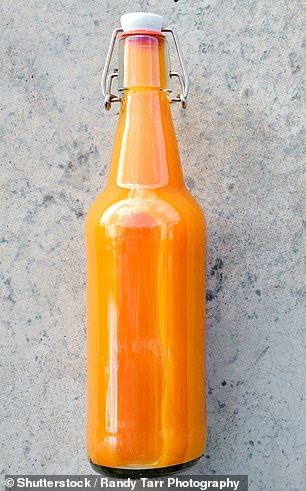 Under the Food Compass Nutrient Profiling System people should ditch the energy drinks like Monster which scores a one and opt for carrot juice which scores 100. 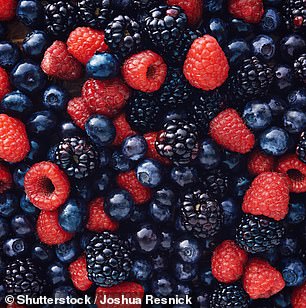 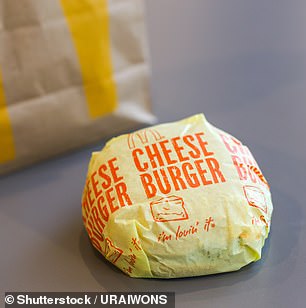 These foods scored highly based on their vitamins and minerals, and their ratios of fibre and protein compared to negative factors such as bad fats.

On the other side of the scale, the biggest food sinners were pudding, instant soups, fast food cheeseburgers, corn flakes and and a meaty pizza.

These foods were determined to have too many negative health impacts compared to their nutritional value and could contribute to diet related disease like obesity and heart disease if consumed too often.

Using Food Compass, eating food and drink scoring over 70 should be encouraged, those between 31-69 should be consumed in moderation, and anything lower than 30 should be mostly avoided.

The system assigns scores based on 54 ‘nutritional attributes’ divided into nine categories which are linked to diet related diseases such as obesity, diabetes, cardiovascular problems, and cancer.

Part of this also includes undernutrition, especially for mothers, young children, and the elderly.

Food Compass Nutrient Profiling System claims to give a better picture of which food and drinks are healthy compared to other systems.

The method is to assess foods by 54 aspects as they relate to human health both positively and negatively, and come up with a total score.

The system advises consuming food and drink that scores over 70 frequently, over 31 moderately, and under 30 in moderation.

The nine categories are nutrient rations which assesses aspects like fat and sodium, vitamin content, mineral content, food ingredients, attributes like the presence of nitrites, level of processing, levels of fat, fibre and protein content, and finally the presence of phytochemicals which are chemical compounds found in plants.

The Food Compass creators, from Tufts University in the US, claimed it has benefits over existing health scoring systems, helping people make more balanced choices.

Writing in the journal Nature Food, they said Food Compass equally considers both the healthy and unhealthy factors in food, whereas other systems just focus on the negatives.

For example, some systems that broadly tell people to avoid snack foods could steer people away from eating things like sweet potato chips, whereas, under the Food Compass system they are ranked as healthy as the grain bulgur wheat, both scoring 69.

Another touted benefit is that Food Compass considers the total nutritional value of a whole completed food, like a pizza.

This is in comparison to systems which have separate scores for wheat, meat, and cheese, but not one giving a score for a finished product containing all three.

The lowest scoring category was snacks and sweet desserts with an average of 16.4.

The creators of Food Compass hope it encourage the food industry to develop healthier snacks and food by developing products that score higher nutritionally.

Lead author of the system, professor Dariush Mozaffarian, said Food Compass should help clear the confusion about what people should be eating and drinking.

‘Once you get beyond ‘eat your veggies, avoid soda,’ the public is pretty confused about how to identify healthier choices in the grocery store, cafeteria, and restaurant,’ he said.

‘Consumers, policy makers, and even industry are looking for simple tools to guide everyone toward healthier choices.’

It is not known if any companies or public health bodies have signed up for the Food Compass System.

In the UK, there is voluntary traffic light system which is now a familiar sight on the front of pre-made foods on supermarket shelves.

Ministers urged manufacturers to adopt front of packaging labels a decade ago, in an attempt to tackle spiraling obesity rates by flagging products high in saturated fat, sugar and salt.

However, critics at the time warned it would not work because it was too simplistic, with foods containing helpful fats, such oily fish, falling afoul of the system while others such as diet fizzy drinks got a free pass.

But a recent international analysis into the public health impact of health warnings on the front of packaged has backed up the system.

The results of that prompted campaigners to call for the UK system, which is currently voluntary, to be expanded, including to restaurant menus.

Meals should be based on potatoes, bread, rice, pasta or other starchy carbohydrates, ideally wholegrain, according to the NHS

• Base meals on potatoes, bread, rice, pasta or other starchy carbohydrates, ideally wholegrain

• 30 grams of fibre a day: This is the same as eating all of the following: 5 portions of fruit and vegetables, 2 whole-wheat cereal biscuits, 2 thick slices of wholemeal bread and large baked potato with the skin on

• Eat some beans, pulses, fish, eggs, meat and other proteins (including 2 portions of fish every week, one of which should be oily)

• Choose unsaturated oils and spreads and consuming in small amounts