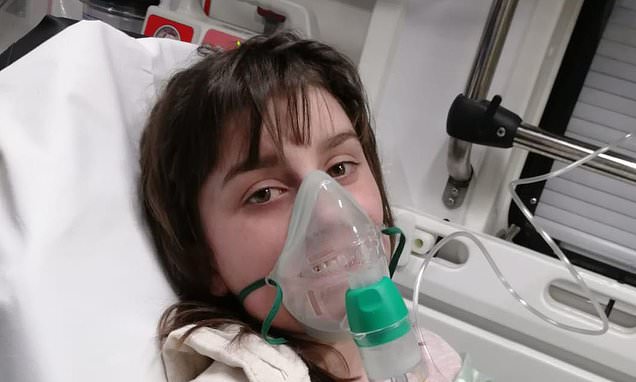 Milk allergy that can make a bubble bath lethal: Teenager’s experience has led experts to call for cosmetic products to carry ingredient warnings

Being super-vigilant is a way of life for Emelia Brain and her family after she was diagnosed with a potentially life-threatening milk allergy as a baby.

So severe is her allergy that even walking past spilt milk is enough to trigger a serious reaction.

But they now know this vigilance has to extend beyond food, after Emelia, 13, who also has asthma, suffered a serious reaction earlier this year to a bath bomb that contained milk protein.

She had been given the bath bomb for Christmas and although she checked the label before using it, she failed to spot the ingredient — it wasn’t in bold as is legally required on food products. 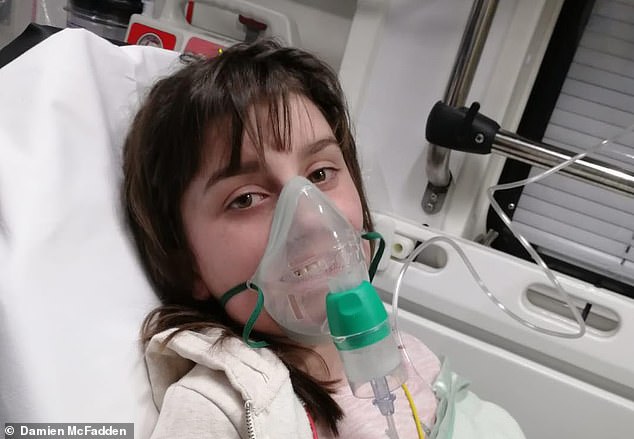 Emelia, 13, who also has asthma, suffered a serious reaction earlier this year to a bath bomb that contained milk protein

Within seconds of getting in the water, Emelia struggled for breath as her airway started to close.

‘It was terrifying — she was gasping for breath and her skin was rapidly erupting in big red welts, which were spreading up her body towards her neck — we pulled her out the bath and called 999,’ recalls her mother Maria, 41, a special needs adviser who lives in Codsall, Staffordshire, with husband Scott, 47, a car assembly worker, and their younger daughter Elisia, nine.

The paramedics arrived in four minutes and gave Emelia two shots of adrenaline before taking her to hospital, where she was given steroids. Thankfully, she recovered after a few hours. 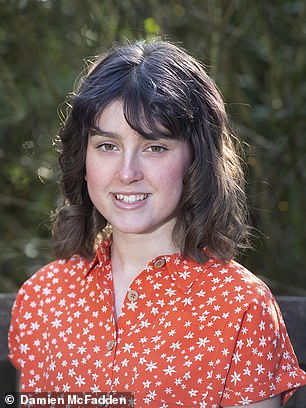 She had been given the bath bomb for Christmas and although she checked the label before using it, she failed to spot the ingredient — it wasn’t in bold as is legally required on food products

When Maria checked the list of ingredients on the bath bomb, milk protein was listed — but the typeface on the label was so tiny it was easily missed.

Doctors believe Emelia, who was diagnosed with the allergy when she was nine months old, inhaled the milk protein as it was released in steam.

Maria is now campaigning for clearer labelling of cosmetic products. Although all ingredients have to be listed, there is no requirement for the 14 major allergens to be highlighted in bold, as is legally required on food packaging. Through an online petition, she is calling for this to change.

‘This is a real problem, especially as lots of ingredients are listed under their Latin names, which many people don’t recognise and are not immediately identifiable,’ says Maria. ‘We have to make it clearer as confusion can kill.’

Recent research by Imperial College London, published in The BMJ earlier this year, revealed cow’s milk is the main single cause of food allergy death in children in the UK — claiming the lives of more school-age children than any other food, with 26 per cent of deaths between 1992 and 2018 (compared to 14 per cent caused by peanuts).

Dr Paul Turner, a clinician scientist in paediatric allergy and immunology at Imperial College London, who led the research, says part of the problem is a lack of awareness of the dangers of milk allergy.

‘Most people have heard of nut allergies but tend to think milk allergy is mild, perhaps because most children outgrow it,’ he says. Around 60 per cent outgrow it before they start school and 80 per cent by their teens.

‘However, for those who don’t, it remains a big problem — bigger than it is for a child with a peanut allergy, which most people are aware of, because milk is so common in our diets and people don’t recognise how dangerous it can be.’ He agrees there should be clearer labelling of allergens in cosmetic products.

Recent high-profile deaths of young people illustrate just how difficult milk protein is to avoid — partly because it is a ‘hidden’ ingredient added to everything from kebabs and fried chicken, sauces, marinades, popcorn to crisps. It’s used as a binder or stabiliser in the food industry and as a cheap source of natural protein.

The list of young lives cut short by milk and dairy allergy include Owen Carey, who died in 2017 while out celebrating his 18th birthday — he suffered an anaphylactic reaction to a grilled chicken meal marinated in buttermilk from the burger chain Byron.

This was despite telling a staff member that he had a milk allergy. The coroner said the company’s menu made no mention of potential allergenic ingredients.

Also in 2017, 15-year-old Chloe Gilbert from Melksham, Wiltshire, died after eating a kebab that had been marinated in dairy products she’d bought from a takeaway in Bath. The coroner recorded a verdict of accidental death.

In April 2018, Ruben Bousquet, a 14-year-old Londoner with a dairy allergy, died after eating popcorn from a cinema that was believed to have been cross-contaminated with milk at a factory.

As Dr Turner warns: ‘Milk protein is very hard to avoid as it’s added to so many different foods.

‘Roughly one third to a half of all dark chocolate, for instance, will contain residual milk protein as chocolate factories often use it to clean the machines — but it’s not listed as an ingredient.’ From October, Natasha’s Law (named after Natasha Ednan-Laperouse, who died after eating hidden sesame seeds) comes into force. It requires outlets to list all ingredients on pre-packaged foods for direct sale, and highlight any that can cause allergies, to try to avoid such tragedies happening again.

However, it’s not just milk being a ‘hidden’ ingredient that can lead to deaths, but confusion over allergies as distinct from intolerances.

Haruum Abdy, a three-year-old from Sheffield diagnosed with a milk and egg allergy, died after ingesting lactose-free yoghurt after his parents were told, wrongly, at a private natural healing clinic they’d consulted the day before their son’s death in 2017, to buy lactose-free products.

Lactose intolerance is not an allergy and is caused by an enzyme deficiency — which makes it difficult to digest lactose, a sugar found in milk — and does not involve the immune system, nor is it life-threatening.

Gideon Lack, a professor of paediatric allergy at King’s College London, says approximately 1,000 in every one million children have a milk allergy that persists when they start school.

‘The problem is that it’s unpredictable — we don’t know who may have an anaphylactic reaction, although having asthma, previous severe reactions and reacting to exquisite amounts of milk are risk factors,’ he says.

‘That’s why children with persisting milk allergy deserve to be given an EpiPen self-injectable adrenaline device once they pass the age of four. I don’t think this happens enough and these children can go unprotected.’

He points out that tiny amounts in foods can cause reactions — ‘it can be as little as 50mg or less that can provoke a fatal reaction’.

Dr Turner and his team are tackling the problem of milk allergy deaths in an ongoing study at St Mary’s Hospital, London, using desensitisation — where the child is exposed to minute amounts of cow’s milk protein in hospital conditions with adrenaline and antihistamines at the ready. The amount of cow’s milk protein is then increased every two weeks over a 12-month period.

Anna Phillips, 40, a pilates instructor who lives in London with husband Adam, 42, an events manager, and their three boys, says the treatment has been life-changing for her son Jamie, ten, who finished the course last May.

‘I’d been very nervous about him being exposed to milk even in hospital because of the anaphylaxis risk and although he did react — with hives appearing almost instantly — doctors were able to control it quickly with antihistamines,’ says Anna. ‘It’s a big commitment: it meant going to hospital every two weeks for a year but also giving small doses at home every day in between appointments, which was initially scary.’

Although Jamie isn’t cured, he can now tolerate 120 ml of cow’s milk a day, so he can have a cup of milk and enjoy foods such as milk chocolate, which he couldn’t tolerate before without reacting. More importantly, it cuts the risk of his reacting to traces of milk when eating out.

‘Before he had the treatment, I worried so much about eating out in restaurants and was stressed about what would happen when he became a teenager and wanted to eat out on his own,’ says Anna. ‘But now I feel more relaxed and confident about it, although we still carry an adrenaline EpiPen.’

To sign Emelia’s petition go to change.org and search for ‘beauty allergen’.

The bacteria in your gut might be linked to more than you think.

Feelings of anxiety can be reduced by changing gut bacteria through diet, a review of studies in the journal General Psychiatry suggests. This looked at 11 studies in 2019 where gut bacteria played a role in reducing symptoms of anxiety — five of the studies involved probiotics, six made use of other dietary changes such as removing carbohydrates that trigger bloating.

Professor Ted Dinan, from University College Cork, said: ‘We know that some strains of gut bacteria produce short-chain fatty acids, which travel to the brain and have a positive effect.’ Conversely, a less diverse mix of gut bacteria ‘might have a negative effect on mental health’. This may be due to reduced production of tryptophan, an amino acid made by gut bacteria which is the building block of serotonin — a brain chemical ‘that improves mood’.