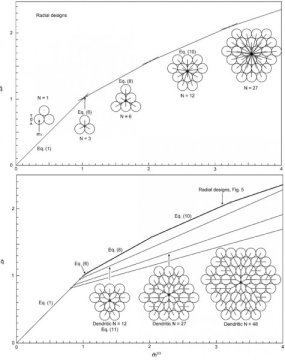 A scientist at Duke University says the natural evolution of social organizations into larger and more complex communities that exhibit distinct hierarchies can be predicted from the same law of physics that gives rise to tree branches and river deltas.

In a paper published June 15 in the International Journal of Energy Research, Adrian Bejan outlines how these seemingly disparate phenomena are actually connected through the constructal law of evolution in nature. Penned by Bejan in 1996, the law states that for a system to survive, it must evolve over time to increase its access to flow.

The human vascular system, for example, has evolved to provide blood flow through a network of a few large arteries and many small capillaries. River systems, tree branches, and modern highway and road networks show the same principle at work. Bejan has used these insights to predict the natural evolution and design of socioeconomic systems, the vast array of object sizes found throughout the universe, and the modern airplane, among many others.

With his newest paper, Bejan adds to the list the tendency for living organisms — most notably humans — to organize themselves into increasingly large and complex societies to have access to and make better use of finite resources. He also introduces the concept that innovation is nothing more than an idea that liberates flow locally, and increases all of society’s access to resources.

“Because of economies of scale, it is more efficient to move items en masse rather than as individual units,” said Bejan, the J.A. Jones Professor of Mechanical Engineering at Duke. “And because resources are moved over an area on the surface of the Earth, long distribution lines are needed to move large quantities of resources.”

In this paper, Bejan uses the commodity of hot water to illustrate his meaning. When human society was nothing more than a collection of huts, each building might have had its own fire to heat water. It would be much more efficient, however, to have a single fire located in the center of the community that could serve them all equally well.

This simple setup would soon become inefficient. As communities grew, those living on the fringes would either have to walk further to get hot water or build longer pipes, leading to wasted energy and heat loss.

The solution is to replace this simple radial design using only direct connections with a tree-shaped or “dendritic” distribution architecture. Such a structure reduces heat loss as the water is transported and requires less power to pump it.

Bejan uses a handful of simple designs featuring both architectures to show that the dendritic distribution solution is more efficient than the simpler setup. The result is an effort to show why humans naturally organize themselves into societies and why so many of the resulting distribution systems become hierarchical as their size and complexity increase.

“Water systems typically have one large treatment plant with several pumping stations moving from larger to smaller pipes before finally reaching individual homes,” explained Bejan. “Electricity is similar with few power plants and many strategically placed transformer stations. Even information has taken this form with a few large data centers serving several tiered steps of distribution before reaching your smartphone. And the reason these all have a similar hierarchical architecture lies within constructal law of evolution everywhere.”

Bejan finishes his paper by arguing that the true nature of an innovation is simply a local design change that increases the efficiency of the distribution of a resource to the entire population. While the individual innovator may benefit greatly from the idea, the entire community also gains better access to that resource, which serves to reduce overall inequality.

“The effect of innovation on controlling inequality is an argument for spreading education, know-how, and the spirit to question and take risks,” said Bejan. “These are the essential tools needed for generating innovation in areas of the world not traditionally known for it.”