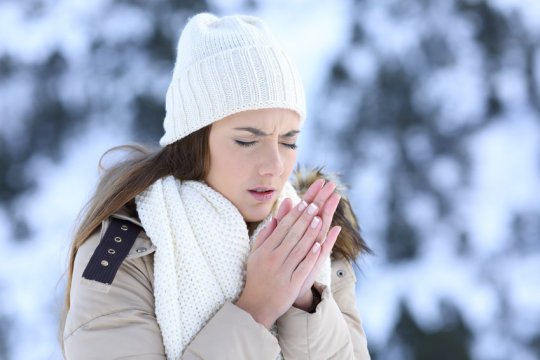 Sad but true, we don’t all respond equally to exercise. Researchers at Joslin Diabetes Center have uncovered a new kind of clue to this variable response — a hormone whose levels in the bloodstream rise sharply in exercise as well as in cold.

The finding came from the first comprehensive study of fat-controlling hormones (known as lipokines) in exercise. “This is a whole new area in research on exercise metabolism, and we seem to have found another mechanism by which exercise can have beneficial effects,” says Laurie Goodyear, Ph.D., Head of Joslin’s Section on Integrative Physiology and Metabolism and senior author on a report on the work published in Cell Metabolism.

Experiments in both humans and mice have shown that levels of one lipokine, with the unwieldy name of 12,13-diHOME, climb significantly in exercise, unlike the levels of other lipokines analyzed.

The study followed up on research published last year in joint work with the lab of Joslin’s Yu-Hua Tseng, Ph.D. This collaboration explored the release of lipokines from brown fat, which can burn energy in people or other mammals exposed to cold. In both humans and mice, the researchers demonstrated that the 12,13-diHome molecule was released from brown fat during cold exposure and offered beneficial metabolic effects.

“We found it very striking that when we then analyzed lipokines in exercise, the same lipokine that increased with cold also increased with exercise,” says Goodyear, an Associate Professor in Medicine at Harvard Medical School.

The Joslin researchers began by measuring levels of lipokines before exercise, immediately after exercise and three hours after exercise in the blood of 27 healthy male volunteers of various ages. When measured immediately after exercise, “12,13-diHOME really stood out quite dramatically,” says Goodyear. The scientists followed up by studying another set of volunteers, 12 healthy young people (split evenly between women and men) without regular exercise routines. Again, levels of the lipokine generally climbed substantially during exercise. Additionally, the scientists found that, in general, the more fit people were, the greater their resting levels of 12,13-diHOME.

The team next studied lipokines in exercising mice and saw similar results. “When mice do a single bout of exercise, we see an increase in 12,13-diHOME,” Goodyear says. “We also saw an increase after exercise training.”

Next, the investigators looked at molecular clues to the source of the lipokine and discovered that brown fat was a likely suspect. This was confirmed when the scientists removed most brown fat from mice and found that 12,13-diHOME levels in exercise dropped sharply. “It seems to be the first example of a hormone released from brown fat that might regulate some of the metabolic effects of exercise,” Goodyear notes.

Researchers around the world look for ways to increase energy expenditure, and thus reduce obesity, by boosting brown fact activity. “Most of our data suggests that exercise doesn’t ramp up the energy expenditure of brown fat, but here, exercise is clearly having an effect on brown fat,” she says.

Further work in both mice and mice muscle cells that were given 12,13-diHOME revealed that the lipokine acts as a signal to boost the use of fatty acids as fuels, Goodyear adds.

She and her colleagues are broadening and deepening their research on the role of the lipokine, and other lipokines that decrease during exercise, in larger human cohorts as well as in further animal studies. “The more knowledge we have about exercise and how it works, the better we can understand how to combat metabolic disease,” she says.