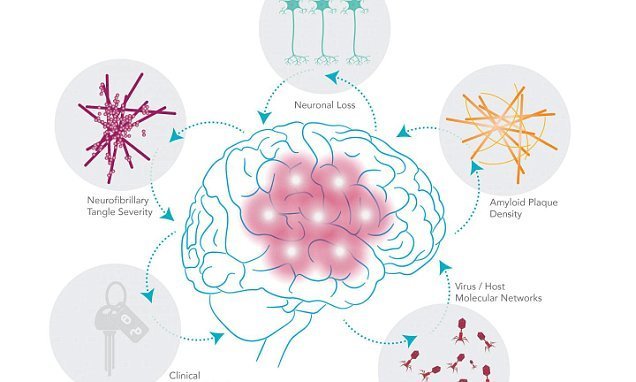 Does herpes speed up Alzheimer’s? Virus strains that 90 percent of us have are ‘abundant’ in brains of sufferers, new research finds

Herpes viruses may raise the risk Alzheimer’s by moving into the brain and disrupting human genes involved in the disease, new research suggests.

The common virus has many strains that can cause everything from cold sores to genital lesions and chronic fatigue syndrome.

In recent years, several studies have found links between strains that have migrated to the brain and the development of Alzheimer’s disease.

The theory has remained controversial, but Mount Sinai researchers have found compelling new evidence of the links between herpes viruses and Alzheimer’s. 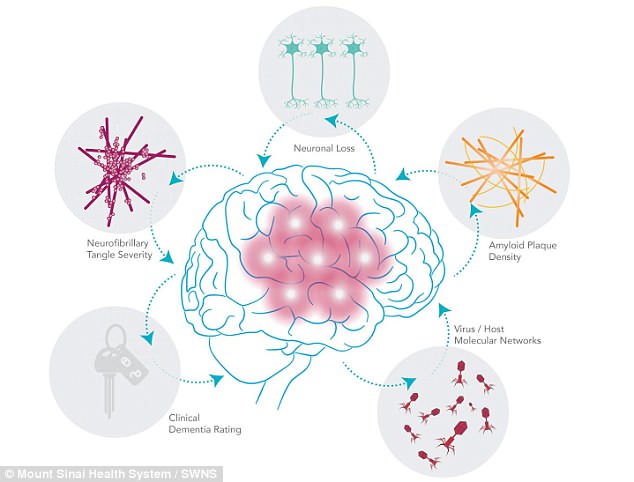 Strains of the herpes virus that some 90 percent of people pick up as children may disrupt human genes to raise Alzheimer’s risks, new research suggests

Alzheimer’s robs five million Americans of their memories and independence and, as the population ages, the disease’s toll will only climb.

Herpes viruses are even more common, and two that the Mt Sinai researchers explored – HHV-6A and 7 – infect 90 percent of young children.

Scientists have been scrambling to find explanations for what causes Alzheimer’s and treatments to fight back its progress. Among the causes that some have explored are herpes viruses.

But to this day, more questions than answers remain.

The researchers at Mount Sinai went looking for treatment targets, but instead found – much to their alarm – an uncanny link between Alzheimer’s and certain herpes viruses.

‘The title of the talk that I usually give is, “I Went Looking for Drug Targets and All I Found Were These Lousy Viruses.” We didn’t set out to find what we found. Not even close,’ says study co-author Dr Joel Dudley.

‘We were trying to find drugs that could be repurposed to treat Alzheimer’s patients, but the patterns that emerged from our data-driven analysis all pointed towards these viral biology themes.’

They were not the first to observe this link. Previous research has found antibodies against HSV-1 – the form of herpes that causes cold sores – in the blood of people that developed Alzheimer’s, indicating the virus’s presence.

This theory emerged around 2014 and in the following couple of years it generated widespread panic as an estimated 80 percent of the US population may have HSV-1.

Herpes viruses are thought to interfere with the the limbic system, which plays a key role in our emotions, moods and instincts.

But until now, this was just a theory to explain associations seen between blood samples and Alzheimer’s disease development.

There are nine different herpes

In the new research, the authors found not only that Alzheimer’s patients not only had higher levels of two strains of the herpes virus – HHV-6A and 7 – but that these viral genes were actively disrupting the human genes that increase Alzheimer’s risks.

‘What’s clear is that they’re perturbing networks and participating in networks that directly accelerate the brain towards the Alzheimer’s topology,’ says Dr Dudley.

These two viruses are not sexually transmitted, like the previously studied HSV-1.

Rather, HHV-6A and 7 are extremely common viruses that 90 percent of children pick up in their first few years of life and they often remain asymptomatic.

‘We found viral genes in the brains of our patients with Alzheimer’s to much greater extent as compared to aged controls and patients with other neurodegenerative diseases,’ study co-author Dr Sam Gandy told Daily Mail Online.

‘We didn’t expect to find this so checked tow other brain lab samples to be sure there wasn’t something wrong with our samples and sure enough, we saw the same transcriptions and genomes.’

Though their discovery adds weight to what was previously a fairly loose correlation between Alzheimer’s and herpes – albeit a different strain.

‘Our story doesn’t say that the HSV-1 data [from previous research] were right or wrong, just that we have evidence that our [HHV-6A and 7] viruses that were were studying are in the brain,’ Dr Gandy said.

Instead, he suggests that the two may mount a sort of coordinated attack on the brain, and that other factors may too be at play, and urges that their findings are not cause for panic.

‘I wouldn’t want to cause undo alarm among people who have this virus,’ said Dr Gandy.

‘It’s fairly common, but this is early days so we have to look at if childhood or early virus contraction increases risks later, which would be a long study of childhood infections and late-life degeneration, but that’s something that can be done.’

Studies of other viruses and neurodegenerative diseases – specifically, retroviruses and ALS – have indicated that there may be some hope for mitigating the neurological damage a virus can do.

Antiretroviral treatments for those positive for a particular bug and ALS helped to slow down the progress of the neurological disease.

While they’re a long way off from trying it out in a clinic, this suggests to the researchers that the effects of antivirals for herpes on Alzheimer’s development and progression might be worth exploring in the future.

‘We’re learning more about a disease that we’ve been studying for 100 years and now, with new technology we find things that we hadn’t expected before,’ said Dr Gandy.

‘Unfortunately, that doesn’t mean anything will be available tomorrow, but it certainly sets us on a path that may give us unexpected ways of intervening with therapy.’