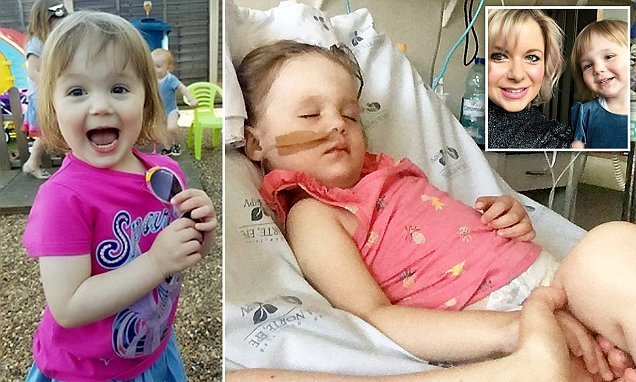 Girl, 3, is left fighting for her life in hospital after suffering a stroke during a family holiday to Portugal

A three-year-old girl is currently fighting for her life in hospital after suffering a stroke during a family holiday to Portugal.

Holly Alcock, from Stafford, had flown to Albufeira in the Algarve for her first ever holiday with her mother, father, brother and her grandparents.

But her first trip abroad ended in her collapsing after just three days from a stroke and being airlifted to a specialist hospital in Lisbon.

Speaking today for the first time about his daughter’s terrifying ordeal two weeks ago, her father Mark, 37, revealed she has been left like a newborn child.

Holly, who was left in a coma for five days and remains seriously ill, is unable to sit up, stand or talk. But she is slowly recovering. Holly Alcock had flown to Albufeira in the Algarve for her first ever holiday with her mother, father, brother and her grandparents (pictured before the holiday)

Mr Alcock, a town and account planner, described the experience as ‘every parent’s worst nightmare’.

He said: ‘We’ve had to teach her everything again – everything was affected from her speech to her psychical movements.

‘Holly can now hear and feel us and laugh at our daft jokes which is a great sign. Her legs are getting better and she was able to hold her arms up longer yesterday.

‘She’s not able to sit up or eat properly though – so it’s just small steps, it a slow process to recovery. She’s funny, cheeky, confident, loves dancing and singing.

‘She’s full of character and life but now she’s like a newborn child which is sad to see. It just been our worst nightmare. We are spending 14 hours a day in hospital.’

Holly had flown to Albufeira for her first ever holiday with her family on Tuesday, June 5. It is believed the family took out medical insurance for the trip before they went. Speaking today for the first time about his daughter’s terrifying ordeal two weeks ago, her father Mark, 37, revealed she has been left like a newborn child (pictured before her trip)

The toddler had been suffering with tonsillitis before they set off – but after a course of antibiotics she was given the go ahead to travel.

She showed no signs of the illness, but her mother, Gemma, 34, took her to a local hospital on the Thursday for a check-up because she was sleepy.

Mr Alcock said: ‘They told us she would be fine in three days but on the Friday she woke up normal and then an hours later she collapsed.

‘My wife took Holly to the hospital in Faro. It was an hour’s drive from where we were staying in Albufeira.

‘I took our youngest, Jacob, to my parent’s villa and followed behind. It was pretty scary there was around eight or nine doctor in a small room with Holly.

‘Her eyes were gone – she just looked out of it. It was heart breaking, we expected it to be dehydration but in minutes we were told it was much worse.

‘The doctors had thought she had been poisoned. We were told that she had thrombosis which had reached her brain on the Friday mid-afternoon.

‘On the Saturday morning she didn’t wake up – they took her for an MRI scan and it revealed that she had a stroke on the Friday evening.’

Holly was then flown to a specialist hospital in Lisbon. Her parents asked if they could fly with her, but doctors refused to let them. The toddler had been suffering with tonsillitis before they set off. She showed no signs of the illness in Portugal, but her mother, Gemma, 34, took her to a local hospital two days after landing for a check-up because she was sleepy (pictured with her mother before the trip) Holly is pictured with her mother Gemma, 34, father Mark, 37, and brother Jacob, 18 months, on the flight out to Portugal Holly, who was left in a coma for five days and remains seriously ill, is unable to sit up, stand or talk. But she is slowly recovering (pictured before the holiday)

The family then drove 160 miles (257km) to the capital in a rented car, which Mr Alcock described as the ‘worst three of my life’.

He added: ‘We asked the doctors if she would live or die or have brain damage and they couldn’t tell us.

‘She had a mask put on her and tubes everywhere – we were told we couldn’t talk or touch her.

‘She was in a deep coma but as the days went by she opened her eyes a couple of times but didn’t have full consciousness.’

Mr Alcock and the family have set up a JustGiving page to help raise money for any further treatment Holly needs.

He added: ‘We don’t know how bad the damage to her will be or how her recovery will go. It could be used for any treatment she needs like a wheelchair or anything else.

‘But we are hoping it can be used for treat for her like a trip to Disneyland – she’s always wanted to go.’

Anyone wishing to donate, can do so here.

WHAT IS A STROKE?

There are two kinds of stroke:

An ischemic stroke – which accounts for 80 percent of strokes – occurs when there is a blockage in a blood vessel that prevents blood from reaching part of the brain.

The more rare, a hemorrhagic stroke, occurs when a blood vessel bursts, flooding part of the brain with too much blood while depriving other areas of adequate blood supply.

It can be the result of an AVM, or arteriovenous malformation (an abnormal cluster of blood vessels), in the brain.

Thirty percent of subarachnoid hemorrhage sufferers die before reaching the hospital. A further 25 percent die within 24 hours. And 40 percent of survivors die within a week.

Age, high blood pressure, smoking, obesity, sedentary lifestyle, diabetes, atrial fibrillation, family history, and history of a previous stroke or TIA are all risk factors for having a stroke.

SYMPTOMS OF A STROKE

Of the roughly three out of four people who survive a stroke, many will have life-long disabilities.

Both are potentially fatal, and patients require surgery or a drug called tPA (tissue plasminogen activator) within three hours to save them.