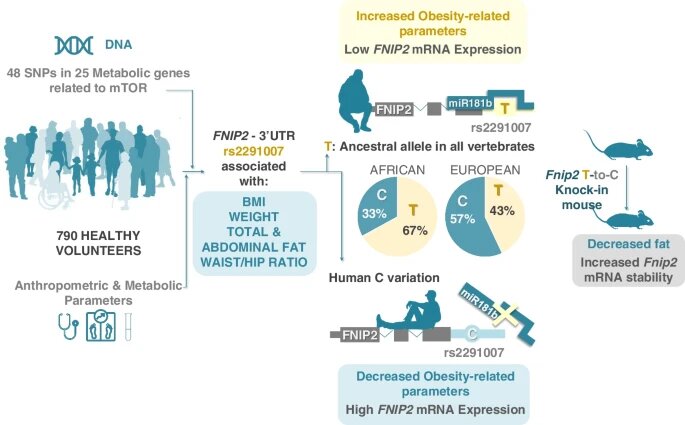 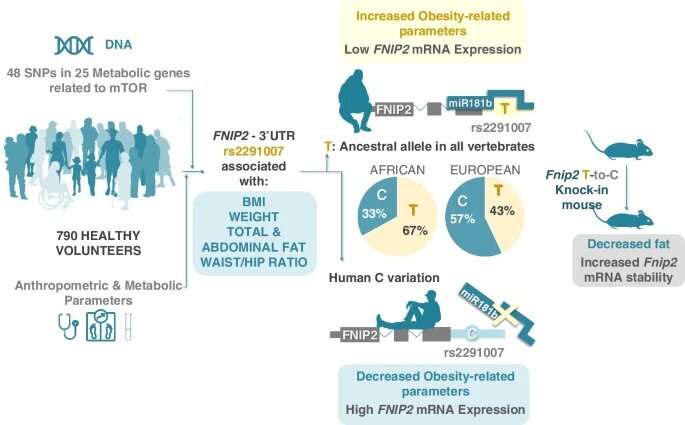 How much do genes influence our body weight? For the general population this influence is around 20%, according to studies that in recent years have analyzed the complete genome of tens of thousands of people. In other words, “lifestyle, such as eating habits and exercise, have a great impact, but genetic factors also exert an influence,” explains researcher Nerea Deleyto-Seldas from the Spanish National Cancer Research Centre (CNIO).

Some of these genetic factors are already known. Nearly a hundred genetic variants have already been identified that moderately increase the probability of having a high Body Mass Index (BMI), a common indicator of being overweight or suffering from obesity. CNIO and IMDEA Food researchers have just identified a new one. Their work is published in the journal Genome Biology, with Nerea Deleyto-Seldas (CNIO) and Lara P. Fernandez, from the IMDEA Food Institute, as first co-authors.

Variants of a gene are slightly different versions of that gene, which often do not result in visible changes in the body. But this time, they do. This variant affects the amount of fat the body stores, and the authors of the new study show that it is particularly prevalent in Europe. It is estimated to be present in almost 60% of the European population.

For Alejo Efeyan, head of the CNIO’s Metabolism and Cell Signaling Group, “the finding is another step forward in the understanding of the genetic components of obesity.” Ana Ramirez de Molina, director of the IMDEA Food Institute, believes that “knowledge of the involvement of the cellular nutrient-sensing pathway in obesity may have implications for the development and application of personalized strategies in the prevention and treatment of obesity.”

Genetics and body measurements of 790 volunteers

Overweight and obesity are defined by an abnormal or excessive accumulation of fat that affects health. To search for genetic variants that influence the phenomenon, and the associated metabolic alterations, a team from IMDEA Food collected genetic material and data such as weight, BMI, total and visceral fat, muscle mass, waist and hip circumferences, among others, from 790 healthy volunteers.

The researchers teams analyzed the possible associations of these parameters with 48 specific genetic variants, selected for their possible functional relevance. They detected a “significant correlation between one of these variants in the FNIP2 gene and many of these obesity-related parameters,” explains the study.

The team then studied the effect of this variant in mice, which had previously been genetically modified to express it. “We found that mice with this variant, which in people is associated with having a slim build, have between 10% and 15% less fat than their non-carrier counterparts,” explains Efeyan.

In humans, the effect of this variant cannot be isolated from that of the many other genetic and environmental variables that influence physique, so it is impossible to estimate precisely the strength of its effect. But given that the influence of genetics on obesity does not exceed 20%, the contribution of the variant now identified is necessarily small.

For this reason, researchers use terms like predisposition or tendency: “It is not at all the case that people with this genetic variant can overeat without getting fat,” Efeyan clarifies.

The animals genetically modified for this study showed no other alterations or differences. “This result is very striking, because many of these studies tend to be limited to reporting associations; in this paper we show that a single letter change in the entire mouse genome is enough to replicate what we observed in the human variant,” Efeyan continues.

Related to what the cell ‘eats’

The significance of the variant detected is that it is associated with the biochemical signaling pathway that tells the cell what nutrients are available to it. Why a small genetic change affects the tendency to be slim now needs to be studied.

The goal for the future is to “better understand the molecular basis of what this genetic variant does, i.e. what is happening biochemically to the cell,” adds Nerea Deleyto. “We need to improve the genetic tools to dissect when the functional consequences of this variant become important in the organism, for example, during the fat formation process,” she stresses.

The finding also raises questions for other areas of science, such as what evolutionary pressures favored the selection of this variant and when it occurred.