Some doctors are still dismissing women’s pain, making it difficult for those suffering from side effects caused by contraception to be properly diagnosed. 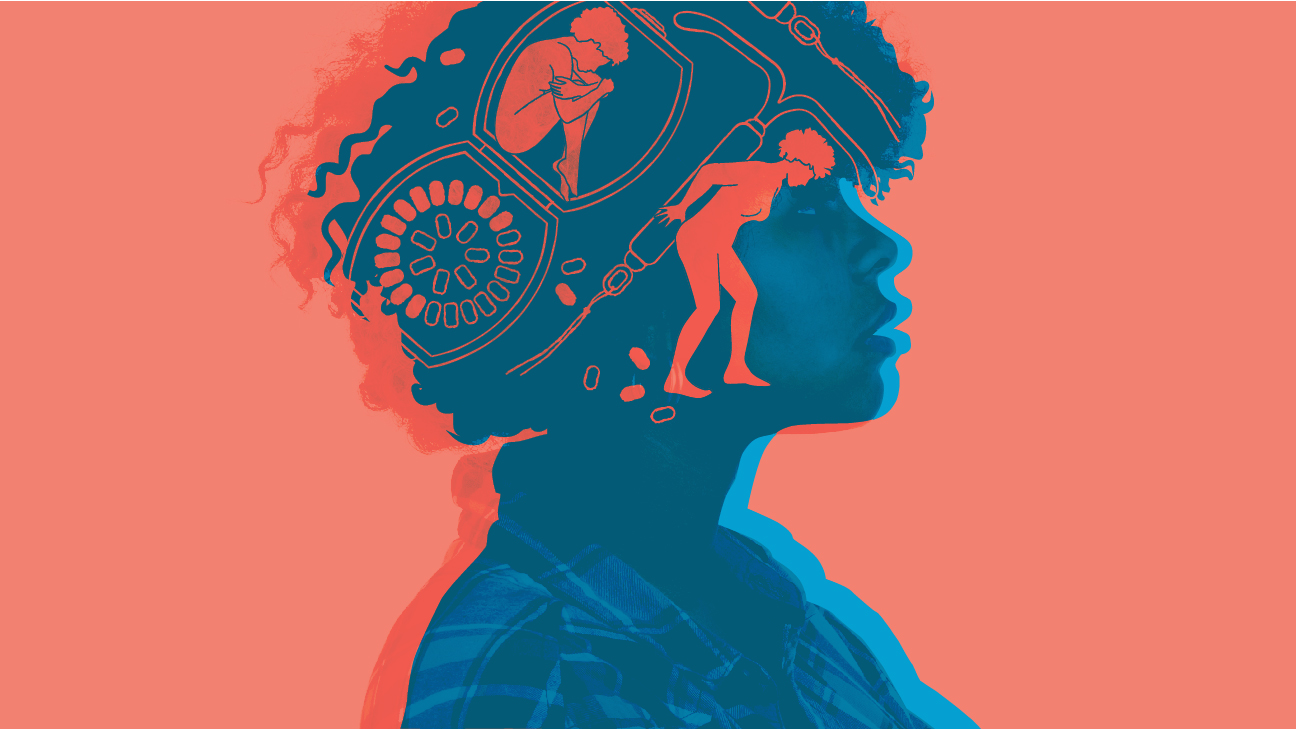 On a late summer afternoon three years ago, I was on my way home after a relaxing day at the beach with a friend when something frightening happened: I suddenly couldn’t breathe. My heart also began beating rapidly and my right arm went numb.

The episode passed, but I was worried. I was in perfect health as far as I knew. I immediately made an appointment with my family doctor. When she couldn’t determine a cause for the symptoms I described, she asked if anything had recently changed in my life.

I mentioned I had an intrauterine device (IUD) fitted a few months ago, believing it was my best option for long-term birth control. I told her I’d also noticed some lower back and abdominal pain since then. I asked if the IUD could be causing my discomfort and wondered if it might be responsible for my recent heart palpitations too.

My doctor was dismissive. “The IUD is localized in your uterus,” she explained. “So, I highly doubt it would be affecting your heart.”

After determining my back and abdominal pain were my body’s way of welcoming me to life in my 30s, she sent me on my way, assuring me I had nothing to worry about.

Over the next couple of years, I experienced a constellation of symptoms that came and went with varying degrees of severity. These included a deep radiating pain in my left leg that made it difficult to stand for long periods of time, a tingling sensation in my hands and feet, and even occasional vertigo. I also noticed a creeping nervousness that began to accompany me everywhere.

I sought additional opinions. I was convinced all these symptoms were somehow connected to my IUD. Yet, every doctor I saw assured me any link between what I was experiencing and the contraceptive I’d chosen was all in my head.

Frustrated with doctors who dismissed my concerns, I began my own research and soon discovered I wasn’t the only woman experiencing such side effects. Others were sharing their stories, including director Sindha Agha, who began suffering physical problems after being fitted with an IUD.

In her short film “Birth Control Your Own Adventure,” Agha chronicles her experience navigating the healthcare system as she struggles to find relief. On her journey, she discovers that, indeed, the progesterone-only IUD has been known to cause a wide range of side effects, including psychosis in some women.

The film provides an alarming look at the cavalier attitude some in the medical community have adopted regarding the potential debilitating side effects from different types of birth control. It also sheds light on the normalization of women’s pain which often leads to the mistreatment of their symptoms.

(Watch the short film below.)

The medical establishment has a long history of undermining women’s experiences. In the days of ancient Greece, the uterus was believed to be a living creature that rendered women insane. Centuries later in the early 1900s, doctors viewed women as slaves to their fluctuating hormones, often dismissing many symptoms as hysteria.

While hysteria is no longer an official diagnosis, women are still struggling to shake sexist stereotypes when it comes to their health. Recent studies have shown younger women were less likely than men to seek medical attention when exhibiting symptoms of a heart attack, fearing they’d be seen as hypochondriacs. Additional data showed that less than one in five medical providers failed to recognize the symptoms of heart disease in women, which can differ drastically in men.

Women’s health expert, author, and cardiologist, Dr. Nieca Goldberg explains that sexist stereotypes still exist in the world of medicine. This can lead to the dismissal of women’s pain, which can — in some cases — result in life-threatening consequences.

“I think that advancements in women’s health, like our understanding of how heart disease presents itself in women, are relatively new,” explains Goldberg. “The areas of the medical field that focused on women were primarily related to pregnancy, childbirth, and also preventing pregnancy, which of course includes birth control.”

Goldberg says the medical community is learning there’s a greater range of ways in which female bodies differ from their male counterparts than previously thought.

“Women are more likely to be susceptible to certain conditions, such as fatigue and nonspecific joint pain. It’s easy to say they’re just depressed or didn’t get enough sleep, but they very well might have an underlying medical issue, or autoimmune disease.”

The side effects of hormonal birth control didn’t receive widespread attention until the mid-1960s, about a decade after the initial trials were carried out on a population of impoverished women in Puerto Rico.

Activist and writer Barbara Seaman discussed at length both the physical and mental side effects in her book, “The Doctor’s Case Against the Pill.”

Seaman’s work was celebrated for legitimizing what many women had been experiencing for years, but due to lack of transparency from drug companies — in combination with deeply ingrained sexism — their symptoms were often considered psychosomatic. Seaman played a major role in the Congressional hearings that led to drug companies being forced to include warning labels with birth control.

Over the 50 years since hormonal birth control was officially released to the public, numerous studies have linked it to depression. More recent research has started examining the potential connection between its use and the rise in autoimmune diseases, as 80 percent of sufferers are women.

Yet, every study that provides some evidence validating women’s experiences are often accompanied by numerous attempts to undermine them. A cycle that has been going on for decades.

In her book “Sweetening the Pill,” women’s health advocate and writer Holly Grigg-Spall highlights the backlash women face when attempting to voice their health concerns.

“Women who speak out about their issues with birth control are often made to feel as if they are not appreciative of having the privilege of choice to take control of their fertility,” she says.

Grigg-Spall also emphasizes the various incentives that may cause doctors to either be unaware or downplay reported negative side effects.

“In the U.K., for example, there was an incentive to present the IUD as the first best choice for contraception,” explains Grigg-Spall. “When women present side effects, they may not get the help they need, as a doctor doesn’t see anything wrong with a perfectly healthy woman taking a medication that is common and effective.”

Planned Parenthood reported a 900% increase in women getting an IUD in 2016, reflecting the rapid growth of a movement known as IUD evangelism, which has eclipsed the dark history of the Dalkon Shield — the intrauterine device popular in the 1970s that famously injured over 200,000 women.

Despite these obstacles, our understanding of the effects birth control may have on a woman’s overall quality of life continues to evolve.

Dr. Angelica Lindén Hirschberg, professor and women’s health expert from the Karolinska Institute in Stockholm, Sweden, was one of the leading team members who conducted a study last year that found oral contraceptives reduce general well-being.

“Our study showed significant changes in some aspects of sexuality, including reduced desire, arousal, and pleasure in comparison with placebo, which indicate a causal effect,” Hirschberg says. “Furthermore, we found a significant reduction in general well-being in comparison with placebo. In particular, reduced positive well-being, self-control, and vitality. We believe that these results are of great importance since the young women were all healthy, and birth control is not treatment for any disease.”

Studies like Hirschberg’s are proof we’re making progress, and we can fuel that progress to greater heights by raising our voices and sharing our stories.

This is something director Sindha Agha knows well. After the release of “Birth Control Your Own Adventure,” she received an overwhelming response from women, many thanking her for sharing her experience.

“The comments just came pouring in,” she says, “and it wasn’t just from women who are young, but also older women saying that my work made them feel heard.”

I am one of the women who is grateful for Agha’s video. It helped me realize I was not alone after my own adventure with birth control came to an end. After years of seemingly-random symptoms, I decided to have my IUD removed. The frequent pain in my leg disappeared almost immediately, and the regular heart palpitations I was experiencing soon stopped as well. However, the side effects left my body in a state of shock, and I am still recovering some eight months later.

Thankfully, I have found a doctor who is listening to me and we’re working to treat the symptoms I’m still experiencing.

Women are redefining what has long been considered normal thanks to the growing number of activists, authors, and artists speaking out about how their pain was continually dismissed by doctors, only to be diagnosed with a serious condition years later.

If we are going to progress, it’s important we face the dark places that have defined women’s freedom, in particular the complicated history of contraception.

“It was heartbreaking to realize that in many ways we still have to be our own detectives, our own advocates, and sometimes even our own doctors,” Agha says, recalling her realization after the release of her film. “So often we are made to feel like the female body is some crazy mystery that we don’t understand, when actually a lot of these hormonal conditions and diseases that we experience are really common. But since they are not adequately addressed or taken seriously, so many women continue to feel isolated, because we are told it’s all in our heads, but it’s not.”

Though experiences like Agha’s and my own reflect a small percentage of women who’ve chosen to use hormonal birth control, they do occur nonetheless. Not all treatments are appropriate for everyone, and women should be made aware of all potential side effects before they decide which option for contraception is right for them.