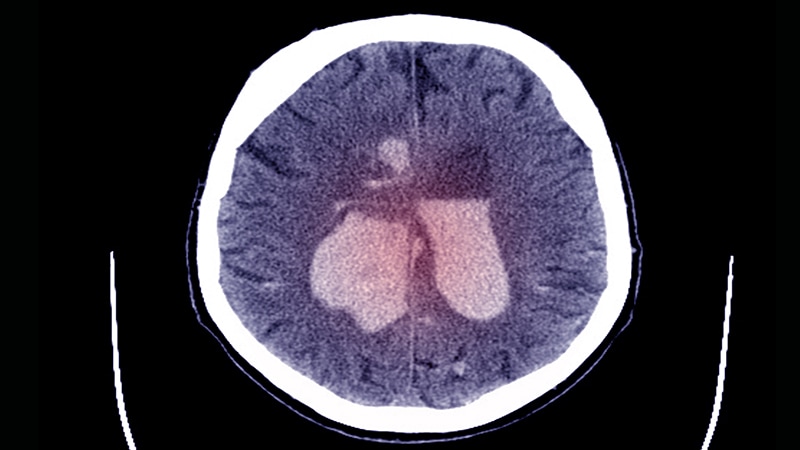 While endovascular therapy is now well established to be of benefit in patients with occlusion of a large cerebral vessel and a small or moderate infarct area of the brain, a new study suggests that this treatment could also be effective for patients with strokes that have caused a larger area of ischemic damage.

The RESCUE-JAPAN LIMIT trial was presented today at the International Stroke Conference (ISC) 2022 by Shinichi Yoshimura, MD, Hyogo College of Medicine, Nishinomiya, Japan. The study was also published online in The New England Journal of Medicine to coincide with its presentation at the ISC meeting.

The trial showed that among patients with acute stroke and a large ischemic brain region, functional outcomes at 90 days were better with endovascular therapy and medical care than with medical care alone.

Patients who received endovascular therapy were more than twice as likely to have a good functional outcome, defined as a modified Rankin scale (mRS) score of 0-3 at 90 days, than those who received medical care alone.

While the rate of intracranial hemorrhage (ICH) increased with endovascular therapy, authors of the study and outside commentators suggested that the benefit appeared to outweigh the risk.

Commenting on the study at an ISC press conference, Tudor Jovin, MD, chair of neurology at Cooper University Hospital, Cherry Hill, New Jersey, said: “The question of strokes with a large core stroke being an exclusion criteria for endovascular therapy is arguably one of the hottest topics the field is facing at this time. There are several randomized trials ongoing aiming to answer this question.

“The RESCUE-JAPAN trial is the first of these trials to report and shed some light on this issue,” Jovin added. “The results appear to show that these patients with large core infarcts have just as much benefit from endovascular therapy as patients with smaller infarcts.”

Jovin described these findings as encouraging but also surprising.

“When these large core randomized trials were planned, there was a belief that there would be benefit at some level. But what is surprising to me is that in this trial the benefit was similar to that seen in trials in patients with moderate or small core infarcts. This begs the question of whether we should care about the size of the infarct when we are considering taking these patients for thrombectomy,” he said.

On whether this will change practice, Jovin cautioned that this was just one study with a relatively small number of patients. “I think it is important that all the other randomized trials ongoing should continue so that we have a definitive answer to this question,” he said.

In his presentation, Yoshimura explained that current guidelines recommended endovascular therapy for patients with large cerebral vessel occlusion and a small or moderate infarct size — an ASPECTS score (Alberta Stroke Program Early Computed Tomographic Score) of 6 or higher. The ASPECTS score has a scale of 1-10, with lower values indicating larger infarction.

The RESCUE-JAPAN LIMIT study included 203 patients with occlusion of large cerebral vessels and sizable strokes on imaging, as indicated by an ASPECTS score of 3 to 5.

Patients were randomly assigned to receive endovascular therapy with medical care (endovascular-therapy group) or medical therapy alone (medical-care group) within 6 hours after they were last known to be well or within 24 hours if there was no early change on fluid-attenuated inversion recovery images indicating that the infarction was recent.

Secondary outcomes were mRS scores of 0 to 2 and 0 to 1, an ordinal shift across the range of mRS scores toward a better outcome at 90 days, and an improvement of at least 8 points in the National Institutes of Health Stroke Scale (NIHSS) score (range, 0 to 42, with higher scores indicating greater deficit) at 48 hours.

They also note that there was a relatively low use of thrombolysis in the trial (27% to 29%), which may have altered the outcomes in both groups and disadvantaged the medical-care group. However, they add that most guidelines recommend against the use of thrombolysis when there is extensive ischemic change on imaging.

Commenting on the tradeoff between benefits and risks in the study, Jovin said the increase in ICH seen in the endovascular group was similar to that seen in other situations.

“This is not really any different from what is seen when giving tPA [tissue plasminogen activator] to stroke patients or when performing thrombectomy in small or moderate core strokes — we know that ICH is the price to pay,” he stated.

“While the increase in symptomatic ICH was nonsignificant, the trend is very clear, and I believe it is real,” Jovin said. “But I think what matters — and what matters to patients — is that there is a much higher chance of having a good outcome with endovascular therapy. I think most patients will accept the extra risk of ICH if there is an even higher chance of having a better neurological outcome. This is no different to the approach that we take when we treat patients with IV tPA.”

Jovin pointed out that the RESCUE-JAPAN study did not include the largest core infarcts (ASPECTS score 0-1), but he added that these very large core infarcts are quite rare — especially in patients in the early time window.

He concluded that the study provided important information but cautioned that, with just 200 patients, the findings needed confirmation from other randomized trials that are ongoing.

“We have picked off the low-lying fruit — the patients with small areas of infarcted brain. But perhaps most patients do not fit into this category and now we are seeing trials addressing these groups,” he said. “This initial study suggests that these patients with larger core infarcts can indeed still benefit from this therapy tremendously.”