Why is physical activity so good for us as we age? According to a novel new theory about exercise, evolution and aging, the answer lies, in part, in our ancestral need for grandparents.

The theory, called the “Active Grandparent Hypothesis” and detailed in a recent editorial in Proceedings of the National Academy of Sciences, suggests that in the early days of our species, hunter-gatherers who lived past their childbearing years could pitch in and provide extra sustenance and succour to their grandchildren, helping those descendants survive. The theory also makes the case that it was physical activity that helped hunter-gatherers survive long enough to become grandparents – an idea that has potential relevance for us today, because it may explain why exercise is good for us in the first place. 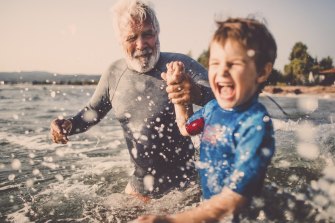 The hypothesis suggests that physical activity affects people in ways that may be unique to humans.Credit:iStock

Most of us probably think we already know why we should exercise. We have ample evidence that physical activity of almost any kind improves heart health, reduces the risks and severity of multiple diseases, and in many ways just makes us feel better.

Recently, he began to wonder why moving seems to have such a different impact on us compared to other primates. Studies by Lieberman and others have found that wild and captive apes typically walk for fewer than 3.2 kilometres a day, less than the average American adult, who walks about four kilometres a day, and far less than modern hunter-gatherers, such as the Hadza of Tanzania, who often cover 10 kilometres or more a day.

But despite this relative languor, apes rarely develop the kinds of disorders tied to inactivity in humans, such as heart disease, arthritis and diabetes. They manage to remain healthy without much activity, while we generally cannot.

On the other hand, we typically outlive apes and most other mammals. Hunter-gatherers, whose life spans are thought to mimic those of our forebears, often live well into their 70s (provided they survive early childhood). This is well past the age of childbearing, at least for women, which is unusual in nature.

A famous 1998 paper, also published in Proceedings of the National Academy of Sciences, proposed that women evolved to live well past menopause to help ensure that successive generations thrive. This idea, known as the Grandmother Theory and widely accepted by anthropologists today, describes how mothers provide food and care to their children and then, when their children have children, help to feed and care for those babies, ensuring the success of future generations.

But Lieberman and his colleagues felt the Grandmother Theory left some questions unanswered about what it was that allowed humans to live so long, compared with most other species. That’s where physical activity came in.

Early humans had to move around often to hunt for food, the thinking goes, and those who moved the most and found the most food were likeliest to survive. Over eons, this process led to the selection of genes that were optimised by plentiful physical activity. Physical activity likewise appears to jump-start various cell processes controlled by genes that help to promote health. In this way, evolution favoured the most active tribespeople, who tended to live the longest and could then step in to help with the grandchildren, furthering active families’ survival.

In other words, exercise is good for us, they point out in their new paper, because long ago, the youngest and most vulnerable humans needed grandparents, and those grandparents needed to be vigorous and mobile to help keep the grandkids nourished.

Crucially, the new Active Grandparents paper also delves into what it is about physical activity that makes it still so necessary for healthy ageing today. For one thing, moving around uses up energy that might otherwise be stored as fat, which, in excess, can contribute to diseases of modern living, such as Type 2 diabetes, Lieberman and his co-authors write.

Activity also sets off a cascade of effects that strengthen us. “Exercise is a kind of stress,” Lieberman told me. It slightly tears muscles and strains blood vessels and organs. In response, a large body of exercise science shows, our bodies initiate a variety of cellular mechanisms that fix the tears and strains and, in most cases, overbuild the affected parts.

“It’s as if you spill coffee on the floor, clean it up and your floor winds up cleaner than it was,” Lieberman said. This interior overreaction probably is especially important when we are older, he continued. Without exercise and the accompanying repairs, then, ageing human bodies work less well. We wear down. We cannot care for the grandkids.

Fundamentally, Lieberman said, lack of exercise during ageing explains why there is a difference between the human life span (how many years we live) and health span (how many of those years we remain in generally good health).

“They used to be the same thing,” Lieberman said. An inactive early human would not stay healthy and probably die early. Today, many of us can remain inactive and survive into old age, but the chances are that we will not remain fully healthy if we do. Our genetic inheritance and history as humans require exercise and movement, Lieberman said. “Retirement is not the time to slow down.”

This idea that we can, should and even must stay active as we age, thanks to human evolution, is at the heart of the Active Grandparent Hypothesis. Beguiling as the hypothesis is, however, it is just a theory and almost impossible to test.

And some experts question some of its assumptions. The Active Grandparent Hypothesis does not differentiate between men and women, said Kristen Hawkes, a distinguished professor of anthropology at the University of Utah who was the primary author of the Grandmother Theory.

The hypothesis suggests that physical activity affects people in ways that may be unique to humans. “But physical activity helps improve health span in other species, like mice,” said Michael Gurven, an anthropologist at the University of California, Santa Barbara, who studies biology and evolution and is working on a book about longevity in hunter-gatherers. Still, he said, “There’s no doubt habitual physical activity can improve health. I like how this paper doesn’t take that fact for granted, but instead focuses on the simple question: Why?”

The answer Lieberman and his co-authors settled on is worth keeping in mind as 2022 ripens and we add more months and years to our lives. “We’ve been selected” through evolution to be active, Lieberman said. And being physically active may help to ensure “the span of our good health matches the span of our lives.”

This article originally appeared in The New York Times.

Most Viewed in Lifestyle