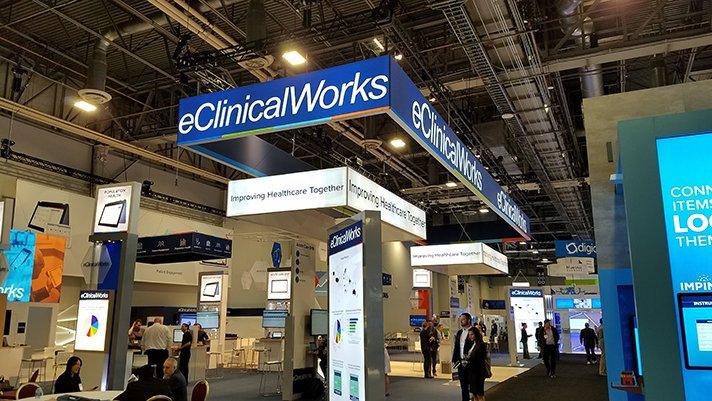 Nearly a year has passed since eClinicalWorks settled the $155 million False Claims lawsuit with the Department of Justice and a lot has happened for the EHR vendor in that time.

eClinicalWorks signed a handful of new customers up to its cloud-based services, detailed a new version of the product, added telehealth functionality to its Healow mobile app, and said it had strong quarters in terms of sales.

None of that is to suggest the year has been easy. Existing customers came out accusing the vendor of holding data hostage, the DoJ mandated that eClinicalWorks has to transfer data to rival EHRs if clients want to switch and eClinicalWorks has been charged in two class-action lawsuits including a $1 billion case claiming a patient died because of the faulty product.

By HIMSS18 in March, CEO Girish Navani shared a bold new vision for the next iteration of cloud services.

Here’s a look back at the past 12 months for eClinicalWorks.

April 3, 2018
Physicians Clinic of Iowa became the latest eClinicalWorks customer. CEO Michael Sundall said the multispeciality ditched Greenway and switched to V11 to streamline efficiencies by tapping into Eva, the eClinicalWorks virtual assistant that gives physicians a voice-activated way to interact with the EHR conversationally.

March 13, 2018
Fresh from HIMSS18, we reported that EHR vendors including  Allscripts, athenahealth, Cerner, eClinicalWorks and Epic all have big plans to incorporate artificial intelligence capabilities into EHR workflow, though each is taking a different tack.

March 7, 2018
At HIMSS18, Navani gave a glimpse of the next iteration of its electronic health record and related cloud services — the goal is to resemble a Bloomberg Terminal for healthcare with panels for telehealth, artificial intelligence, voice-based virtual assistant and population health.

January 19, 2018
While Navani said the forthcoming Bloomberg Terminal-like version will be unveiled at the company’s user group in October of 2018, during the lead-up to HIMSS18 he revealed what the company would display at the health IT conference in Vegas, a new cloud-based EHR and new offerings for inpatient settings with voice assistant, precision medicine and greater connectivity functionality.

January 4, 2018
eClinicalWorks was charged in a second class-action suit, this one alleging that the vendor engaged in deceptive practices that cost Carrollton Family Clinic money and also prevented from switching to a rival electronic health record vendor. An eClinicalWorks spokesperson said that the allegations are without merit.

November 17, 2017
The first class-action suit filed against eClinicalWorks was just a buck shy of $1 billion and alleged that software flaws prevented access to patient information that resulted in a person’s death.

October 13, 2017
Along with Cerner and athenahealth, eClinicalWorks responded to Epic CEO Judy Faulkner saying EHRs should be renamed Comprehensive Health Records by saying they already have been moving in that direction for two years by adding social determinants, population health and precision medicine features into their platforms.

October 10, 2017
eClinicalWorks stepped on board the Open Notes movement by equipping its portal with features that make it easier for physicians to share their notes with patients. Some 130,000 clinicians that use eClinicalWorks services could potentially participate.

July 28, 2017
Despite Healthcare IT News reaching out to him numerous times previously, Navani spoke with us for the first time since the settlement to discuss what the company has learned, changes it is planning to make, and we asked about holding clients patient data hostage. His message: This chapter has to be closed.

July 12, 2017
Research data emerged showing that healthcare pros, including clinicians, CIOs and CEO, had grown more suspicious of EHR vendors because of the eClinicalWorks case. But many were relieved when the Centers for Medicare and Medicaid Services publicly said it won’t punish eClinicalWorks customers for non-compliance with meaningful use measures.

July 10, 2017
The False Claims plot thickened when North Spokane Women’s Health told us on the record that eClinicalWorks was holding patient data hostage for a year and a half in what the client said was a nightmare battle scenario. Officials from eClinicalWorks countered that patients own their data. But a timely Black Book survey found eClinicalWorks customers “revealed very low confidence when they scored corporate leadership, mismanaged marketing and sales mischief.”

June 21, 2017
eClinicalWorks announced that it connected Eagle Physicians with Novant Health, Wake Forest Baptist and Cone Health, which use Epic’s EHR. That was two weeks after the EHR vendor enlisted a new federally-qualified health center, Ezras Choilim, as its latest new customer.

June 9, 2017
Injecting its Healow mobile app with new telehealth features, eClinicalWorks said physicians can now conduct virtual visits, and include those in the EHR, without going out to a third-party service.

June 2, 2017
We called Own C.J. Foster, the investigator listed on the DOJ settlement, to ask if hospitals should expect similar moves against other EHR makers and he couldn’t comment but a number of other legal experts said the DOJ is likely to probe more vendors for False Claims in the future. And, as EHR vendors became healthcare’s new villains, in November Epic was charged in an over-billing suit — though a judge threw that case out by February.

June 1, 2017
In the immediate aftermath of the False Claims settlement, a number of questions naturally arose. Since the DOJ mandated that eClinicalWorks must give clients their data if they want to switch vendors, an obvious query was other than Epic and Cerner, which EHR vendors would be a good fit? Another: What should hospitals concerned that the same thing could happen to them be doing right now as protection?

We asked Healthcare IT News readers what eClinicalWorks customers should do and they answered: Take their data and run.

May 31, 2017
D-Day. The DOJ announced to the world that eClinicalWorks had agreed to pay $155 million to resolve a False Claim Act lawsuit that included allegations of faking meaningful use certification and giving customers kickbacks for promoting its products.

And that’s where it all began.