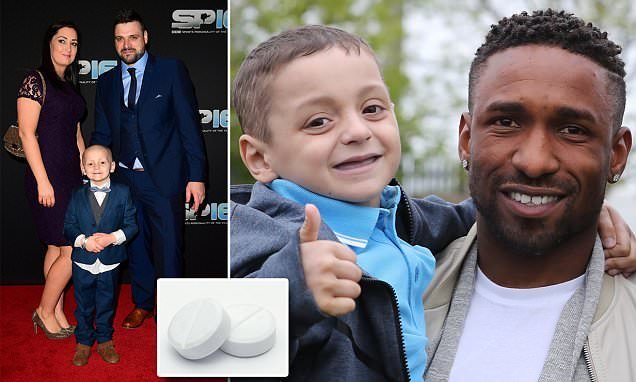 Children with the same childhood cancer that killed Bradley Lowery will be denied a life-extending drug on the NHS after the health watchdog ruled it too costly.

Nice stressed that it wanted to recommend patients with neuroblastoma are given dinutuximab beta – but argued it is too expensive and may not work.

Football mascot Bradley was robbed of his life, aged just six, from the childhood cancer, which strikes around 100 young people in the UK each year.

He earned the admiration of millions across the world during his widely publicised battle with neuroblastoma, before he eventually passed away last July.

But Nice today estimated dinutuximab beta – which charities claim can keep patients alive for longer – would cost the NHS between £62,300 and £79,900 per quality-adjusted life year gained. 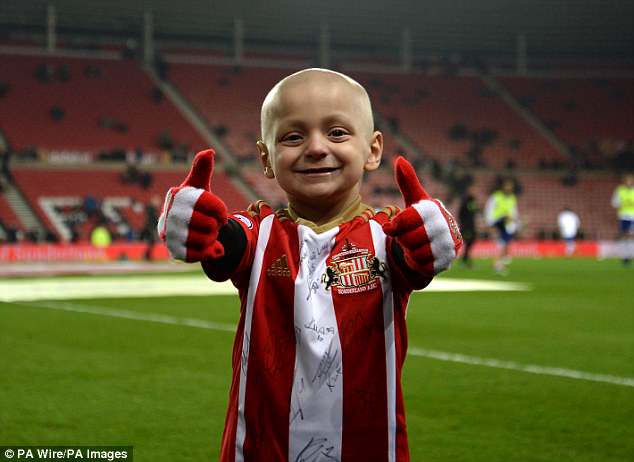 Football mascot Bradley Lowery was robbed of his life, aged just six, from the childhood cancer, which strikes around 100 young people in the UK each year 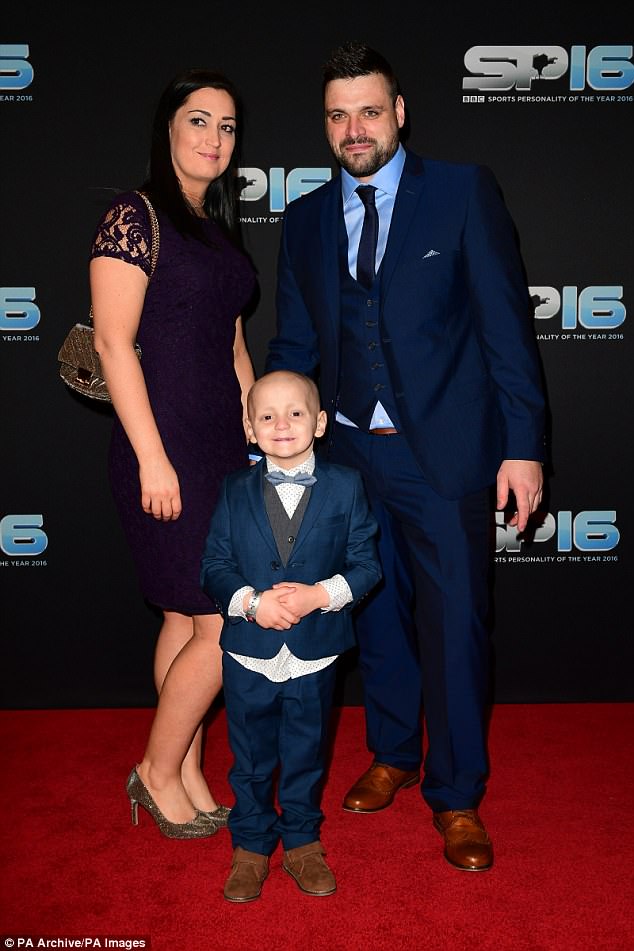 In his short life, the Sunderland fan raised more than £1million through his charity Bradley’s Fight (pictured with parents Gemma and Carl)

This is much higher than what is normally considered to be cost-effective for inclusion in the Cancer Drugs Fund, which is between £20,000 and £30,000 for the same measure.

Nice also warned that there remains ‘substantial uncertainty’ about the long-term benefits of dinutuximab beta, which is an anti-GD2 therapy.

It is a monoclonal antibody that recognises and attaches to the structures called GD2, which are present in high amounts in neuroblastoma cells.

Charities today condemned the decision and warned families will now have to try to raise thousands of pounds to send their children abroad for treatment.

Stephen Richards, chief executive of Solving Kids’ Cancer, said the drug is ‘recognised as standard of care by clinicians internationally’.

He added: ‘Anti-GD2 antibody therapy given at the end of standard therapy represents the best chance of long-term survival for children diagnosed with high-risk neuroblastoma.

Commenting on Nice’s draft guidance to recommend against the drug, announced today, he said: ‘This is devastating for families.

‘It takes away hope in the fight against high-risk neuroblastoma, and it’s immoral to deny children the chance of an essential treatment that could enable them to live longer or cancer-free. 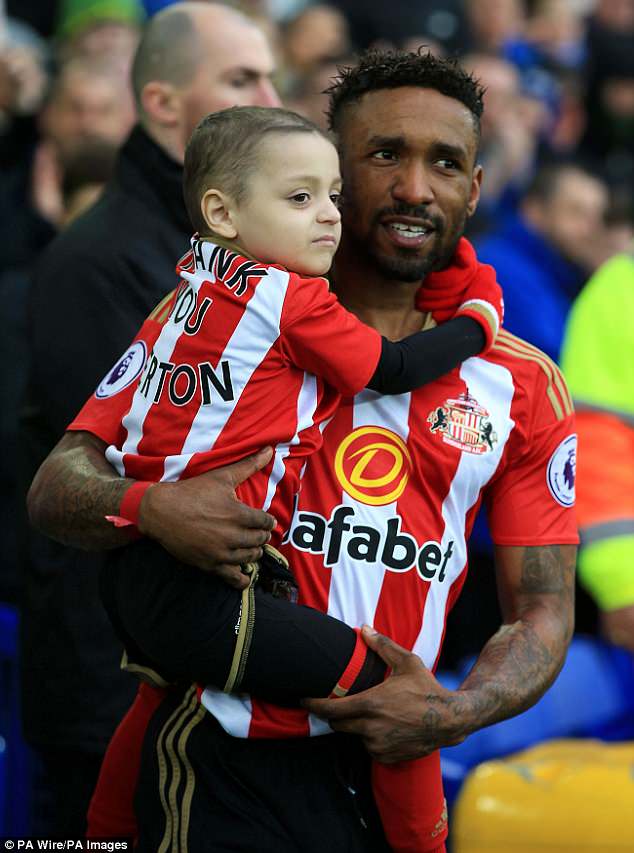 He earned the admiration of millions across the world during his widely publicised battle with neuroblastoma, before he passed away last July (pictured with his ‘best friend’ Jermain Defoe) 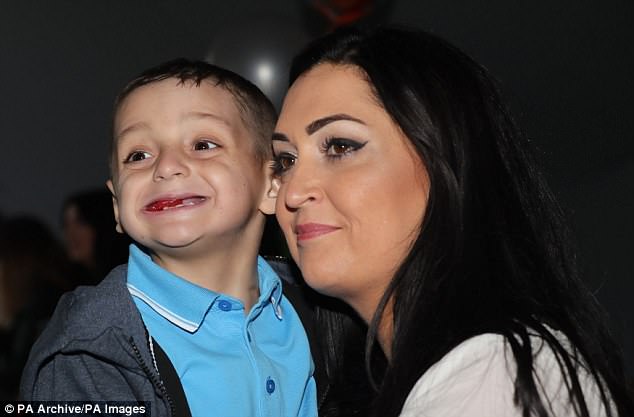 His bereft mother Gemma revealed on Bradley’s Facebook page that her son had died at 1.35pm on July 7, last year (pictured together before his death)

‘When we know that there is an effective drug available, it’s immensely frustrating for parents to be entangled within a system that leaves them no choice but to raise hundreds of thousands of pounds for their children to receive this treatment overseas.

‘Having the extreme pressure of fundraising plus the anxiety and logistics of travelling abroad for treatment puts an enormous emotional and practical strain on families.’

Mr Richards spoke on behalf of several charities, including Neuroblastoma UK, the Children’s Cancer and Leukaemia group, JACK, Hugs from Henry, Christopher’s Smile, Niamh’s Next Steps and Smile with Siddy.

His comments also represented the thoughts of The Bradley Lowery Foundation, which was set-up while Bradley was receiving gruelling treatment.

Meindert Boysen, director of the Nice Centre for Health Technology Evaluation, said: ‘Dinutuximab beta shows a lot of promise, but the evidence is uncertain and we must acknowledge this.

THE SUNDERLAND FAN WHO EARNED THE LOVE OF MILLIONS

The moving sound of applause rang out before the Bury v Sunderland match last July as thousands of fans paid tribute to six-year-old Bradley Lowery.

The schoolboy passed away in his parents’ arms after battling neuroblastoma, a rare form of childhood cancer.

In his short life, the Sunderland fan earned the love and admiration of millions worldwide and raised more than £1million through his charity Bradley’s Fight.

His bereft mother Gemma revealed on Bradley’s Facebook page that her son had died at 1.35pm on July 7. 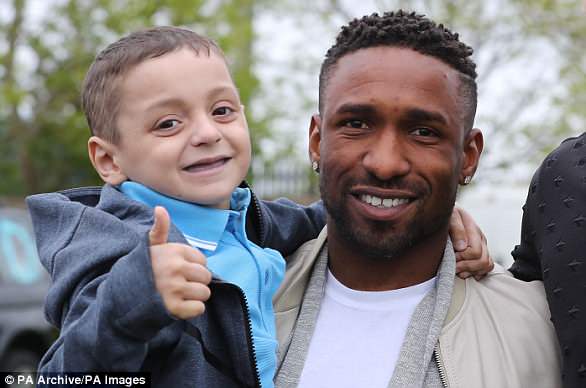 She wrote: ‘My brave boy has went with the angels today, in mammy and daddies arms surrounded by his family.

‘He was our little superhero and put the biggest fight up but he was needed else where.

‘There are no words to describe how heart broken we are. Thank you everyone for all your support and kind words. Sleep tight baby boy and fly high with them angels’.

His courageous spirit won him a legion of fans including football stars and celebrities alike.

He struck a close bond with England and former Sunderland striker Jermain Defoe, who called Bradley his ‘best mate’ and said he was ‘heartbroken’.

‘There is opportunity for the company to collect longer-term data from the ongoing trials. This could make dinutuximab beta a candidate for inclusion in the Cancer Drugs Fund.

‘However, the company needs to demonstrate that the drug has at least the potential to be cost-effective before we can consider recommending dinutuximab beta be included in the CDF.’

He continued: ‘As such, we are keen to work with the company and NHS England to help them explore options.’

Mr Richards added: ‘Nice has been directed to work within an appraisal route that is based entirely on complex health economics.

Neuroblastoma is a rare cancer that affects children and usually starts in the abdomen.

Around 100 children, who are typically under five, are diagnosed every year in the UK.

The disease affects approximately 700 new children annually in the US.

In around half of cases, neuroblastoma spreads to other parts of the body, particularly the liver and skin.

Neuroblastoma’s cause is unclear. There may be a family-history link.

The main symptom is usually a lump in the abdomen, which may cause swelling, discomfort or pain.

If the disease affects the spinal cord, it can lead to numbness, weakness and loss of movement in the lower part of the body.

Treatment depends on how advanced the cancer is and the risk it will return after therapy.

Surgery, and chemo and radiotherapy, are commonly used.

‘This doesn’t take into account the nature of the disease and any of the unique contexts, challenges and considerations that exist within rare children’s cancers.

‘Instead, a drug that saves the lives of some children and extends the lives of others has been appraised against metrics designed to evaluate treatments for chronic conditions affecting adults.

‘The system’s one-size fits all approach is simply not fit for purpose.

‘We owe it to these vulnerable children to give them the best chance of survival, and we will do everything in our power to keep fighting for these families.’

He said the decision leaves the UK lagging behind the United States and other European countries.

Neuroblastoma is the second most common form of cancer in childhood, affecting just under 100 children a year in the UK.

Over in the US, figures estimate there to be around 700 new cases of the disease in infants each year. Most are under the age of five.

Of these patients, around 70 per cent see their cancer spread around their body within just 18 months – where it becomes fatal, charities estimate.

Neuroblastoma develops from specialised nerve cells, called neuroblasts, which are left behind from a baby’s development in the womb.

The main aim of current treatment is to extend survival – and dinutuximab beta has been available through a clinical trial since 2009 for some NHS patients.

NICE made clear its draft recommendation was not intended to affect treatment with dinutuximab beta started in the NHS before the guidance was published.