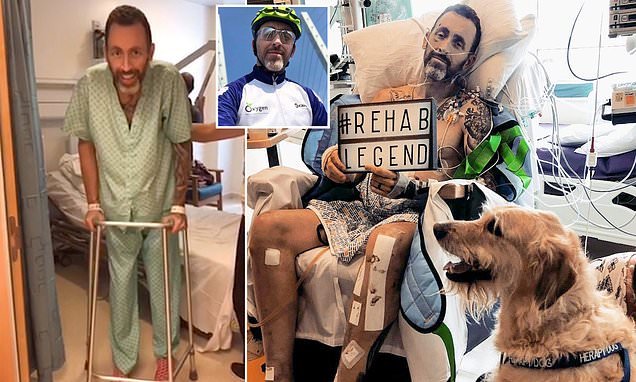 Cyclist, 37, who was ‘nearly killed’ in a horror hit and run near the finish of a 1,000 mile charity bike ride has learned to walk again – just ONE WEEK after leaving intensive care

A cyclist who was nearly killed in a horror hit and run near the finish line of a charity bike ride has learned to walk again one week after leaving intensive care.

Jean-Pierre De Villiers, 37, from Welton, Northamptonshire, was 800 miles into a 1,000 mile cycling challenge when he was knocked off his bike in Devon.

The car hit Mr De Villiers with such force he went over the car and got wedged in between a tree and the barrier at the side of the road with his bike shattered into pieces.

The driver fled the scene on May 22, and Mr De Villiers was found by a passer-by who heard his screams.

Mr De Villiers, originally from South Africa, suffered broken bones in both his legs, a fractured arm, a perforated bowel and a punctured lung.

He spent two weeks in hospital having various operations before his wife, Jules Cameron De Villiers, filmed him walking with the help of nurses and a walker.

Scroll down for video. 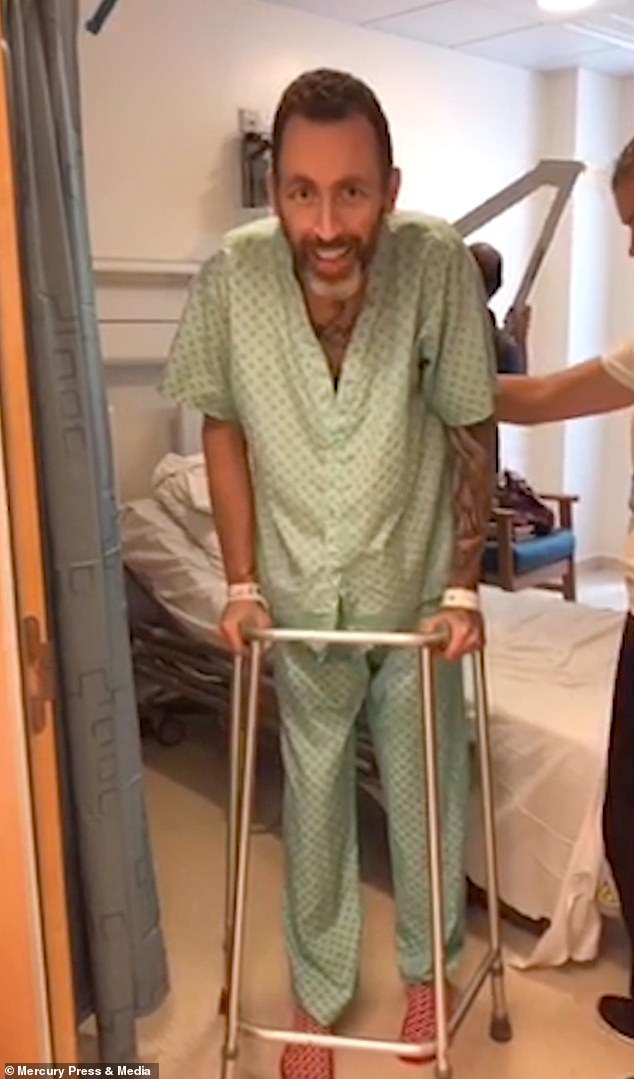 Jean-Pierre De Villiers was nearly killed in a horror hit and run near the finish line of a charity bike ride. He has learned to walk again just one week after leaving intensive care (pictured) 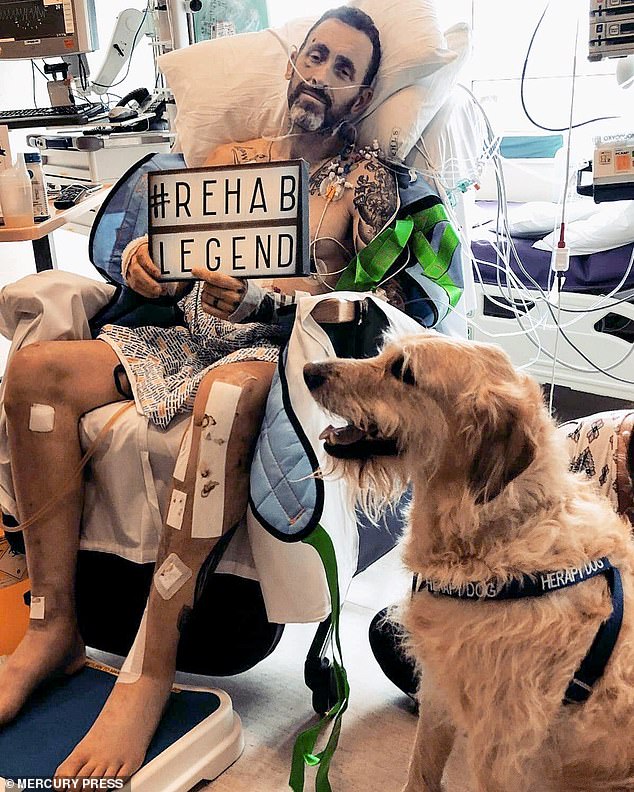 Mr De Villiers spent two weeks in hospital having various operations after the incident. Pictured with a therapy dog sitting up for the first time at the beginning of June 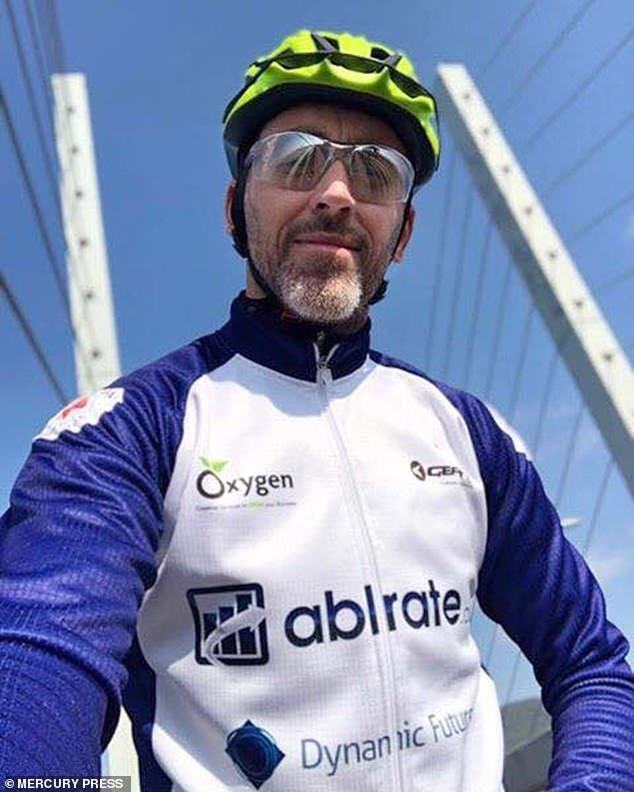 Mr De Villiers, 37, from Welton, Northamptonshire, was 800 miles into an 1,000 mile cycling challenge when he was knocked off his bike in North Devon 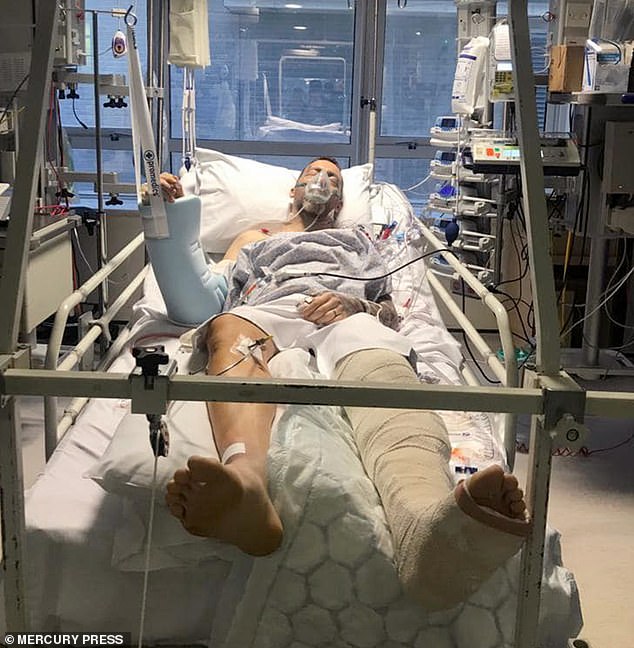 A paramedic and off duty police officer was the first to find Mr De Villiers, along with a member of the Royal National Lifeboat Institution who was able to provide oxygen.

His wife, Jules Cameron De Villiers said: ‘It was such a horrific thing to happen, but at the same time we can’t believe how lucky we were.

‘At first, I didn’t know if he was going to make it.

‘Doctors said if he wasn’t as fit as he was, he might not have and certainly if wasn’t wearing a helmet we would be telling a very different story.

‘The crash was so senseless, it was almost like it had happened on purpose.’

Mr De Villiers had been doing the cross-country cycling challenge from John O’Groats in Scotland to Land’s End in Cornwall.

He was two days from completing a fundraiser in honour of a friend’s daughter who died because of a brain tumour aged 16.

After the car hit him, another driver noticed a vehicle with a smashed windscreen driving towards her before spotting the smashed bike and hearing screams coming from the side of the road. 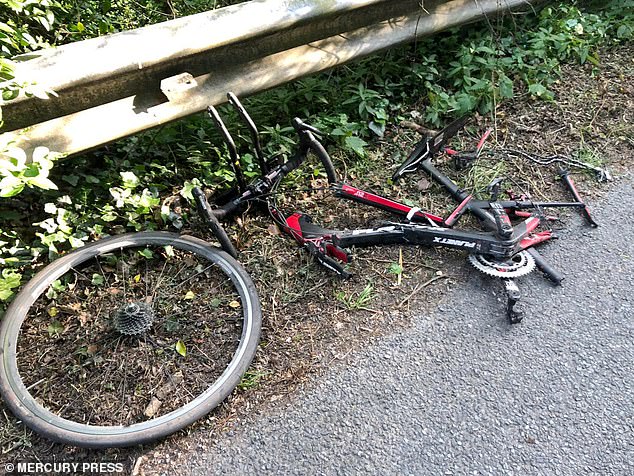 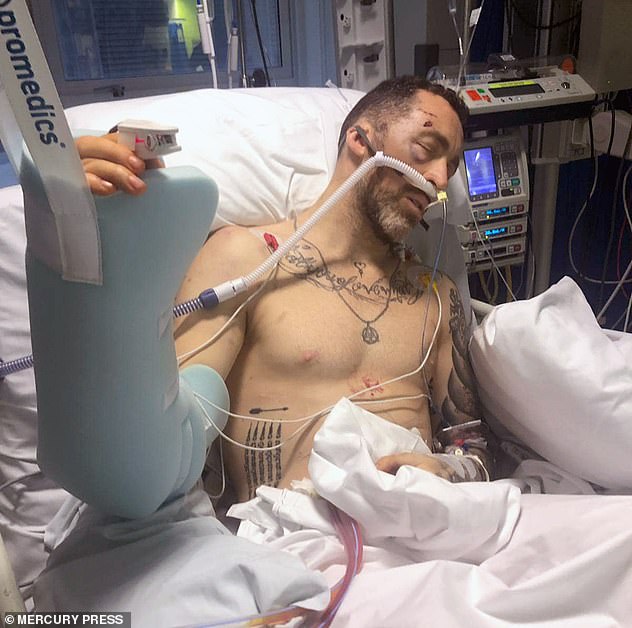 WHAT IS A PERFORATED BOWEL?

A bowel perforation is a hole in the wall of the small intestine or the colon.

It’s can be caused by accidents, non-cancerous diseases, a tumour that grows through the wall of the intestine or some chemotherapy treatments.

It needs to be treated straight away because it can be life-threatening.

Food, digestive juices, bacteria or stool can leak from the hole in the intestine, which could lead to an infection. This can cause a collection of pus.

Potentially, the infection can enter the blood and cause a widespread infection of the blood called septic shock, which can lead to sepsis.

Mr De Villiers, a motivational speaker and author, known as JP, was airlifted to Derriford Hospital in Plymouth with various life threatening injuries.

He broke his right femur (thigh bone), and the fibia and tibia in the lower half of his left leg.

Metal plates were inserted into his left tibia, a metal rod from his right hip down to his knee, and two metal plates in his right arm.

The multiple complex operations led Mr De Villiers to develop a chest infection which caused breathing problems as well as an irregular heartbeat.

Because he has punctured his bowel and has severe injury to his abdomen, it has been difficult for him to eat and he has lost weight while in hospital.

In immense pain, and weak from weight loss, Mr De Villiers has been learning to walk again with the help of physiotherapists.

He has since been transferred to a hospital in Coventry to be closer to his wife and two dogs, Bella and Zeus.

Mrs De Villiers said: ‘My husband is the kind of man who goes out of his way to do nice things. 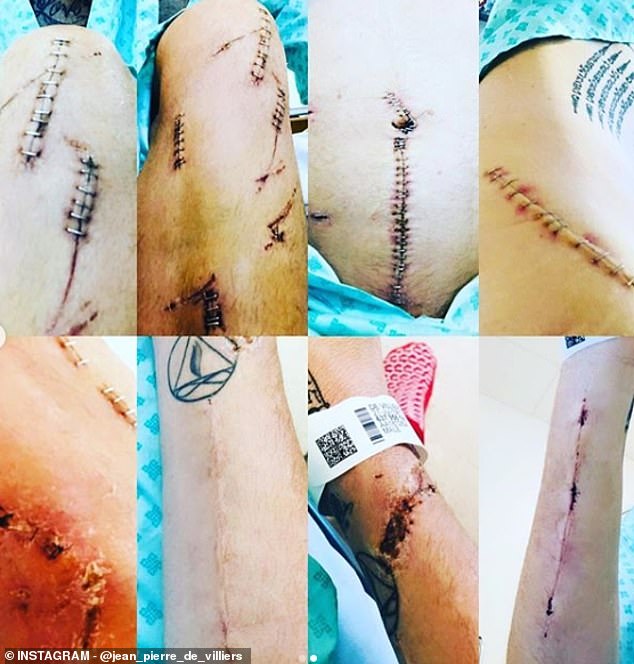 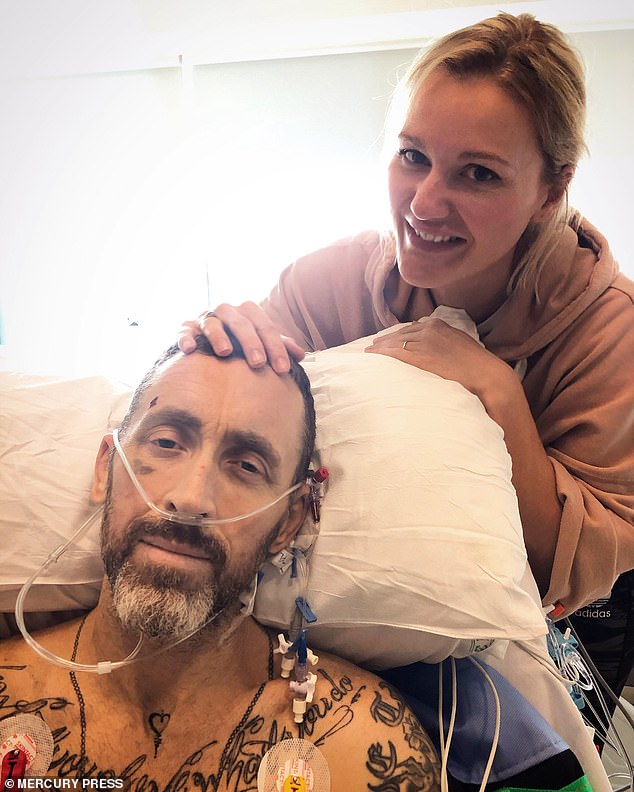 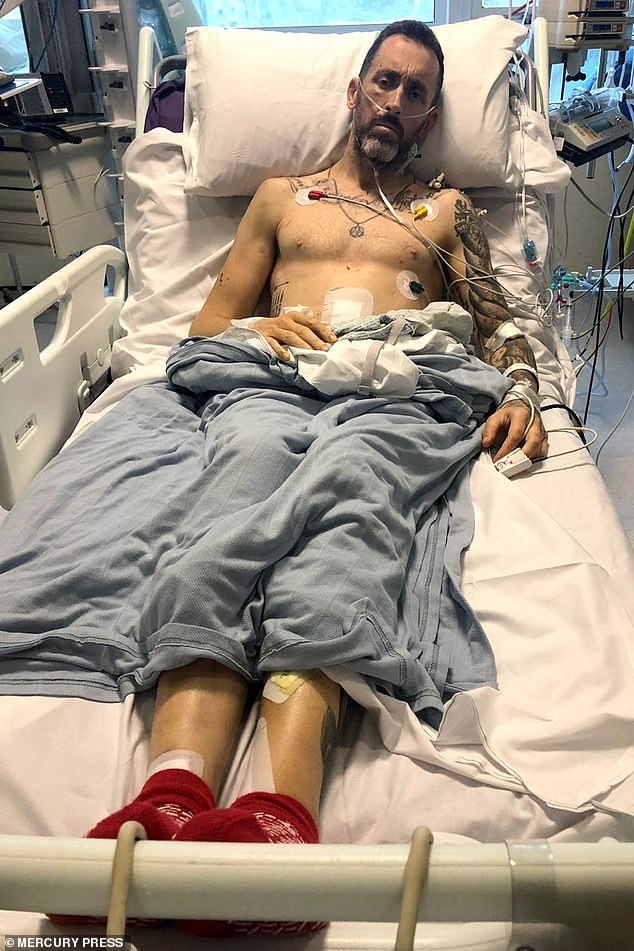 Things could have been a lot worse had Mr De Villiers not been wearing a helmet, doctors said 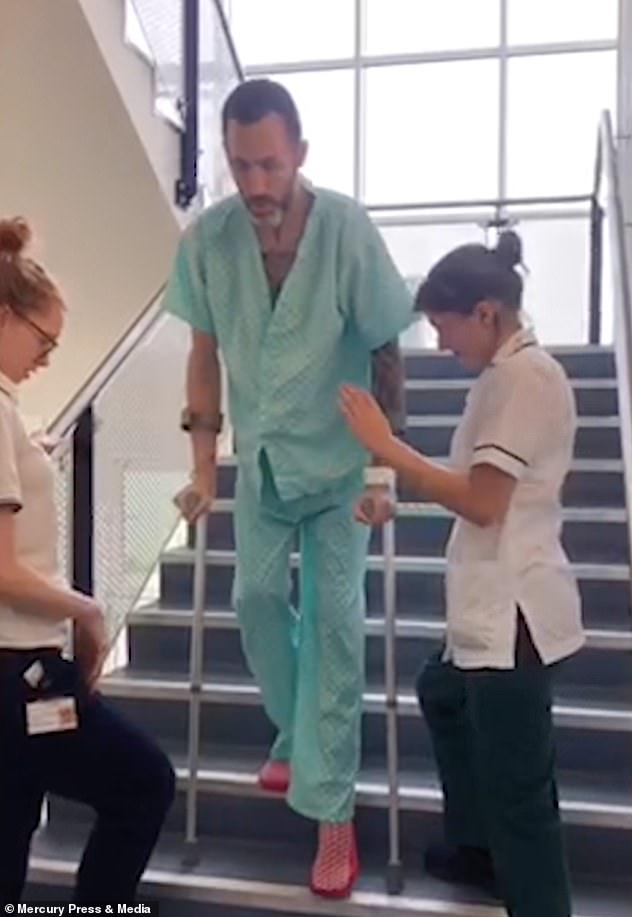 Mrs De Villiers filmed her husband walking (pictured) after he a two-week stint in intensive care. He is now in a hospital in Coventry to be closer to his wife and dogs

‘JP got such a big response on the fundraising page because he does so much work for charity and he’s always helping people.

‘I found a message on Facebook from a guy saying that during the cycling challenge, JP had stopped to help him fix his car when he broke down, that’s the kind of man he is.

‘He’s had thousands of messages, people telling me stories of how he has had a positive effect on them.’

His family and friends set up their own GoFundMe page for him to help with rehabilitation.

Mrs De Villiers said: ‘It’s been amazing to see his positive attitude but it’s also been hard because even getting out of bed is exhausting for him and he’s lost so much weight.

‘The first time he got up, he realised how long and hard it’s going to be learning to walk again.

‘But I have no doubt JP will use what’s happened to him as fuel to inspire even more people.’

Devon Police said a 69-year-old man from Ilfracombe was arrested on suspicion of dangerous driving, taking a vehicle without consent, driving while disqualified and driving whilst unfit.