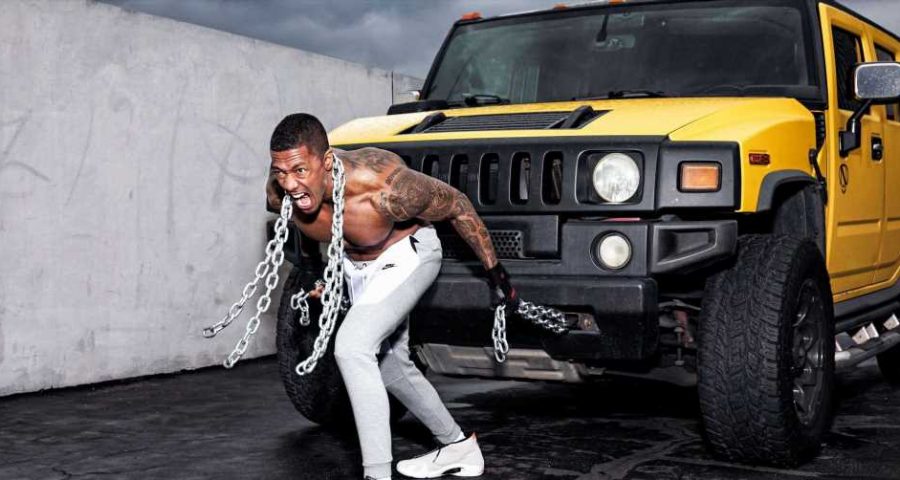 The only thing in front of him is a pile of cinder blocks, an empty parking lot, and a three-foot-high cinder-block wall. And for some reason, this has Nick Cannon grinning. He grabs
a pair of 30-pound concrete slabs, hoists them onto his shoulders, and starts lunging toward the wall. Once there, he stacks the blocks on the wall, then trudges back toward the pile. “This,” he says, “is great.”

The metaphor can’t go unacknowledged—and it was Cannon’s idea. To spice up his workouts, he bought more than 100 cinder blocks and made a small wall out of them in the parking lot at his Ncredible Studios office in Los Angeles. Every few days, he breaks it down, unstacking the blocks and rebuilding the wall in a new spot 30 feet away.

“It’s the mental side of training,” Cannon says. “You’re breaking a wall down, building it up.”

And it’s only one of many unorthodox moves that the 38-year-old host and producer of Fox’s sleeper hit The Masked Singer packs into his workout on this rain-splattered morning at the gym just outside his studio. This isn’t a normal workout. But by Cannon’s rationale, he’s spent his whole career working hard in Hollywood, so why not do it in the gym? It’s something he learned from Will Smith when he was the opening act for Smith’s concerts as a teenager.

Why Does Nick Cannon Train So Hard?

Cannon’s training reminds him of the effort he needs at the office—as well as what he’s capable of. Before his 90-minute grind is done, he’ll smack a tire with a 15-pound sledgehammer, do sets of upside-down pullups, and drag his 6,500-pound Hummer across the parking lot. “You pull that truck,” he says, “and you feel like you could move a mountain. I feel like a new human after a workout.”

Cannon’s dedication to his health (which includes a focused diet that you can check out in the video above) started when he was hospitalized while vacationing in Aspen in 2012. He was later diagnosed with lupus, an incurable autoimmune condition. That began a year of meds, chemotherapy, and a diet free of meat and processed foods. When he recovered, Cannon adopted the crack-of-dawn body blast. “I’m doing this to stay alive,” he says.

Working on his wall centers him. “It’s a meditation,” says his trainer Arron Sain. It can be monotonous, but it’s uncomplicated—a perfect foil to hosting The Masked Singer, recording and collaborating with artists under the title Ncredible Gang, and leading conversation on his YouTube show about college, Cannon’s Class.

He’s constantly running between projects on next to no sleep. “I don’t like to live by man’s clock,” he says. Unless the clock says 5:00 a.m., precisely when his daily workout begins. “Just knowing I’m out here getting it in, that makes me feel like I’m doing more than most,” he says. Then he hoists another block.

Bodyweight ab workouts take you only so far. That’s why Cannon chisels his core with weight-room moves. He ends most workouts with this ab crusher from trainer Arron Sain. “Weighted ab exercises provide resistance and aid in muscle growth,” says Sain.

Fix a rope attachment to a shoulder–height cable column. Kneel in front of it, grasping the rope so its handles are near your ears, torso still upright. Pull your elbows to your knees. Reverse the move. That’s 1 rep. Do 4 sets of 25. Rest 30 seconds between sets.

Sit on a bench with your legs hanging off one side and your torso off the other, a light dumbbell on the floor wedged between your feet. Hold the edges of the bench and lean back. Lift the dumbbell and pull your knees to your chest. Reverse the move. That’s 1 rep. Do 4 sets of 25.

Hang from a pull-up bar, legs straight, toes together. Raise your feet in a wide
arc to the right, then upward in front of your torso. Lower them in a wide arc to the left, then return to the start. That’s 1 rep. Do 4 sets of 12, alternating directions each rep.