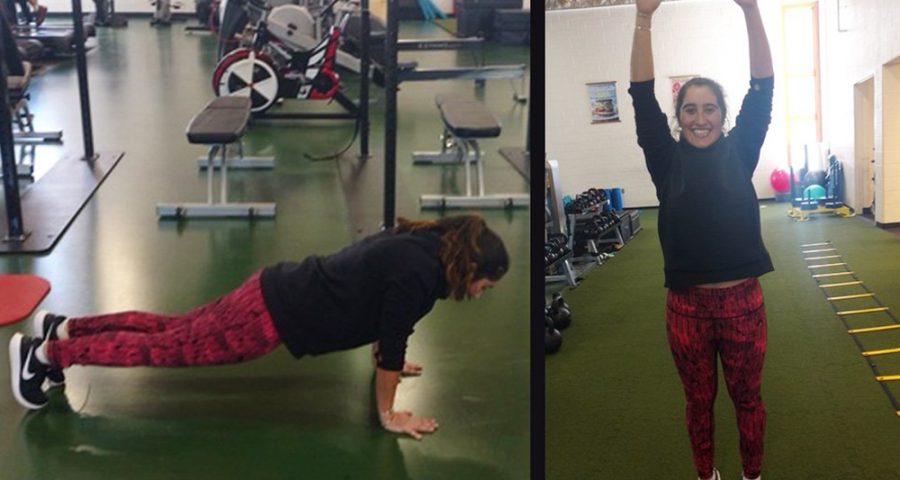 When I wanted to try CrossFit, I dragged one of my best friends to a beginner’s class with me. And although she was a good sport about it, she mentioned on our drive home how the deadlifts-crunches-burpees circuit would have been so much better had it been just deadlifts and crunches.

I was shocked. To me, the burpees were the best part. It was then that I realised not everyone is as crazy as I am—not everyone enjoys burpees. This got me thinking: What if I incorporated burpees into my daily routine?

I did some digging into the origin of the exercise, and I found out they were created in 1939 by a man named Royal H. Burpee to determine a person’s physical fitness. Back then, the move didn’t include a pushup in the middle or the jump at the end, but it was still dreaded.

First, I wanted to make sure my form was on point. I decided to do the modern burpee, not the old-school version from the 1930s.

I read some how-tos. To do a burpee, start from a standing position, then squat down and place your hands on the floor in front of you. Quickly kick both feet out behind you so you are in a pushup position, and then do one pushup. Next, bring your legs forward to go into a squatting position again, and jump up.

Yes, it’s an awkward, frog-like movement. But I knew it would be worth it to challenge myself.

I’ll admit I’m not great at sticking to things. I always have the best intentions, but when life starts to get busy, I’ve been known to make excuses here and there (I’m working on it, I swear). I was glad I had this story to hold me accountable as I set out to become a burpees beast.

So with my trusted 50 Cent Pandora station by my side, I got to work.

RELATED: I Took Squat Breaks At Work Every Day For A Month–This Is What Happened

Here’s what I did:

I completed three sets of 10 burpees for 15 days straight. I started out with a one-minute rest in between my sets and decreased that time by 15 seconds every three days until I was doing all 30 burpees at once with no rest for the last three days.

I wanted to stick to the same time every day—when I woke up at 7:30 a.m.—but that didn’t always work out. When I slept in, I’d do a circuit when I got home at around 4 p.m.

My typical easy pace is about nine minutes per mile, but towards the end of the 15 days, I started running faster without consciously ramping up my speed. My lungs felt clear and I coasted through miles.

I was also going longer. I’ll usually do a three-mile run on weekdays after work, but I found myself having the energy to do more.

On one of the last days, I ran five-and-a-half miles and felt awesome. My stride felt stronger, and my breathing was more even and composed. I wondered if this was merely psychological or if physical changes were actually happening.

So I called Dr. Jordan D. Metzl, a New York-based sports medicine physician at the Hospital for Special Surgery and host of Runner’s World’s IronStrength workout who believes burpees can cure (almost) anything. According to him, my progression was to be expected.

“Burpees target every muscle in your body and train your cardiopulmonary fitness by repeatedly bring your heart rate up and down,” he said.

Because my muscles and heart were getting an added workout, running felt like a breeze.

There are more days than I’d like to admit that I feel like a total zombie. I’ll stare at my computer screen wishing for words to come to me, only to give up and head to the cafeteria for some coffee.

But Metzl said that extreme exertion—i.e. burpees—release endorphins, which give us the boost we need to get through our day. In fact, endorphins that remain in your system can leave you feeling good even hours after your workout.

So starting my day with this kind of extreme physical exercise helped me feel more awake in the morning without having to rely on caffeine. My body (and my bank account) thanked me.

3. They got easier, but there were still days I felt like I was struggling.

Although I was doing all 30 burpees with no breaks in between, my progress wasn’t so linear. I didn’t understand why on day eight, for example, I felt like I was almost starting from scratch, and I really didn’t love the fact that it seemed like I was taking steps backwards. Shouldn’t I have been improving as time went on?

Metzl attributed this irregularity to two things: my body still getting used to the exercise, and any external factors like how much sleep I got the night before. In all honesty, I probably don’t get enough sleep, but that’s a whole other issue.

I was glad to have some sort of explanation for this, and a reason to adjust my terrible sleeping habits. But I do feel like it’s almost good that my body wasn’t totally acclimating. Each day felt like a new challenge.

RELATED: Working Out Just Twice A Week Could Save Your Life

Burpees are an intense workout. There’s a reason why military members and elite athletes use them to train. Knowing what I was doing for my body gave me a sense of strength that was more than physical. I felt mentally strong and ready to tackle my day.

I gave myself a rest when my two weeks were up, and even though the burpees only took up a few minutes of my day, I strangely felt like something was missing. I was so just so used to carving out that time. With that said, I don’t know that I’ll do burpees every day for the rest of my life. But it’s nice to know I can squeeze a mini-workout in, and I have continued to start some mornings jumping up and down, and getting stronger.