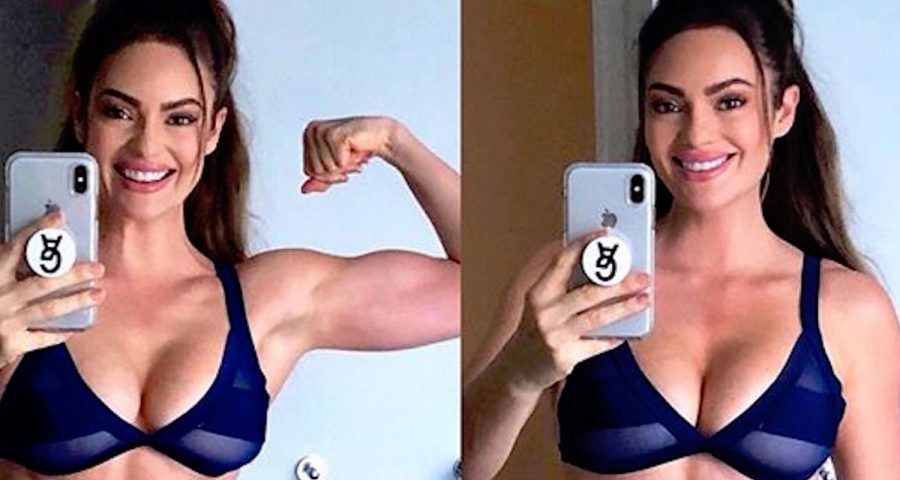 Instagram fitness star Emily Skye has shared with the world every step of her postpartum fitness journey—and her latest post celebrates how far she’s come five months after giving birth to her daughter, Mia.

The Australian trainer revealed in the caption that once her doctor told her it was okay to start exercising, she felt “slow and sluggish,” and still has to remember to engage her core when she stands and walks around. “It just wants to come ‘out’ all the time,” she said about her tummy.

She said she’s done her own FIT Program five times a week after her daughter goes to sleep, and still takes time to eat what she wants. “I’m feeling pretty proud of myself because I have worked really hard but I’ve been really balanced too,” she wrote.

5 months postpartum progress! ?? . It was hard to notice changes until I looked back to where I started. I’m feeling pretty proud of myself because I have worked really hard but I’ve been really balanced too. I’m not strict, still enjoy life (and treats) and I don’t spend much time away from Mia. ??? The hardest part was the start when I first got the all clear to begin exercising at 6 weeks PP. I felt so slow & sluggish but I worked on it by doing my FIT Program about 5 times a week at midnight or so (after Mia finally went to sleep). I’m becoming fitter and stronger every day but I still have to be really conscious of holding my core tight when standing and walking around. It just wants to come “out” all the time. ?? It was pretty big when I was full term so it’s no wonder it takes time to return back to normal. I just have to keep working on training my muscles to hold everything tight, with good posture and get my core strong again. ??? – I’m getting there one day at a time! . Question for all the mums out there: How long did it take for your tummy to stop wanting to push/hang out? I know everyone is different but I’m just curious. ?? . .

Emily has been open about her fitness journey since giving birth, sharing progress pictures of herself at various stages postpartum. She’s also been just as candid about the “many hurdles” she’s faced, including her struggles with “the baby blues.”

After Mia’s birth, “I spent at least 10 days feeling really sad and crying constantly,” she told Women’s Health. “It wasn’t until I started doing some light workouts that I started to feel better after giving birth to Mia. It’s so amazing how good you can feel after moving your body and getting the blood flowing again.”

I’ve had the baby blues, illness, injury, tears, some excuses and a lot of sweat along the way but I’ve done the best I can without sacrificing my precious time with Mia and I’ve done it slowly and healthily. I was going to say I haven’t reached my goal yet but I guess I have because my goal is simply to improve myself which is what I’m working on each day! ? I’m proud of what my body can do and how far I’ve come! I’m feeling great and I’m feeling more like my old self but WAY better because I’m a mum to a beautiful little girl. ??? . Don’t ever doubt yourself – you can achieve it if you set your mind to it, work at it everyday and don’t let hurdles stop you. Remember to focus on your journey and celebrate small achievements along the way. Dont be too hard on yourself (my downfall ?) and definitely don’t compare yourself and your progress to others (also my downfall haha ? – but I’m working on it)! I’m off to LA tomorrow for some exciting things which I can’t wait to share with you.. but my nasty inner voice keeps telling me silly things like; I’m not ready, I’m not lean enough and I’m not good enough bla bla bla… I’ve told that voice to shut up as it doesn’t serve me in the slightest! I am good enough, I look and feel great, I’ve done the best I can and I deserve everything I’ve achieved so far and everything I’m working towards. ☺️ I’m choosing to OWN IT! ??? . . @BabyMiaElise . #EmilySkye #BabyMiaElise #3WeeksPoatpartum #4MonthsPostpartum #fitmum

And amongst the fitspo posts, she’s also shared powerful motivation to her 2.4 million followers who are on their own fitness journeys. “Don’t ever doubt yourself or allow other people’s doubts and negativity affect you,” she wrote. “You can do anything if you want it bad enough and commit yourself to it.”

Physically speaking I will never be the same (which isn’t a bad thing) and I’m making the most of what I’ve got. I’ve still got loose skin on my belly but my abs are beginning to make a comeback – which shows me that what I’m doing is working (following my FIT Program)! . Some people misunderstand my reasons for living a fit and active lifestyle and think it’s “selfish” because I’m now a mum. Being fit, strong and healthy is important to me mainly because of how it makes me feel. And if I feel good I’m happy, and I’m a much better mum to my daughter Mia and a better partner to my man Dec and so on. I also like being strong for myself because I like it and I love the look of a strong physique! My focus is always on being healthy but I like to look good too and there’s absolutely nothing wrong with wanting to look good!! I’m not sure why there seems to be a stigma attached to wanting to look good. As long as I’m not ever sacrificing my health to look a certain way and as long as it doesn’t negatively affect my family I don’t see anything wrong with it – in fact I see everything RIGHT with it! . Do what makes you happy regardless of what anyone else thinks – as long as it doesn’t directly hurt anybody. – These are words I live by and what I’ll instil in my daughter. The last thing I want is for her to live to please others (like I used to) – there is a difference between showing love and doing nice things for people and trying to constantly please others at the expense of your own happiness. . This lifestyle makes me happy so I’m going to keep living it and I encourage you to live a life that makes you happy too. ? . What makes you happy, and are you doing it? . . #2monthspostpartum #fitmum #emilyskye #postpartum