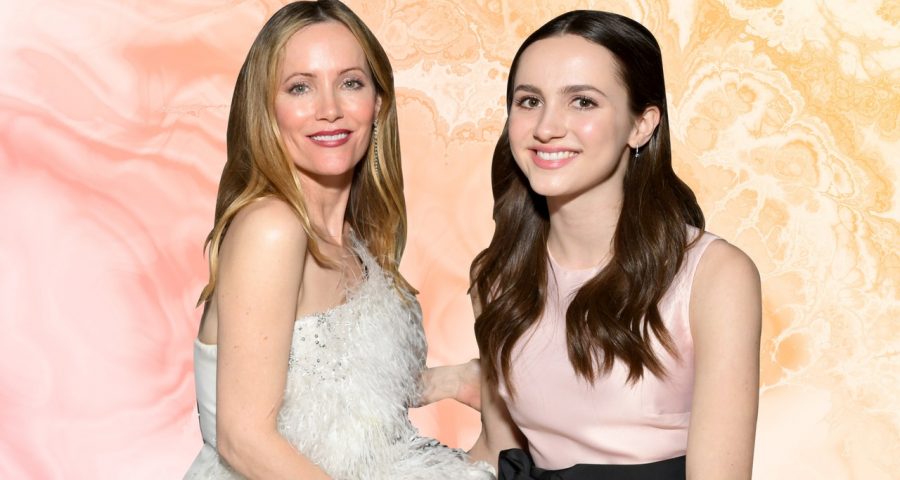 I've often thought to myself, if I were a mom, I'd want to be a Leslie Mann kinda mom. Of course, I can't know for sure what she's like as a mother, but it feels relatively safe to assume she's pretty awesome. The irrefutably hilarious actor has worked side-by-side with her daughters — also irrefutably hilarious — in projects directed by her husband, Judd Apatow, over the course of the last two decades, and with such apparent ease and enjoyment that you can't help but want to join this family.

One of my personal favorite family projects is Mann's Jergens commercials with older daughter, Maude Apatow. In little 15-to-30-second spots, we get a sense of Mann's enthusiasm for the brand's body products — which isn't really acting considering she's loved the Original Scent Cherry Almond Dry Skin Moisturizer since she can remember her grandmothers using it — as well as her tendency to give excellent, albeit unsolicited, product advice to Apatow.

But when I had the pleasure to chat with both mother and daughter over Zoom recently, I learned Mann herself was never really one to heed her own mother's beauty advice — especially when it comes to hair.

"She always wanted me to brush my hair, but she has straight hair, and I have curly hair. And so I would try to tell her that's not how it works with curly hair," Mann recalls. "You can't brush your hair, like, in the middle of the day. You have to brush it, let it dry a certain way, and then wrangle it somehow without a brush. And she could never understand it because she's a straight-hair person."

Refusing to brush was hardly the only way Mann rebelled against her mother's hair wishes. "She wanted me to have long hair — I think I was in sixth grade or seventh grade — and I really did not want it anymore," she tells me, pulling her hair into a hand-held ponytail and miming scissors. "And I took it like this and took scissors, and it was really thick, so I had to really dig in there. And then it came off, and it was really long on this side and really short on this side." Picture the most spectacularly asymmetrical bob ever — or as Apatow calls it, the Fleabag haircut.

"You said it was like a triangle," Apatow reminds her mom.

"And I don't think she would pay to have me get it fixed," Mann recalls.

"She let you suffer the consequences," laughs Apatow, who recently experimented with her own hair as well, dyeing it red. She quickly had to change it back to her usual golden brunette, however — but not at her mother's behest.

"I thought they were going to like it at work and they didn't, so I had to dye it back. The continuity was funky," says Apatow, who's filming the new season of Euphoria. Mann loved the red, though, and Apatow says Mom is supportive of her and sister Iris's beauty experimentation — with one exception. "So she's like, 'No tattoos ever, nothing permanent, but dye your hair or cut it however you want.'"

But Mann insists her no-tattoos rule is for a good reason. "I love tattoos, but the only reason I say that is because, as an actor, you have to wake up an hour earlier than you would normally have to to go sit in the makeup chair and have them covered up," she explains.

As someone with a tattoo sleeve and a proclivity for community theater, I can confirm, that's good advice. Turns out, just like in her Jergens commercials, Mann is actually full of good advice.

Mann's beloved advice is absent from Jergens's latest campaign for Mother's Day. Instead, it features an array of other real-life moms — all of whom became mothers in different ways — and their kids. And if those kids are anything like Maude and Iris, they'll end up giving advice right back to their moms.