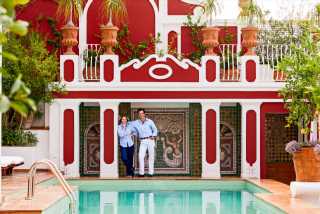 MILAN — Even through a screen, talking to Marina Sersale and Sebastián Alvarez Murena is an energizing experience.

The couple behind the beauty brand Eau d’Italie and fragrance label Altaia were all smiles throughout an hourlong Facetime call during which they shared anecdotes and reflected on the evolution of their businesses.

Their setting likely played a role in their upbeat mood, too: rays of Mediterranean sun coming through the windows of the legendary Hotel Le Sirenuse in Positano, Italy, lent them a natural glowy filter (and certainly elicited envy from the other end of the phone).

Sersale and Alvarez Murena’s story is inherently intertwined with the the iconic location — an 18th-century palazzo that was turned into a luxury hotel by Sersale’s father and his siblings in 1951. Ever since, it has attracted an international audience of renowned intellectuals and celebrities, and, in modern times, dominates the Instagram accounts of influencers, high-flying travelers and fashion lovers alike.

As the hotel turned 70 this year, the Eau d’Italie brand marked its 20th anniversary by continuing its mission to exemplify the Italian lifestyle in its fragrance collection, which also includes ambiance scents and body care products.

“In 2001, the hotel was turning 50 and big celebrations were to be staged in October with 400 international guests in attendance, but 9/11 changed everything. The whole world stopped,” recalled Alvarez Murena. In the following months, the younger generation of the family conversed and shared ideas on how to mark the milestone in lieu of the event when Sersale and Alvarez Murena came up with the concept of creating a fragrance that could “bottle the feeling of being at Le Sirenuse in summer.”

A Look at Olympic Style Over the Years

Although the couple didn’t have a background strictly focused on beauty — with Sersale boasting a career as a documentary filmmaker and Alvarez Murena with a past as journalist — the duo stepped into the niche perfumery arena to develop the juice and packaging of both the celebratory scent and related body care line for the hotel.

“We didn’t want a classic citrusy fragrance, but thought of replicating the smell of our terrace in summer, defined by the smell of terracotta warmed up under the sun,” continued Alvarez Murena, underscoring that the duo wanted to shy away from stereotyped representations of the Amalfi coast.

They embraced the same approach while designing the minimal packaging. “We are in a baroque palazzo but this place has a contemporary quality in it, such as our spa designed by Gae Aulenti. So we wanted the scent’s look to mirror this appeal and be modern in order to fit in every house, not just here,” said Sersale about the essential, white flacon.

The Eau d’Italie fragrance got immediate — and unexpected — visibility, as requests started to come through by the likes of 10 Corso Como in Milan and Colette in Paris.

“We thought it was so cool but the demand got unmanageable, so we had two options: either let go of this project or evolve it and open a small company,” said Alvarez Murena. The couple went for the latter and since 2004 has been expanding the Eau d’Italie offering, which currently counts 10 scents bearing names such as “Easy to Love” and “Un Bateau Pour Capri.” Drawing inspiration from different, Italian experiences, the range was enriched this year with the newest “Jasmine Leather” scent paying tribute to the country’s artisanal traditions.

Distribution gradually expanded, too, with products currently available at the hotel’s emporium as well as roughly 300 doors worldwide, ranging from Bergdorf Goodman to platforms such as beautyhabit.com in the U.S. The brand also has a flagship in Rome and e-commerce shipping in all Europe.

Throughout the years packaging underwent three revamps, the latest of which was designed to mark the 20th anniversary and set the tone for the brand’s future chapters. Transitioning to a more luxe interpretation, the founders maintained the linear silhouettes but revisited proportions. They additionally scaled back on the popping colors that used to distinguish the different scents: Now colored accents just outline the new labels that adorn the white lacquered glass flacons and mark the textured paper of the restyled outer boxes.

Each bottle is topped by a mirror-polished solid brass cap, which nods to the look of the hotel’s bar counter and is engraved with the two mermaids of Le Sirenuse’s logo. 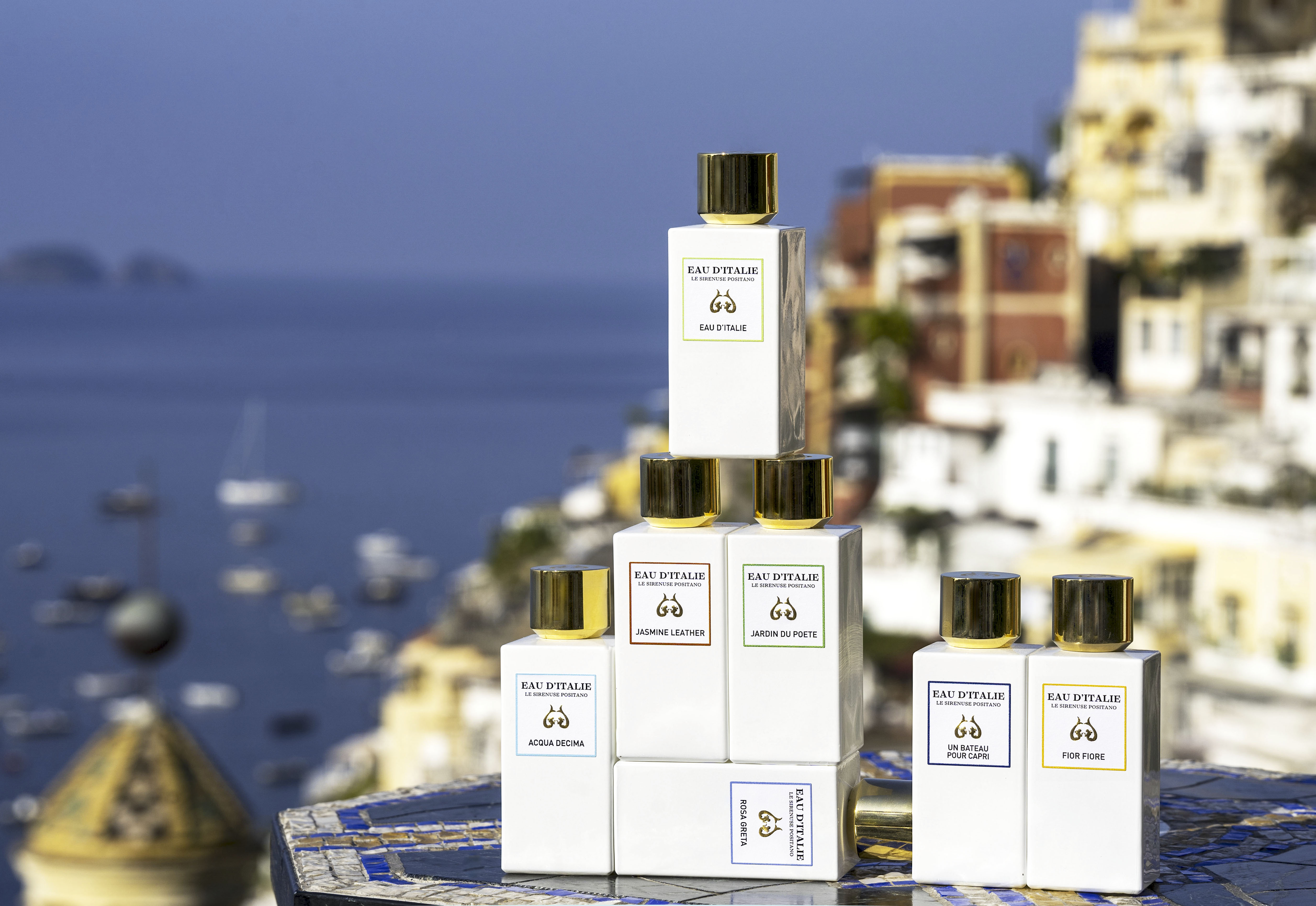 The Eau d’Italie collection of fragrances. Courtesy of Eau d'Italie

In sync with the image elevation, the couple also adjusted the price positioning to be more in sync with the brand equity and market conditions, which over the last years registered a spike in the demand of niche perfumes. Prices for each 100-ml. sized edp switched from 125 euros to 150 euros, or around 170 dollars.

Beside Italy, key markets for the label include the U.S, the U.K., Germany and especially Australia, where the brand is available at Mecca Cosmetica.

“We have had a little exposition in the Middle East, maybe because our look was perceived too Occidental. But over the past 10 to 15 years, Middle Eastern consumers have changed a lot and had such an interesting evolution, also in terms of taste, so it makes sense that we now explore that market,” said Alvarez Murena about future plans.

The company is also implementing a pilot launch in Japan to test the local market. “Even if Japanese consumers don’t have a long tradition in using perfumes, they appreciate the attention to details. We noticed in our sales points that these customers purchased our products not much for the fragrance per se but as a sort of sculptures to keep at home,” he said. “Plus, they love storytelling and we have plenty of that. So not sure what will happen in that market but it is worth a try.”

Meanwhile, with the experience gained from the Eau d’Italie project, the duo also launched a second, higher positioned brand. In 2012, Sersale and Alvarez Murena discovered by chance that their families crossed paths in Argentina centuries ago — the former is the great-great-granddaughter of entrepreneur James Morrison and the latter the great-great-grandson of General Bartolomé Mitre, who became unified Argentina’s first president in 1862 and opened the country to foreign investments, including Morrison’s.

The ancestral link inspired the couple to create Altaia, acronym for “A long time ago in Argentina,” and celebrate their storytelling through fragrances. The brand now includes seven scents, ranging from “Don’t Cry For Me” to the newest “Atacama” fragrance. 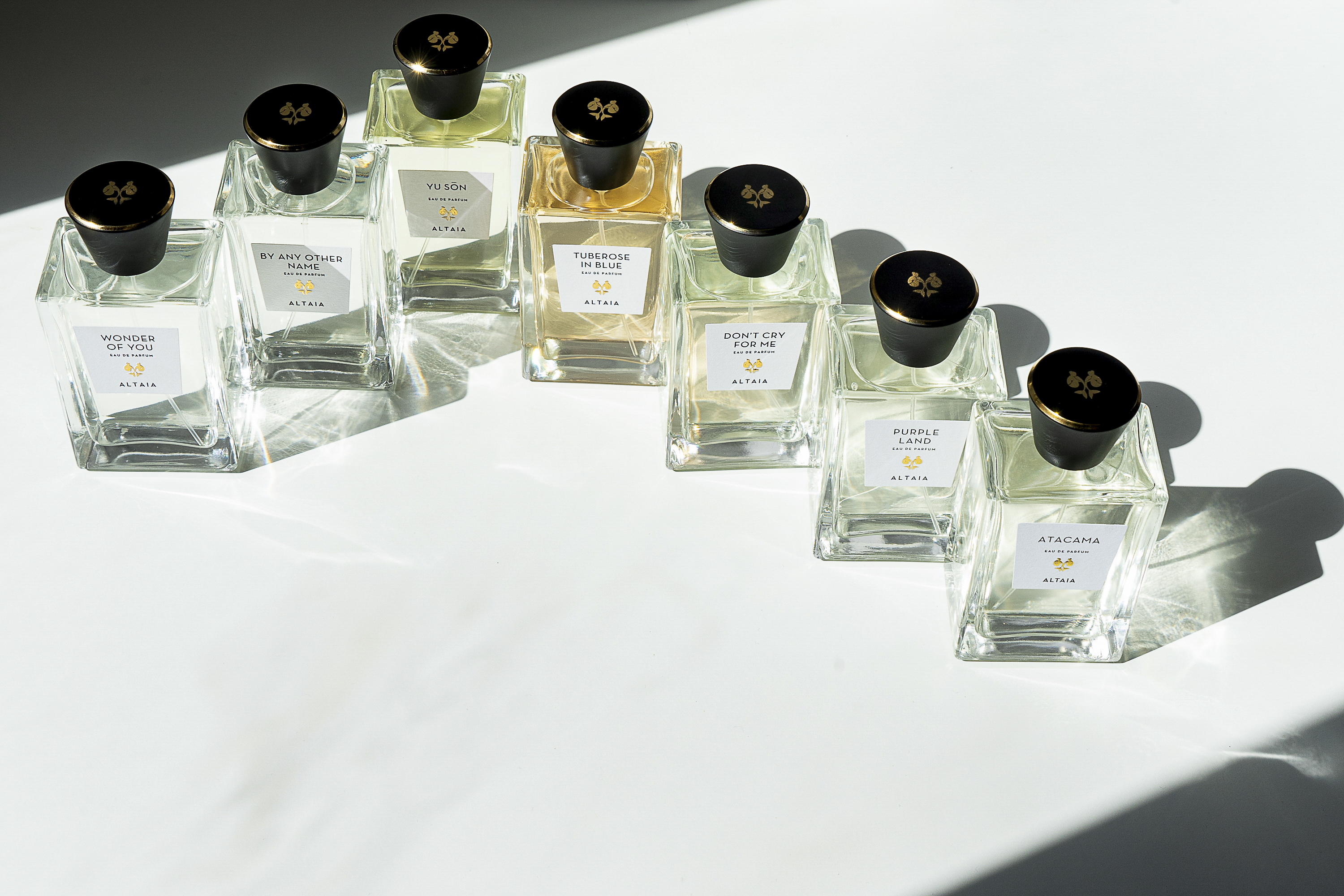 Retailing at 175 euros each, the Altaia scents are distributed via the same channels as Eau d’Italie’s, but the couple’s ultimate plan for this brand is to keep it strictly focused on perfumery rather than exploring other categories.