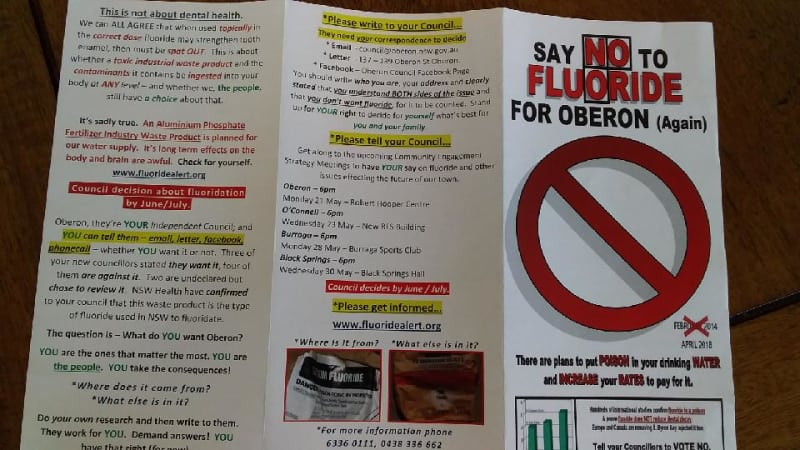 The NSW Health Minister, Brad Hazzard, has rejected calls to force towns like Oberon and Byron Bay to fluoridate drinking water, saying consultation was more effective than forcing compliance with a "baseball bat".

Mr Hazzard said local and state governments had a "duty of care to try to win the debate," and convince councils to add fluoride into the water.

The NSW health department is expected to send Oberon residents an information package this week on the benefits of fluoridation before council votes in July on whether to change its anti-fluoridation position.

But experts like Dr Wendell Evans, the co-chair of the Alliance for a Cavity Free Future, say local government does not have the moral or legal right to deny children and adults access to a proven and cost-effective health benefit.

Dr Evans, the former head of Community Oral Health at Sydney University, conducted much of the research into the impact of fluoridation in NSW.

Children under four from areas without fluoridation were admitted to hospital for removal of bad teeth at four to six times the rate as children in fluoridated areas, the presentation showed.

Because the benefits were proven, the government should either force councils to comply or apply stiff sanctions, Dr Evans aid.

The Opposition's health spokesman, Walt Secord, also supports a more punitive approach: If elected, he has promised legislation that would fine councils that refuse to fluoridate about $5000 a day.

About 97 per cent of NSW is fluoridated, but 17 of 83 local governments don't add fluoride to the water.

Mr Hazzard said some remote councils don't have access to the correct equipment and technical experts required to operate the system safely within the fluoride code.

And he agrees with the Opposition that the tactics used by the anti-fluoride campaigners are similar to the anti-vaccination lobby. 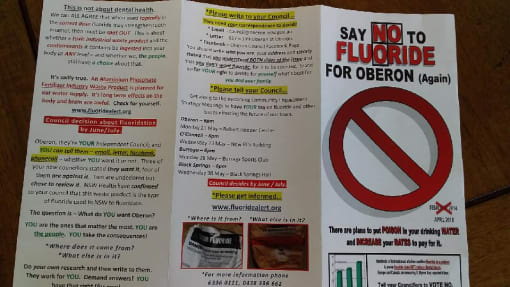 One of the many pamphlets dropped in letterboxes in Oberon before council debates whether to reverse its anti-fluoride position.

Campaigners against fluoridation had  "lots of fury and not much facts", said Mr Hazzard. "Anti-fluoridation campaigners have the same genetic make up as the anti-vaxxers," he said.

It is estimated every dollar spent on fluoridation saves as much as $7 to $18 in treatment costs.

Last year Mr Hazzard urged nine councils to reconsider, offering to pay all the cost of installing systems, plus offering funding to councils wanting to upgrade their equipment.

Since then, Gunnedah and Bega have voted in favour, Byron Bay has said it won't reconsider, while other councils such as Liverpool Plains have yet to reconsider.

NSW's 1957 legislation gives the secretary of health the power to direct councils to fluoridate, but Mr Hazzard said he believed more could be achieved with consultation "than with bashing them over the head and telling them what to do".  "It is so far going very nicely without using a baseball bat to beat them up."

Meanwhile the debate in Oberon is getting heated: residents' letter boxes have been filled with claims from anti fluoride campaigners calling fluoride a poison while local shopping centres have been dotted with posters urging residents to continue to fight against fluoridating. The local chemist is improving public awareness of the dangers of sugar by posting images of popular softdrinks, showing how many teaspoons of sugar are included in each.