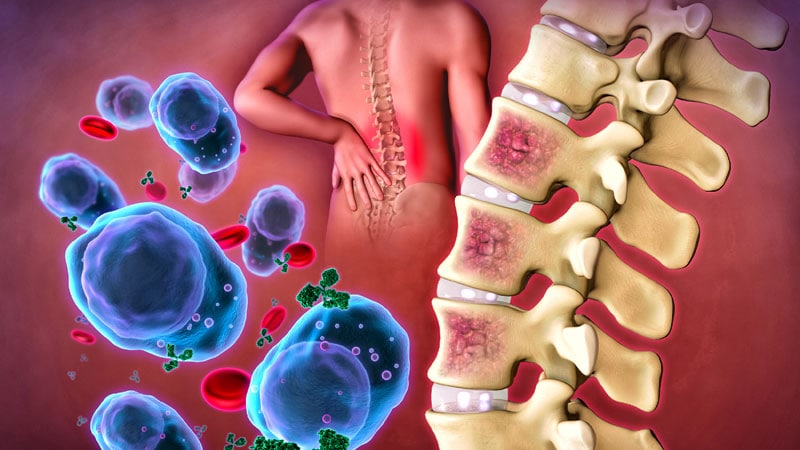 Following “unprecedented” results in a phase 1/2 study, teclistamab (Tecvayli, Janssen Biotech) received accelerated approval from the Food and Drug Administration for adults with relapsed/refractory multiple myeloma who had received at least four lines of therapy. Typically, patients in this situation have just a few weeks to live. The nod from the FDA on Oct. 25 for teclistamab, the first bispecific B-cell maturation antigen–directed CD3 T-cell engager to be approved, was based on data from a phase 1/2 study called MagesTEC-1 (NCT03145181; NCT04557098). Patients in the study showed an overall response rate of 61.8%, and 26.7% of people in the study had no detectable disease.

The first cut of the data appeared in the New England Journal of Medicine.

At the 6-month mark, 90.6% of patients who responded had no progression of their disease, and at 9 months, 66.5% of patients were still holding steady.

Senior investigator in the trial, Saad Usmani, MD, of Memorial Sloan Kettering Cancer Center, New York, said: “What was most striking was the high response rates and the durability of response.”

Usmani said ease of administration was the other aspect of teclistamab that impressed him. The drug is given by subcutaneous injection weekly after a short ramp-up period.

He contrasted this regimen with that of chimeric antigen receptor (CAR) T-cell therapy, the only alternative with similar efficacy in such sick patients: “I can prescribe [teclistamab] today, and my patient gets it tomorrow,” Usmani said. “With CAR T, I prescribe today and it will take 4-6 weeks for us to collect T cells and another 6-7 weeks for the product to come back.” Usmani said many patients die before CAR T reaches them.

Community oncology will benefit greatly from teclistamab, especially patients for whom CAR T isn’t feasible, said Kashyap Patel, MD, president of the Community Oncology Alliance. “My patients are most of them underserved minority-class populations with myeloma, and they cannot travel many miles to go to a CAR T center. With sub[cutaneous] injection, the patient can have [teclistamab] administered in their doctor’s office and continue to live their normal life.”

However, how should the wider oncology community make sense of a drug approval based solely on response in a single-arm, phase 1/2 study, with no survival data?

Patel said, “Phase 1 plus phase 2 data is probably a little bit quick, but time will tell eventually.” He cited melflufen as a cautionary tale: a product given accelerated approval for multiple myeloma, then withdrawn when new data showed that it increased the risk of death.

When Munshi was asked about trial design for accelerated approvals, he responded, “you are touching a topic very close to my heart, a topic of great significance currently.”

He went on to say that overall survival (OS) is no longer a viable trial endpoint in diseases like multiple myeloma for several reasons. Most significantly, he noted: “Survival has gone up to 10 or 15 years [so] today, if you randomize between one [drug] versus another, there are going to be seven or eight more treatments before the patient dies.”

Similarly, progression-free survival (PFS) in multiple myeloma is now as much as 5 years, Munshi said. “Do we want a patient to wait 5 years to get a very good new drug?”

For these reasons and others, Munshi observed, myeloma researchers are increasingly relying on a surrogate called “negative minimal residual disease” (negative MRD) – in other words, a situation in which myeloma cells can no longer be detected in the bone marrow. MRD is hunted out using next-generation flow or next-generation sequencing of myeloma-cell DNA from bone-marrow aspirate to levels as low as 1 in 100,000 or 1,000,000 cells.

In 2020, Munshi and colleagues published a large meta-analysis showing that a negative MRD in a patient with multiple myeloma was significantly prognostic for both progression-free survival (hazard ratio, 0.33; P < .001) and overall survival (HR, 0.45; P < .001). The team concluded: “MRD can fulfill all the prerequisites to be a clinically valid surrogate biomarker for PFS and OS in [multiple myeloma].”

In MajesTEC-1 overall, 26.7% of patients on teclistamab had no signs of residual disease at a threshold of 1 in 100,000. Among patients who showed a “complete response” by International Myeloma Working Group criteria, 46% had no residual disease.

Munshi stressed that such patients are not necessarily “cured.” It will take a few more years to prove that. He noted: “Simply, physiologically, [negative MRD] means that if a patient has one [myeloma] cell in a million, that cell is going to take a much longer time to grow up to be myeloma.”

On Nov. 8 and 9, the FDA and the International Myeloma Society held a workshop to discuss the vexed question of surrogate endpoints and single-arm studies for drug approvals entitled the “Future of Drug Development in Multiple Myeloma.” Munshi was cochair.

A panelist at the meeting who was a senior investigator in the MajesTEC-1 trial, Ajai Chari, MD, professor of medicine at the Icahn School of Medicine at Mount Sinai, New York, summed up the dilemma: “No one disagrees that randomized studies are the best way of doing things. The question is, if you’re a patient who’s exhausted all available therapies, do you have that time to wait? … The role of accelerated approval is to get the drug to the patient faster. But what does it not pick up? How do we make these accelerated approvals more meaningful and not have to retract for safety?”

Jonathon Vallejo, also on the panel, agreed that safety was the key worry. The ideal scenario for accelerated approval would be a drug that was better than available therapy, and “in some sense, it’s much safer.” However, such situations are rare.

“Most of the time, we don’t have these products that come in that have no toxicity signals,” he said. “So one thing we have to think carefully about in the single-arm trial setting is, what are the toxicities? How do they stack up?”

Chari said that, for his part, he wanted to see more transparency around “cause of death” in all studies that lead to accelerated approvals. He said he was “tired” of seeing a death labeled as “not attributed” to the drug by the investigator or the drug company.

“Let me decide. Show me the deaths, and show me the myeloma status at that point,” Chari said. “That’s a signal – if you’re a responding patient and dying, then the FDA should be a little bit more cautious.”

The FDA has added a boxed warning to the teclistamab product information concerning cytokine-release syndrome and neurologic toxicity.

Cytokine-release syndrome, the most common side effect overall, showed up in 72% of patients, typically 2 days after the first step-up dose.

Because of its safety profile, teclistamab is available only through a restricted program called TECVAYLI Risk Evaluation and Mitigation Strategy.

The continued approval of teclistamab for this indication “may be contingent upon verification and description of clinical benefit in confirmatory trials,” according to the FDA.

To that end, eight more studies of teclistamab are underway, aiming for approximately 1,300 multiple myeloma patients around the world. Three of these trials are in newly diagnosed patients. Four more studies are planned to come online in the next 3 months, raising the final tally of patients testing out teclistamab to approximately 4,700. The trials will look at teclistamab in sequence or in combination with standards such as bortezomib and pomalidomide. All studies are open label.

Patel believes that, until these trials say otherwise, the benefits of teclistamab outweigh the risks. “I’m very happy we have one more option in this space, particularly the fourth or fifth line for patients who want to continue to fight the disease,” Patel concluded.