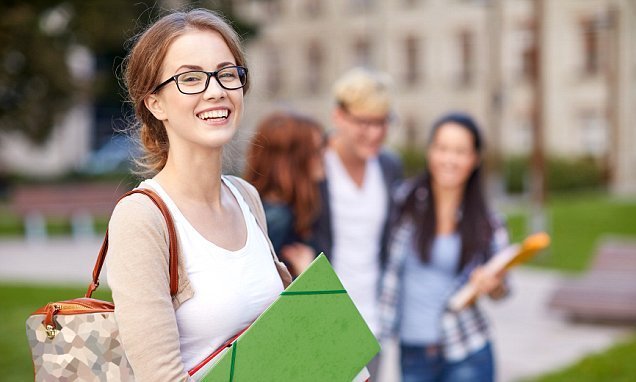 Well-educated people have a price to pay for spending years studying: they are more likely to be short-sighted.

Scientists have discovered the length of time someone spends in education is linked to a greater risk of short-sightedness.

Previously, scientists knew people with more education were more likely to be short-sighted – known as having ‘myopia’ – but could not prove whether one caused the other.

But a new study by Bristol and Cardiff University researchers, published in the BMJ, has found ‘strong evidence’ length of time in education did cause eye problems.

Researchers warned that eye development happens during school years and said the results had ‘important implications’. Scientists say people who spend more time in education are more likely to become short-sighted, and the number of short-sighted people worldwide is expected to triple in 32 years

Up to half of adults in Europe are short-sighted but levels are as high as 80 to 90 per cent among school leavers in some East Asian countries, where education is notoriously intensive.

Based on existing trends, the number of short-sighted people worldwide is due to triple to 5 billion by 2050.

The researchers said: ‘[Governments] should be aware that the educational practices used to educate children and to promote personal and economic health may have the unintended consequence of causing increasing levels of myopia and later visual disability.’

Around one in ten of those are expected to suffer ‘high myopia’ which carries a risk of blindness.

HOW TO KEEP YOUR EYES HEALTHY

Australian eye expert Handan Otay has some simple tips for trying to keep your eyes health:

Look into the distance

‘Gazing off into distances further than six metres away relaxes the eyes.’

‘Kids need to get outdoors so they’re relaxing their eyes and not concentrating on close activities all the time.

‘It is recommended that they wear hats and sunglasses to prevent damage from UV radiation while still getting the benefit of sunlight.’

‘Children with vision impairment may rub their eyes more often or have difficulty seeing things at night.

‘They may also have hand-eye coordination issues and hold things closer to their faces. If any of these behaviours are consistent over time, seek assessment.’

Scientists believe analysing data based on genes is a more reliable way of randomising studies to ensure results are not biased by other influential factors, like people’s wealth or healthier lifestyles.

Results showed every additional year of education was associated with an increase of minus 0.27 dioptre – a measure of how effectively the eye’s lens refracts light.

It means a university graduate from the UK with 17 years of education would, on average, be at least minus 1 dioptre more short-sighted than someone who left school at 16 – a level which would mean needing glasses for driving.

By contrast, researchers found little evidence to suggest being short-sighted led people to remain in education for longer.

Study author Denize Atan, of Bristol University, said today’s children may be even more likely to be become short-sighted.

Screen time and staying indoors may contribute to eye problems

This is because they spend more time looking at screens and less time outdoors than the participants of the study had in their childhood.

Dr Atan said: ‘With increasing urbanisation and our greater reliance on screen-based technologies, we are now spending less time outdoors.

‘Based on the highest quality evidence currently available, the best recommendation is for children to spend more time outside [to reduce the risk of myopia].’

In a linked editorial, Professor Ian Morgan of the Australian National University, said education systems ‘must change to help protect the visual health of future generations’.

He pointed to problems in East Asia and warned against introducing similar ‘intense educational pressures such as homework at preschool level, combined with little time for play outdoors.’