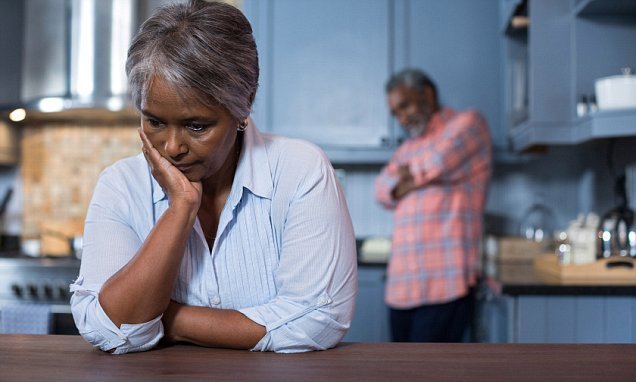 The research on nearly 300 married people with arthritis and diabetes showed one fight was enough to leave them with worse symptoms for days.

It didn’t have to be a groundbreaking argument: even feeling ‘tension’ in their relationship was enough to aggravate their pain, the Penn State Center for Healthy Aging study found.

While previous studies have examined how marriage impacts health over a long period, this is one of the first to explore how day-to-day emotional interactions affect a person’s physical well-being. 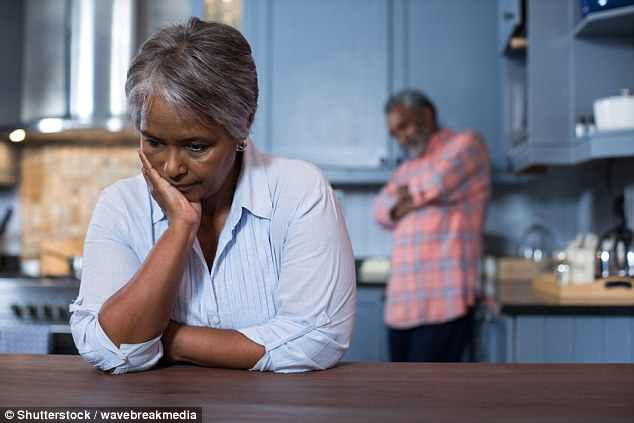 Patients with chronic conditions such as arthritis or diabetes experience more severe symptoms on days they fight with their spouse, a new study has revealed

Participants of both groups kept daily diaries about their mood, how severe their symptoms were, and whether their interactions with their own spouse were positive or negative.

The members in the arthritis and diabetes groups kept their diaries for 22 and 24 days, respectively.

The researchers found that the individuals with chronic conditions were in worse moods and experienced more severe symptoms on days with more marital tension.

Particularly, within the group with knee osteoarthritis, those who experienced more pain were in a worse mood the nexy day as well as continuing marital tension.

It is the latest in a long line of research on marriage and health. Last year, a study published in the Journal of Neurology, Neurosurgery and Psychiatry found that marriage could help lower the risk of dementia.

And a special issue of American Psychologist stated that an individual’s management of coronary heart disease could be made better or worse by whether that person’s marriage is going well or not.

Additionally, studies have shown that experiencing stress or anxiety produce high levels of the hormone cortisol, which can have a number of effects on the body including altering your immune system and suppressing digestion.

A study published in August 2017 found that married people are 14 percent more likely to survive a heart attack than those who are single.

This is thought to be due to spouses nagging each other to live a healthy lifestyle, the research adds.

Husbands and wives can also be relied upon to remind the other to take their medication and generally help them to cope with their condition, researchers said.

Lead author Dr Paul Carter, from Aston University in Birmingham, said: ‘Marriage, and having a spouse at home, is likely to offer emotional and physical support on a number of levels.’

Another hormone produced in high-stress situations, adrenaline, can increase your heart rate and elevate your blood pressure.

Lead author Professor Lynn Martire of human development and family studies at Penn State said it’s important to learn more about how and why symptoms of chronic disease worsen.

She explained that individuals with knee osteoarthritis who experience greater pain can become disabled quicker, and that those with uncontrolled diabetes are at greater risk of developing complications.

‘This almost starts to suggest a cycle where your marital interactions are more tense, you feel like your symptoms are more severe, and the next day you have more marital tension again.

‘We didn’t find this effect in the participants with diabetes, which may just be due to differences in the two diseases.’

Professor Martire said the results, which were published in the journal Annals of Behavioral Medicine, could help create interventions targeted at helping couples with chronic diseases.

‘We usually focus on illness-specific communications, but looking at tension in a marriage isn’t tied to the disease, it’s not a symptom of the disease itself,’ she said.

‘It’s a measure you can get from any couple. It suggests to me that looking beyond the illness, to improve the overall quality of the relationship might have some impact on health.’