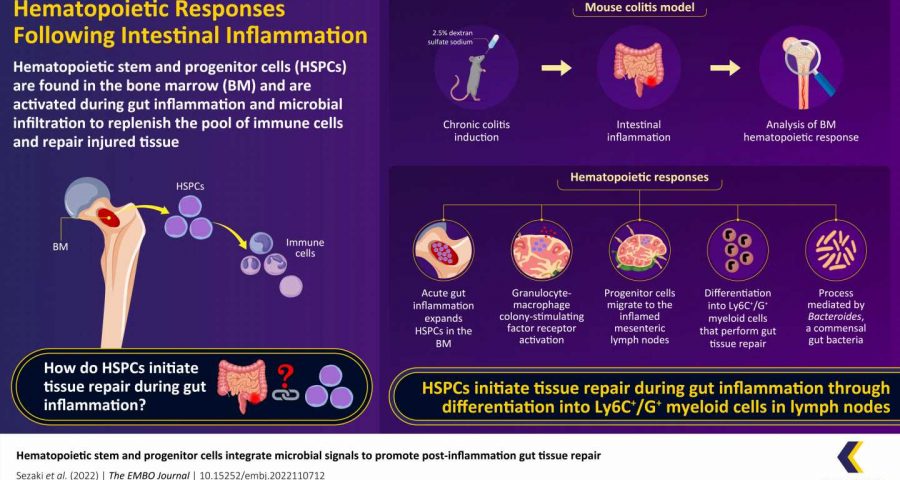 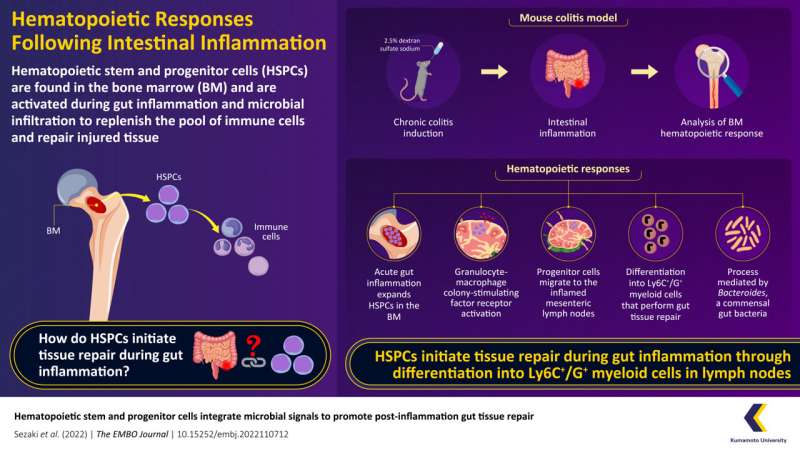 The human body contains an array of coexisting commensal microbes, primarily gut bacteria, which have been linked to the regulation of hematopoiesis, or the production of blood and its components (including immune cells).

However, how the hematopoietic system manages microbial signals and maintains tissue integrity in the presence of inflammation is still unknown. Scientists from Kumamoto University in Japan now shed light onto the mechanisms that underlie tissue repair during inflammation in the gut.

The immune cells in our blood are pivotal in fighting infection and repairing injured tissues. But where do they come from?

The bone marrow (BM) contains hematopoietic stem cells (HSCs) that produce multiple types of blood cells—including immune cells—throughout their lives. In the event of an attack by bacteria or viruses, HSCs are triggered to produce more immune cells to fight the infection as well as repair injured tissue by differentiating into multipotent progenitor cells (MPPs).

However, the exact role of hematopoietic stem and progenitor cells (HPSCs) in the repair of damaged intestinal tissues is not fully understood, especially given that the BM and intestine are located far apart from each other.

The commensal gut microflora is important for the regulation of physiologic processes in the body. According to research, depletion of this flora weakens the immune system and makes people more susceptible to infections. So, it is possible that these gut microbes either directly or indirectly regulate hematopoiesis, but there is little evidence explaining how this regulation works when the gut is inflamed as a result of enteric colitis.

In a study published in The EMBO Journal, a research team led by scientists from Kumamoto University discovered how intestinal tissue repair proceeds via microbial and immune signals that drive the differentiation of HPSCs.

“We show the cross-organ communication between the BM and the inflamed gut that translates microbial signals into the production of specific progenitor cell lineages that contribute to intestinal tissue repair,” says Professor Hitoshi Takizawa, the corresponding author of the paper.

The study was conducted using a colitis model in mice, which closely mimics the pathogenesis of inflammatory bowel disease (IBD) in humans. The researchers first used dextran sulfate sodium (DSS) to induce chronic colitis in these mice and then studied their intestinal inflammation and BM hematopoietic response.

They observed that acute gut inflammation prompted the activation and expansion of HPSCs in the BM. These cells then migrated to lymph nodes close to the site of inflammation—i.e., the mesenteric lymph node (MLN) near the intestine—via the circulation and spleen. This process was controlled by the upregulation of granulocyte-macrophage colony stimulating factor receptor (GM-CSFR) expression on HSPCs, and its ligand in the BM and MLN.

RNA sequencing of MPPs from colitis-induced mice revealed significant changes in the expression of 80 genes in the BM and 215 genes in the MLN involved in inflammation and cell metabolism. Interestingly, this migration of HSPCs to the MLN observed in mice has been seen in humans with IBD as well, and suggests a conserved mechanism could be at play.

Metagenomic analysis was performed on antibiotic-pretreated mice to determine what triggers this expansion of HSPCs. The screening revealed that the gram-negative Bacteroides were the most abundant HSPC-regulating bacteria, and they control the expansion of HSPCs after a colitis attack through innate immune signaling.

On reaching the MLN, HSPCs possibly differentiate into a specific cell subtype expressing the surface antigens Ly6C+/G+ that resembles myeloid-derived suppressor cells. These cells are capable of repairing the intestinal tissue. When HSPC migration to the MLN is blocked, gut inflammation appears to worsen. “These findings suggest that by sensing local demands, HSPCs have the potential to differentiate into immunosuppressive cells in the MLN and these cells can potentially promote gut tissue repair after colitis,” explains Professor Takizawa.