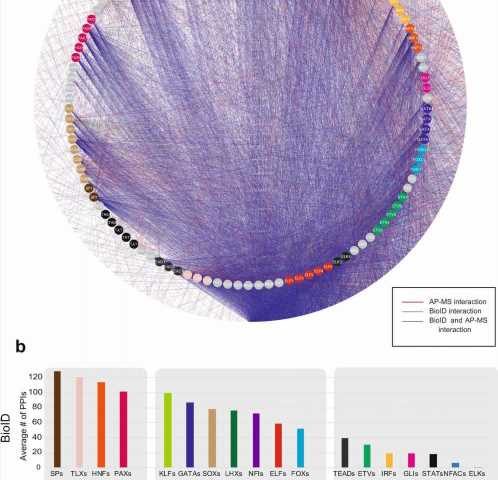 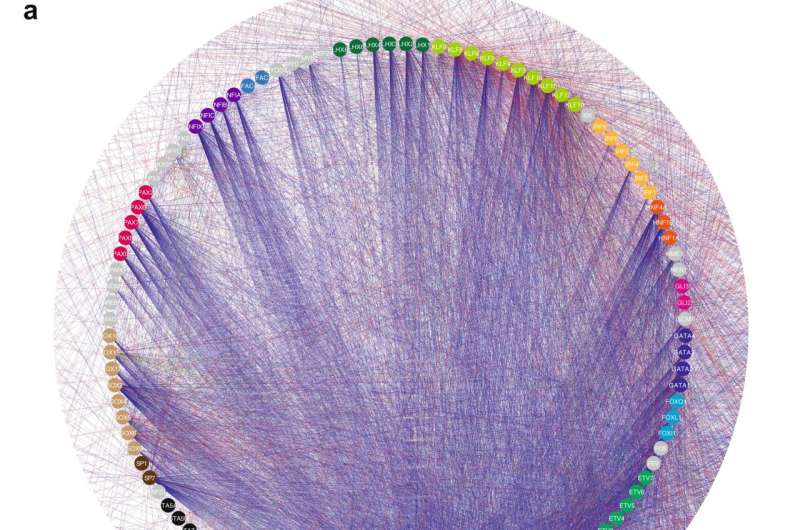 Transcription factors (TFs) are the most essential protein group for the cellular development, differentiation and maintaining homeostasis. They drive complex patterns of gene expression in cells in all stages of development. Defects in TF signaling often lead to developmental disorders and diseases.

However, while TF DNA binding has been widely studied, we are still lacking a systems-level understanding on how TF activity and signaling is controlled via their interactions with multiple proteins, such as cofactors, dimerization partners, chromatin modulating proteins, enzymes, inhibitory proteins and general transcription factors.

A research team at the University of Helsinki decided to initiate a large study to shed light on TF protein-protein interactions and TF regulation. The new study is published in Nature Communications.

“We introduced a comprehensive interactome analysis of more than 100 TFs, revealing over 7,000 TF protein-protein interactions, most of which are in nuclear and play important roles in transcriptional regulation,” says Research Director Markku Varjosalo from the Institute of Biotechnology, HiLIFE.

Findings pave the way for further studies on the TF regulation

The large number of TF interactions discovered in this study enabled researchers to conduct a systems-level analysis that revealed groups of TFs with specific biological functions, such as chromatin remodeling and RNA splicing.

“Interestingly, almost half of the studied TFs interacted with the nuclear factor family of TFs. Nuclear factors are known to control a plethora of genes and organogenesis during development and their aberrant activity is linked to several human cancer types. Our data suggest that transcription control by NFIs may be regulated by nuclear factor interactions with other TFs,” says Dr. Helka Göös, the lead author of the study.

The study provides the first comprehensive and complimentary overview on the physical and functional interactions of the human transcription factors. The new findings pave the way for further studies on the TF regulation.